I awake to Alexa’s semi-robotic-voiced weather report and news headlines. My Apple Watch notifies me that I only slept six hours last night, and then my iCalendar app shows me what’s on tap for the day.

After a quick coffee and banana, I’m off for a run using my Strava app that tracks my heartbeat, distance and location.

Google Maps knows my route to work and tells me the commute time as well as the best route before I even leave the house. By tracking users currently riding on the subway, it knows the system better than the Metropolitan Transportation Authority.

When the workday starts, my favorite digital news sites, Bloomberg and the Wall Street Journal, are filled with ads for products that I may have been looking for in the past month, and others that I wasn’t even considering.

A few years ago, Amazon filed a patent for “anticipatory shipping,” which would send items to shipping hubs in areas where it believes said item will meet customer demand.

Will tech eventually know our decisions before we make them?

Running to a dinner meeting later that day, I’m using both Uber and OpenTable to arrive on time and check in.

Finally returning home for the night, I collapse on the couch, and Netflix suggests I might be interested in watching the new season of “Black Mirror.”

While I might be considered a heavy tech user, I’m not alone. There are 2.2 billion Facebook users and 2.5 billion people with a smartphone. Google, the gatekeeper of the internet, processes 3.5 billion searches per day.

With recent data breaches at Facebook and Equifax, should you be worried who controls your data?

The mega-cap tech companies have become our benevolent tech overlords, making our lives more productive in exchange for harvesting our data for their own commercial benefit.

I haven’t had an issue with sharing all my information with the tech oligopoly because, so far, the benefits have outweighed the intrusiveness. Also, nobody has developed an alternative.

Shares of social media giant Facebook Inc. (Nasdaq: FB) were hit hard following news that it provided a Trump-affiliated data firm, Cambridge Analytica, with the private information of 50 million users. Compounding the issue, Facebook failed to inform those users their data was being harvested and utilized for political gain.

Regardless of political affiliation, it’s unsettling that a benign activity such as liking someone’s post on Facebook could later be weaponized to influence a political election.

But the mother of all data breaches happened last year at Equifax, where more than 147 million Americans had their personal credit information exposed.

The Facebook and Equifax debacles suggest it’s time to start looking for a solution to the centralized model, as the costs of trusting such entities is beginning to outweigh the benefits.

One of the promises of blockchain technology is the creation of a new, decentralized internet. In blockchain-based systems, a distributed network of computers is tasked with storing and maintaining data. To accomplish this task, this network is rewarded with a monetary unit known as a cryptocurrency.

This new platform removes the need for a centralized authority to control the data, making it next to impossible for a hacker to breach everyone’s information simultaneously.

Blockchain may usher in a new digital world where users control their own data. This would provide all the benefits of using modern technology without blindly trusting the tech oligopoly with your decisions, health data and whereabouts.

One project in development, Blockstack, bills itself as a “new internet for decentralized apps.” This new technology combines a decentralized identity system, domain name registry and storage network to recreate a functional internet along decentralized rails.

Investors are betting that this bold idea has merit. Blockstack raised $52.8 million in a December 2017 initial coin offering to build out a new, decentralized internet infrastructure.

As part of the deal, Blockstack issued 440 million tokens, which will be redeemable for internet protocol operations such as registering domain names or creating new digital identities.

According to the Blockstack white paper:

The token is a utility token that is meant to have use only on the Blockstack network. An analogy would be an arcade token that works only inside an arcade to play video games and is “consumed” when you use it to play the video game. The Blockstack token, if and when it is successfully developed and deployed, will give token holders the ability to use the Blockstack network by registering digital assets like domains, user IDs and applications on the network.

The funding round was led by crypto heavyweight firms such as Union Square Ventures, Foundation Capital and Digital Currency Group, and the tokens issued will be available to trade later this year.

We are years away from a true, decentralized internet where users control their private information. However, future malicious data breaches will facilitate this transition as consumers demand more privacy protections and entrepreneurs look to fill this need.

While I’m not giving up my Alexa anytime soon, a tweet from Amazon CEO Jeff Bezos is somewhat unsettling when you think about the term “future overlords”: 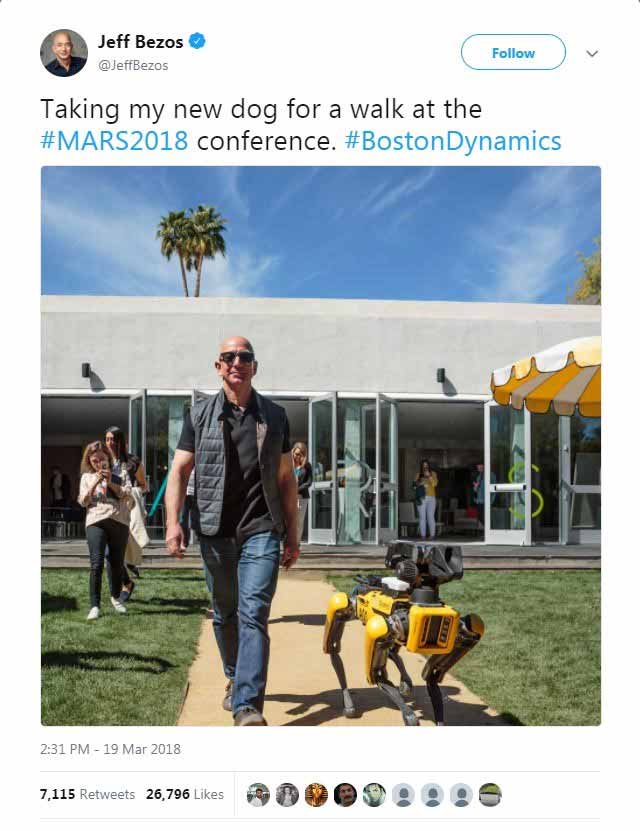