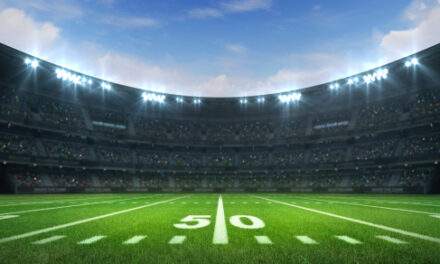 Super Bowl LVI is over. This week, the post-game traditions will play out.Fans will argue that the refs blew some calls. And they did.Almost everyone will form an opinion about the commercials. Personally, I liked GM’s Sopranos commercial.But more strangely, some traders will claim the outcome of the game is bullish for the stock market.That’s based on the Super Bowl indicator. It shows that the S&P 500 Index has performed better, and posted positive gains with greater frequency, after Super Bowls when NFC teams (like the Rams) have won.It sounds silly and even a bit arbitrary. But I spent some time thinking about this. And as it turns out, the Super Bowl indicator should actually work, because it’s actually an economic indicator.At least, it should have worked in the past. I doubt that it does now.To understand why, a brief history lesson is in order…

The NFL was organized in 1920 with teams located in Cleveland, Detroit, Rochester, Chicago, and other cities in the part of the country we now call the Rust Belt. Over the years, the league expanded to include cities beyond the Midwest, but it remained centered in that part of the country.By the 1950s, the country’s economy was enjoying the benefits of the post-World War II boom, creating more wealthy individuals than at any other time in history. Wealthy men around the country wanted to own football teams, but the NFL turned down most applications.This led to the formation of the American Football League (AFL) which opened up a ground-floor opportunity for wealthy individuals to own teams.Team names such as the New York Titans and San Diego Chargers reflected the ambitions of their owners. Other team names, such as the Houston Oilers, reflected their source of wealth.By the 1960s, the NFL-AFL rivalry came down to old money versus new money. This was a struggle between the economy of the Old America, which was based on industry, and the New America economy, which was based largely on oil and technology.The two leagues eventually merged, with most of the NFL becoming the NFC, and the AFL and several NFL teams becoming the AFC.Teams’ fortunes, to some degree, were tied to the economic strength of their host cities. Fans in a city mired in recession won’t be able to attend as many games and will spend less at the concession stands. Owners of these teams will have less money to spend on the team and may be unable to compete for the best players.When an NFC team wins the Super Bowl, it shows that owners in the Rust Belt or other areas associated with the Old America could assemble a winning team because the fans had money to spend. Victory by an AFC team shows the economy of the New America is doing better than the economy of the Old America.This all means there is a simple explanation for the widely panned Super Bowl indicator…The stock market reflects the core of the economy, and the success of a football team reflects the economy of its home city. It’s as simple as that.But here’s the problem…

Shortly after I figured all that out, I realized the indicator had stopped working.My research started anew so I could understand if I missed something or if the economy had changed.As I explained in Great Stuff over the weekend, the NFL changed. Television money and a degree of socialism nullified the importance of a team’s local economy. I won’t repeat all of that here but if you are interested in how socialism and capitalism affected the NFL, be sure to check that out.The point I want to make here is about indicators. Many traders slap an indicator on a chart, google how to generate trade signals and then complain when they lose money.Maybe the indicator doesn’t work. Certainly, the trader didn’t do any work.Trading is hard work. You have to study an indicator to understand what it does. Once you see how it should perform, you need to be sure that its historical performance meets expectations.Then you need to monitor performance. If actual results differ from the expected results, you need to search for the reason why.In 1993, while reading about how Fox would begin broadcasting NFC games on Sundays, I didn’t realize that would mean the end of the Super Bowl indicator. But it changed a relationship that had held for 25 years.When an indicator stops working, there’s often a story like that to explain what happened. While it’s hard work to uncover the story, it’s well worth the effort since it can avoid trading losses and point you to different strategies that do work.Regards,

Chart of the Day:Price Action Rebellion 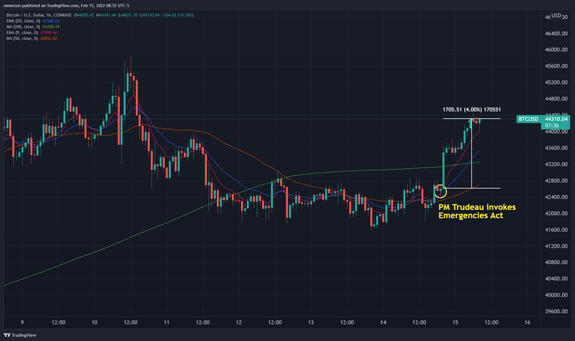 Something unusual happened with the bitcoin price last night.At about 8 p.m. ET, Prime Minister Trudeau invoked the Emergencies Act for the first time in Canada’s history. This was, of course, in response to the trucker protests and blockade occurring in Ottawa.To my understanding, the Emergencies Act gives the Canadian government several emergency powers, including the ability to limit civilian travel, use or dispose of property, and more directly manage essential services such as police and firemen.But most importantly to our chart today, the Act allows the Canadian government to intervene in the flow of funds to the Ottawa protestors.Per the Financial Post:

Banks will be given the authority to review accounts of those they suspect to be part of the blockades and freeze their money. Crowdfunding platforms and cryptocurrency platforms will now have to report any suspicious or large transactions to authorities, as banks currently have to.

In response, bitcoin has jumped as much as 4% overnight.To my memory, this is the first time that news of a nation interfering with the use of cryptocurrency has caused the market to rally. It’s usually met with fear.This is rebellious price action.This is far too short-term to call a trend, but it is interesting to see that cryptocurrency proponents are seemingly no longer scared of what governments think of them. Should these restrictions accelerate, it could mean a boon to the price of cryptoassets. Regards, 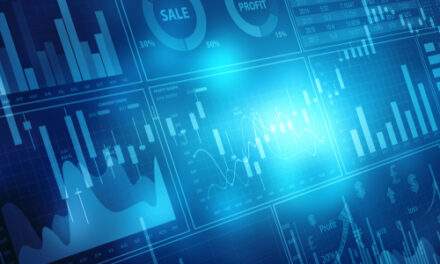 Unusual Options Activity: THIS Is How Pros Trade Earnings 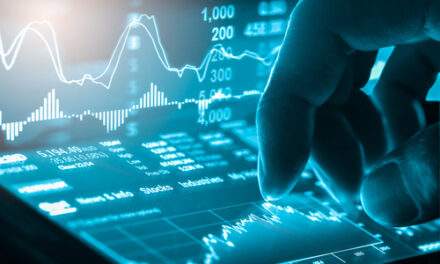