Augmented Reality Will Be Part of Our Daily Lives

Digital reality, which includes augmented reality (AR) and virtual reality (VR), is set to grow to a $162 billion market by 2020, according to IDC. And I personally believe AR is set to be the winner in this market, for a few reasons.

First, augmented reality doesn’t require the user to wear a big, clunky headset. Nobody wants to wear that for hours; it’s uncomfortable if worn for long periods of time, and you have to take it off to do anything else. With the amount of time that people spend multitasking now, that won’t work.

The only alternative right now is being in a “virtual reality booth.” While it looks interesting, people aren’t going to have these big spaces set aside in their homes.

So the second reason VR won’t be as big is because selling to individual consumers is the only way that anything new in the gaming industry can get off the ground nowadays.

Next, virtual reality right now is mostly limited to gaming. And gaming, especially with a big headset on, does not appeal to the majority of the general public.

I do realize that VR gaming headsets are selling well. There is a place for them, and they will be part of the bigger digital reality picture. But I believe that AR will end up being the dominant force in this market.

So what is augmented reality? Put in basic terms, it’s anything projected on a screen or display that isn’t really there.

An example that everyone has seen is the yellow line during football games that marks the next first down. It’s actually been around since 1968, although it doesn’t look anything like it used to (thankfully).

There was also Google Glass, which was Google’s own AR “headset” in the form of glasses. The product was highly anticipated by the tech market, but not really anyone else.

Its release in 2014 was a bust, and it was discontinued the following year. That was primarily due to its $1,500 price, as well as the fear that Google was secretly recording people.

But now, this technology is exploding to the point where we could use it multiple times every day.

At this point, most AR is done through smartphone apps, which is convenient because our phones are always right in front of us.

For example, Amazon has an app called Amazon AR that allows customers to visualize its products in the real world: 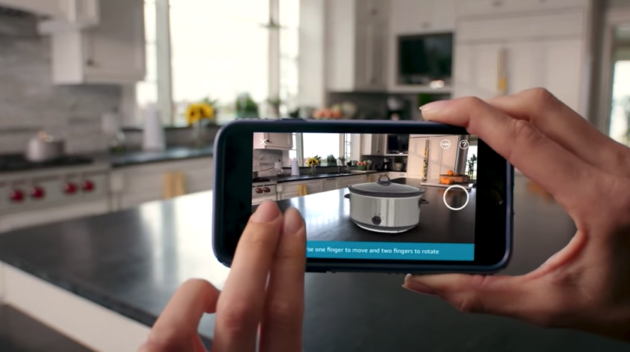 One of the main reasons that people don’t want to shop for home goods online is because they want to be able to actually see the product in real life. But until now, this involved having to go to the actual store and then imagining what the product would look like at home.

The AR technology in this app lets you actually see a virtual version of the product in real life, which eliminates having to go to the store to pick something out. Shopping online is quicker and easier for browsing, too; you have hundreds of products right in front of you, and now you can see what they would look like in your home.

Ikea has a similar app called Ikea Place. One of the most tedious parts of buying furniture is having to measure all of the dimensions and then trying to estimate if the piece of furniture that you want will fit. But with the app, you can see what any “actual size” piece of Ikea furniture would look like in your home.

Augmented reality is also proving its worth to manufacturing companies. For example, Ford and Volvo are using AR in their automobile design process. Now, instead of having to build a physical clay model of every car, they can visualize it with augmented reality: 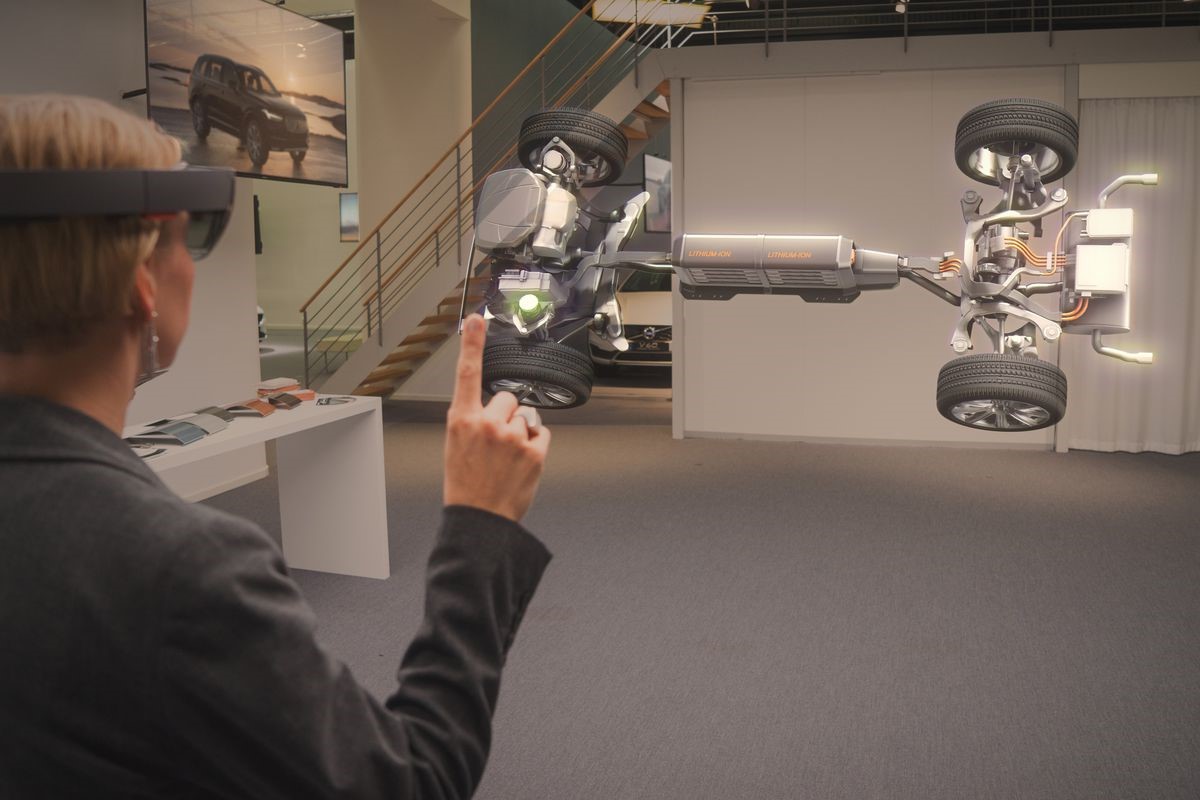 This technology can save a lot of time and money that’s spent fixing mistakes and guessing how to create or improve an automobile’s functionality. Once this product is fully integrated, it will get rid of the entire prototype phase of automobile design, allowing manufacturers to roll out new models more often.

We can already get a glimpse of what else is to come with AR, as there are hundreds of different uses being figured out and developed.

Sticking with automotive uses, there’s an app being developed by a company called AR-media that lets you track maintenance and perform repairs on cars: 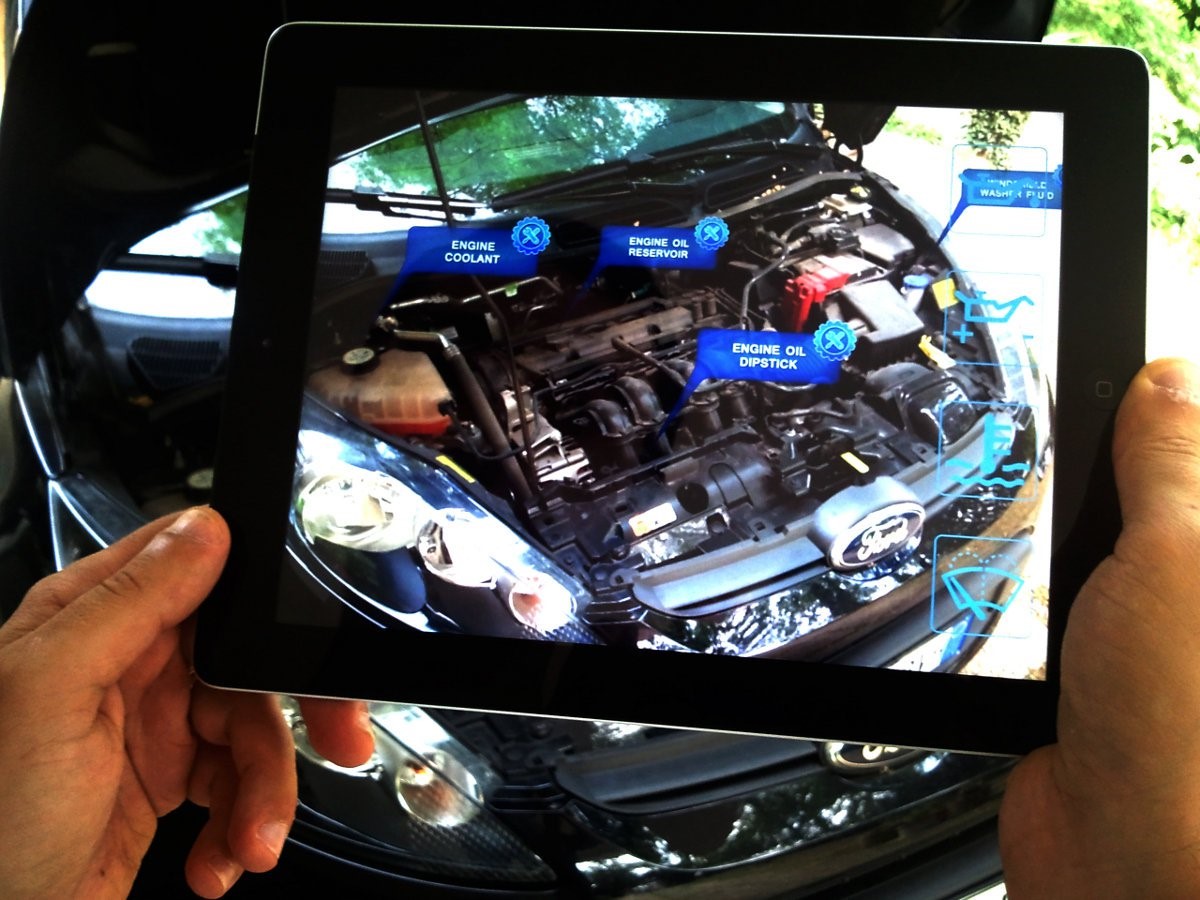 The app is called I-Mechanic, and it could really save people a lot of money by showing them how to perform routine maintenance on their cars.

Volkswagen actually was a pioneer with this technology when it created an app that could be used with its XL1 model. While it had the right idea with the technology, only 200 of those cars were ever sold to the public, so nobody could really use the app.

I-Mechanic will be available to use with a variety of car models, building on what Volkswagen started.

Lastly, believe it or not, there is a technology being developed to turn your windshield into an AR station:

While a “smart windshield” may be a distraction for drivers, the real potential here would be with self-driving or assisted-driving cars. The person in the car could use the windshield for things like GPS or getting information on nearby points of interest.

Augmented reality has taken the tech market by storm over the past couple of years, and it’s only just starting. For all the apps and features that I’ve explained here, there are hundreds more in existence or development.

There are also ways to invest in this technology.

Companies like Snap Inc. (NYSE: SNAP) and Apple Inc. (Nasdaq: AAPL) are creating augmented reality platforms that are being used every day by individuals and companies alike.

In 2018, I believe we will see exponential growth in the augmented reality market, and a significant immersion of the technology into our daily lives.

Editor’s Note: There’s a metal that’s in everything from airplanes to automobiles … batteries to boats … and surgical tools to smartphones. As you can imagine, demand is surging as America’s biggest companies scramble to secure more of this “magic” metal. And with such massive demand … and such limited supply … this could easily dwarf every commodity run-up in history — meaning that early investors stand to make an absolute fortune. To find out what this “magic” metal is … and which little-known company is sitting on billions of dollars’ worth of it … simply click here now.

The IoT Revolution Is Heating Up

Inside the Mailbag: Your Big Forecasts for 2018