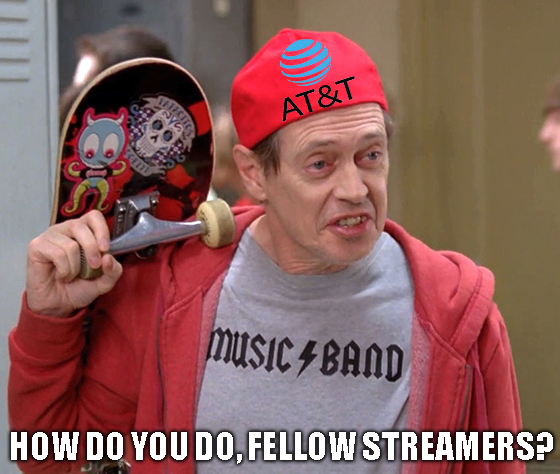 That’s what I should have been able to tell you today. But, in classic AT&T style, the company still managed to put investors in a bind.

HBO Max leverages the massive amount of content AT&T acquired from Time Warner, including thousands of hours of video from HBO, CNN, TNT, Cartoon Network and Warner Brothers, just to name a few. There’s programming ranging from Friends and Looney Toons to Game of Thrones and The Matrix.

The amount and diversity of content AT&T has available is truly staggering.

What’s more, all 34 million HBO subscribers will have free access to HBO Max once the service launches. It will also be included free in AT&T’s premium and unlimited wireless, TV and broadband plans.

AT&T expects to add 3 million subscribers per year with HBO Max, targeting 50 million subs by 2025. The company also plans to spend an additional $2 billion on content next year for the service.

That includes a new Game of Thrones spinoff titled House of the Dragon — a prequel that details the story of House Targaryen and will, thankfully, not be written by former showrunners David Benioff and D.B. Weiss.

“That’s great and all, Great Stuff, but I believe you’ve left something out!”

I have, and it’s central to why T shares are up only about 1% today on the news.

AT&T’s new HBO Max service will cost $14.99 per month, making it the most expensive basic streaming service on the market (insert faceplant here). The company is arguing that due to its massive catalog of content, customers will be willing to pay a premium for HBO Max.

The real reason, however, is that if AT&T priced HBO Max any lower, it would have to cut the price of its traditional cable TV service. If not for this, AT&T could have come out and destroyed the streaming market. But, as you can see, the company is still struggling with its old-school cable TV roots — faceplant, meet facepalm!

(Announcer voice initiated) In a world… where Disney+ is only $6.99 per month and Netflix’s standard subscription is only $12.99 per month, HBO Max is sure to give streaming consumers sticker shock. Existing Netflix subs can add Disney+ for only a few dollars more per month. This lofty price could force those same subs to make a tough choice on whether to keep Netflix or forgo HBO Max altogether.

Things would be different if HBO Max wasn’t so late to the game. It could have had an established streaming market by now, thus wielding pricing power to comfortably set a $14.99 subscription price.

Now, however, it must pitch itself as a premium service in an already crowded marketplace.

This brings up a final point: AT&T just handed Netflix the ability to raise its own prices. Analysts have long complained that, at $12.99 per month, Netflix didn’t have any more room to move prices higher in this extremely competitive market. AT&T just solved that problem.

By setting a $14.99 premium price on HBO Max, AT&T has given Netflix pricing wiggle room once again.

That said, Netflix will need that wiggle room to compete with the massive size of Time Warner’s content catalog.

All that remains to be seen is whether AT&T can manage HBO Max better than its other seven streaming services.

(Still no word on whether those are going away or not. Leave it to AT&T to keep it confusing.)

Advanced Micro Devices Inc. (Nasdaq: AMD) just reported its highest revenue in more than a decade. And yet, AMD is down roughly 2% today.

I smell an opportunity.

By the numbers, AMD reported earnings of $0.18 per share on revenue of $1.8 billion. For those keeping track at home, that’s a 38.5% rise in earnings and an 8.9% jump in revenue on a year-over-year basis. Both figures also bested Wall Street expectations, as AMD enjoyed “the first full quarter of 7nm Ryzen, Radeon and EPYC processor sales.”

So, why are AMD shares falling? Because the company put fourth-quarter guidance in line with analyst expectations. Apparently just meeting expectations is no longer enough for some investors. Neither is posting its eighth straight quarter of stealing market share from Intel Corp. (Nasdaq: INTC).

That sounds like a rather successful 2019 for the upstart chipmaker. Also, investors shouldn’t forget that game console processor sales are down right now, but new offerings from Microsoft Corp. (Nasdaq: MSFT) and Sony Corp. (NYSE: SNE) arrive next year.

The new PlayStation 5 is chock-full of AMD goodness, and you know those things are going to sell like hotcakes.

The beleaguered Dow component was expected to report a decline in earnings to $0.12 per share. Instead, GE said earnings rose to $0.15 per share, marking the first quarter-over-quarter gain in nearly two years.

And while revenue slipped fractionally to $23.36 billion, the results still topped expectations.

Guidance was also on point, with GE expecting full-year earnings of $0.55 to $0.65 per share, surrounding Wall Street’s target of $0.60 per share.

GE shares surged on the news, rallying more than 11% at last check. The rally is a crucial sentiment indicator for GE.

The shares are looking to finally claw their way out of single-digit territory, and a sustained move above $10 would be bullish for GE investors holding for the long term.

Mattel Inc. (Nasdaq: MAT) earned itself some hot wheels this morning. The company just blew away two of the biggest issues investors have been fretting over for months: a whistleblower investigation and Chinese tariffs.

The toy giant beat both Wall Street’s earnings and revenue targets, with sales rising 3.1% to $1.48 billion — the largest year-over-year gain since 2013.

But the real story was the resolution of the whistleblower allegation on improper financial reporting. To resolve the issue, Mattel will restate the last two quarters of earnings from 2017. However, the company said this will have no financial impact. Also, Chief Financial Officer Joe Euteneuer is leaving Mattel as a result. The accounting issues arose right after Euteneuer joined the company.

As for the issue of Chinese tariffs: “We didn’t see any impact from tariffs in the quarter, and we don’t expect any for the year,” said Mattel CEO Ynon Kreiz.

This was probably the biggest news for Mattel, especially after competitor Hasbro Inc. (Nasdaq: HAS) blamed its poor results on tariffs last week.

MAT shares have surged more than 14% on the news and are looking to establish a foothold above former resistance at $12. 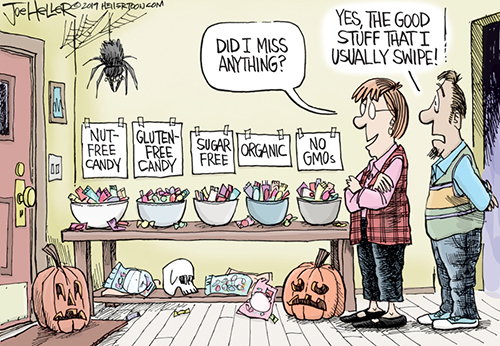 Luckily, I don’t have this problem in suburban Kentucky. I get to swipe all the good stuff: Kit Kats, Reese’s, 3 Musketeers … I’m gaining weight just thinking about it.

Are you geared up and ready for trick-or-treat tomorrow?

I’ll be handing out candy dressed like a “Trump tweet.” With the market near all-time highs and volatility near annual lows, I can’t think of too many things scarier than that.

How about you? What scares you in the market right now?

Drop me a line and let me know at GreatStuffToday@banyanhill.com.

Great Stuff Reader Feedback arrives tomorrow. Have you sent me anything this week?