Stocks are selling off. Is this the beginning of a bear market, or just a long overdue pullback?

Traders try to forecast market action with indicators. Some indicators are elaborate. Others are simple. Over time, the simple ones tend to be more useful.

This might be surprising. Many of us think Wall Street is using sophisticated tools to make money. It is.

As individuals, we can’t compete with its sophisticated techniques. That’s why day traders tend to lose money. Wall Street firms are trading in nanoseconds, and our data feeds can’t process information that quickly.

But big Wall Street firms also use simple tools to make money. Many long-term trend-following strategies use simple ideas. And we can use these same tools to ride big trends in the stock market. 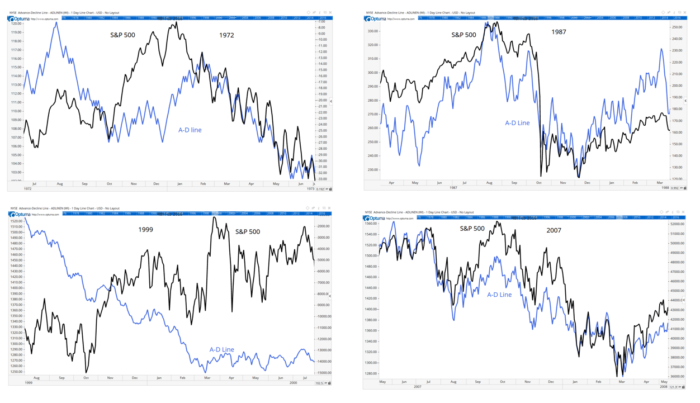 These four charts show the market action before significant declines. In each case, the A-D line (the blue line) was in a downtrend before the S&P 500 turned lower. This happened before bear markets that led to losses of 50% or more in 1972, 1999 and 2007. It also happened before the 1987 crash.

The A-D line simply counts how many stocks are going up. In a bull market, we expect most stocks to be going up. In a bear market, the majority of stocks should be going down. That is a simple idea, but, as the charts show, it’s an important indicator to follow.

Near market tops, we see fewer stocks going up. The index is moving up because just a few large stocks are producing gains.

In 2007, housing stocks and financials were still moving up after most stocks peaked.

In 1987, traders were buying just the largest stocks for a strategy called portfolio insurance. That insurance failed spectacularly in October.

Narrow buying always leads to a sell-off. That means we should watch the A-D line for an advance warning signal of the next bear market. The next chart shows the indicator right now. 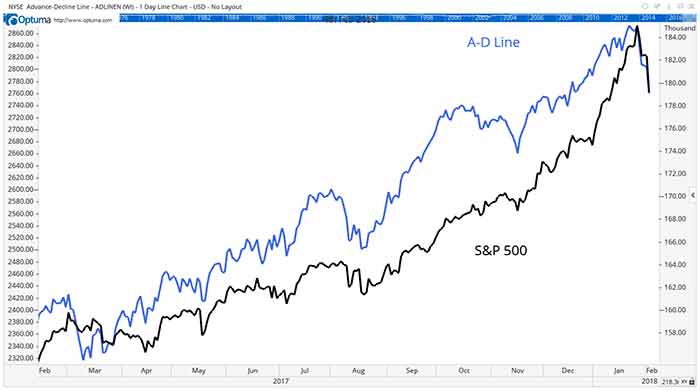 The S&P 500 and the Advance-Decline line are in synch. As long as they remain in synch, a bear market is unlikely. We might see a pullback, which is a decline of 5% to 10%. But that will be a chance to buy more stocks and prepare for the next upturn.