That’s significant. We haven’t seen an oil shock like this since the Iranian Revolution in the late 1970s.

This is a new level for oil, and it should hold oil prices up for a while.

I discussed this with my colleague Matt Badiali, editor of Real Wealth Strategist.

Saudi Aramco has since assessed the damages. Saudi Arabia’s energy minister said the company has restored about 50% of production that went offline.

It should be back to normal in a few weeks.

Here are three questions to ponder:

Question No. 1: What Prompted the Attack?

The drone strikes put a geopolitical risk premium back into the price of crude oil. In other words, is now be a lingering fear of more supply disruptions.

These attacks are the effect of a retaliation against increasing U.S. sanctions on Iranian oil exports at Saudi Arabia’s request.

Back on June 13, two oil tankers exploded in the Gulf of Oman. The U.S. claimed it was an unprovoked attack by Iran.

Now this turn of events has propped up prices in a way we haven’t seen in a long while.

And more conflict will push prices even higher.

But already, tensions are heating up.

Yemeni Houthi rebels took credit for the drone strikes, but Saudi Arabia is increasingly confident the attack originated in Iran.

The U.S. also blames Iran. As a result of the accusation, Iran’s Supreme Leader Ayatollah Ali Khamenei wants to avoid talking to America at all.

The market has been bearish on crude oil because of bloated supply and weak demand forecasts.

Traders will run back into the oil market on this news and push prices higher.

Question No. 2: Will Higher Oil Prices Drive Inflation Up?

Since the 1980s, the U.S. economy hasn’t entered a recession because of oil prices … unless the price rose more than 90%.

The price of West Texas Intermediate crude oil is up 23% year to date.

Consumers won’t be happy if it costs more to fill their gas tanks.

But set aside prices at the pump for a moment.

Rising oil prices cause producer prices to rise. Producers such as Exxon Mobil and Chevron pay more for petroleum-based inputs to make the goods they produce.

Oil prices and producer prices spiked in 2007. The rest is history… 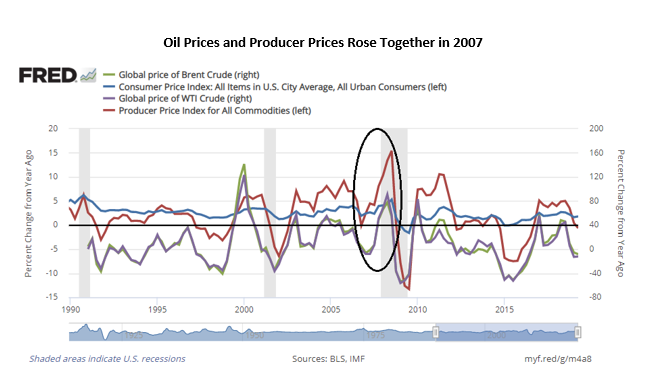 As you can see, the producer price index for all commodities started to rise in 2007, leading into the economic crisis of 2008.

We want to follow that correlation closely. It will tell of coming oil price inflation and its impact on the economy.

Question No. 3: Will the Federal Reserve Cut Rates After Saudi Drone Attack?

The Federal Reserve wraps up its latest monetary policy meeting this afternoon. And it’s not thinking about inflation from rising oil prices.

Still, traders were certain the Fed would cut interest rates by a quarter point. But not anymore.

As of yesterday, there was a 34% chance the Fed would do nothing.

Presumably, if the Fed does nothing, it’s because it wants to wait and see how oil and gas prices feed into the economy.

Inflation is not on the Fed’s radar.

Unfortunately, the Fed’s focus more closely resembles policymakers’ focus in the 1970s — rising oil prices had a larger impact on the economy than the decades that followed.

Since the Fed is distracted by slow growth, it’ll leave the economy exposed to rising oil prices.

Producers will feel the pressure first. Then consumers and investors. And we can capitalize on oil prices moving higher.

Higher Oil Prices: What You Can Do to Profit

Don’t shrug off the impact the Saudi drone strikes will continue to have on the markets.

The price of oil is up and probably going higher.

It’s not going to break the global economy by itself.

But global economic growth is fragile, and the system is vulnerable to a chain reaction of risk originating in the Middle East.

Sometimes markets go down more than the average investor can manage. Having a system that’s proven to generate gains during bull markets and bear markets is a great way to avoid unnecessary worry.

Last weekend, I told attendees at the Total Wealth Symposium how to make money even when the market is going down.

It’s with a strategy Matt Badiali and I developed.

It produces monster gains in as few as three weeks at a time. We just bagged a 320% gain on an oil trade after news of the attack this weekend.

Click here to learn more about how you can join us and make monster gains too. 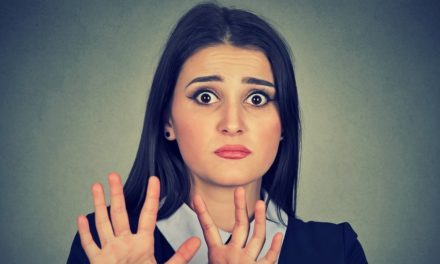