The presidential cycle — the four years a president is in office — is a seasonal trend that shows us what to expect in the stock market. The 2020 presidential election is no different.

Each presidential year has a unique set of characteristics that affect how the stock market reacts.

Next year, 2020, happens to be an election year. That’s why I want to focus on the fourth year of a president’s term in office.

Let’s go over what the election year means for the stock market, and what you can expect if a Democrat or a Republican wins the election.

I looked back to 1945 because our economy has been more stable since then. This seasonal trend gives us a better idea of how the market will react under current presidents.

You can watch my video below for more details on how presidential elections impact the stock market.

Now, during the fourth year of a president’s first term, the stock market experiences a general upward trend.

And come next year, we can expect a lot of the campaign rhetoric to pick up.

President Trump, for example, might tweet about his accomplishments so far … especially the performance in the stock market.

This will help give him some momentum heading into the new election.

With the promotion of this positive sentiment, it’ll help the year trend higher.

There’s only been one instance where the fourth year of a president’s first term resulted in a negative performance.

That was back in 1948. Since then, three years finished within 5%, and five years performed better than 10%.

Take a look at the seasonal trend on the chart below: 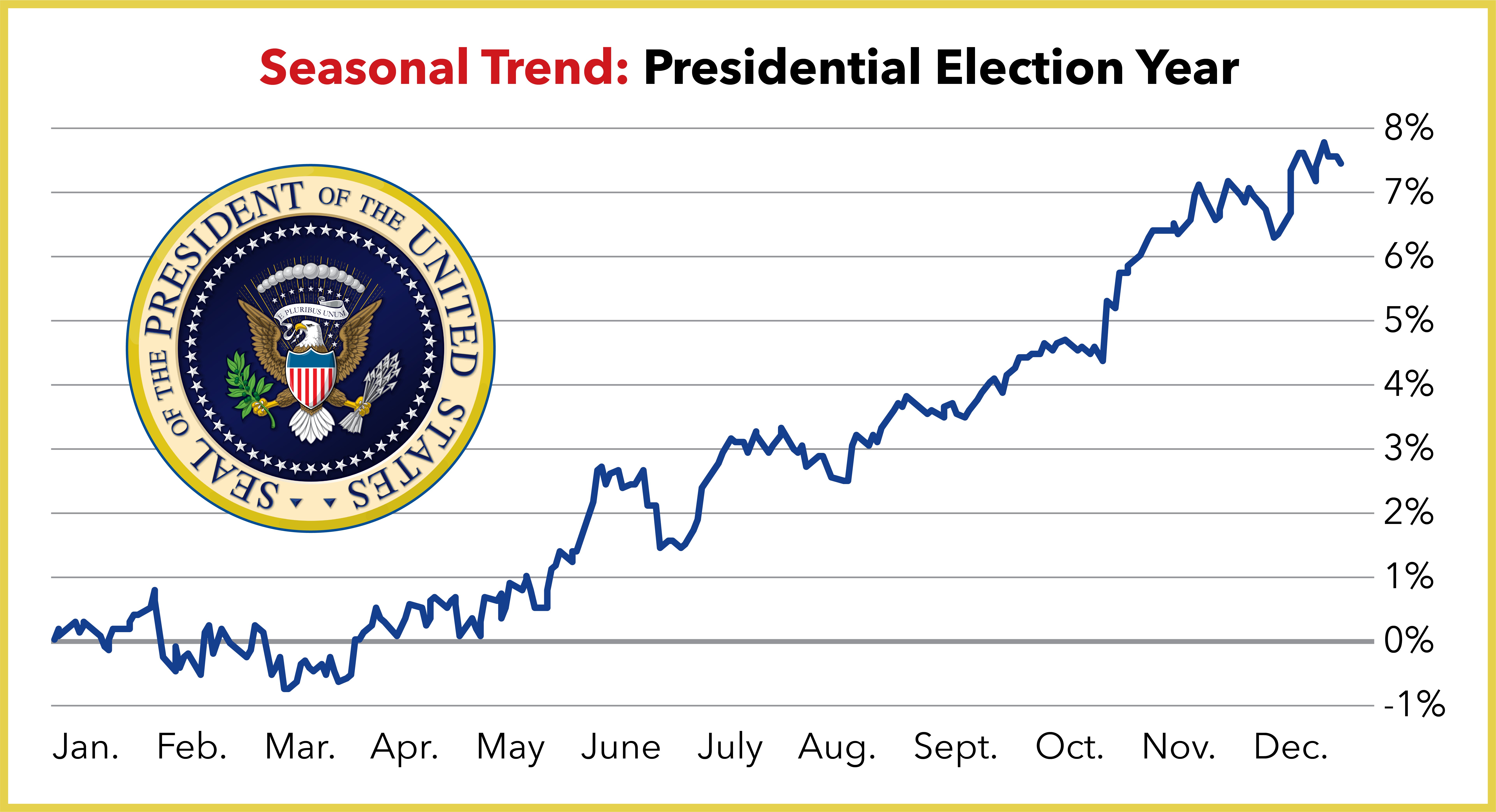 As you can see, we can expect a sluggish start to the year.

By May, the usual saying “sell in May and go away” won’t apply, because that’s when the rally will begin.

And there’s a strong surge after the election in November. We can expect to finish the year strong.

Again, this is an average of every president’s fourth year since 1945. So it’s the seasonal trend I’ll be looking for in 2020.

There’s another statistic I looked at, and I want to share it with you.

I’m sure a lot of you are wondering what happens when Republicans or Democrats win an election.

Here’s what I discovered…

Democrat or Republican: How the Stock Market Performs

To be honest, I don’t like making predictions based on who wins an election.

It’s all a bunch of fearmongering.

But there are some general trends worth looking at.

After a one-term presidency, the fourth year is generally positive. It doesn’t matter which party wins the election.

When we include presidents who are in their eighth year, however, the winning presidential party has an impact on the market.

Since 1945, when a Democrat takes over from a Republican president, the election year has averaged a 5% loss.

On the other hand, when a Republican takes over, there’s been a 9% return. This implies the markets are not worried when Republicans win an election.

The single event skewing the data was George W. Bush’s eighth year, which posted a 37% decline before Obama took over back in 2008.

There are two different ways you could see this:

Either way, your view may depend on your political affiliation.

The major takeaway is that Senator Elizabeth Warren, one of the Democratic presidential candidates for next year, may actually be bad for the stock market.

And if a Republican wins the election — even a second term for President Trump — the stock market rally is more likely to continue.

As we head into the 2020 election year, look for the political fireworks to take off — and don’t lose sight of the general trend the stock market follows.

The bottom line is, we can make money in either environment.

Stay tuned — I’ll continue to find the best opportunities for you as we move into the 2020 presidential election and the next decade.