2 Stocks to Buy as States Shut Down — Again 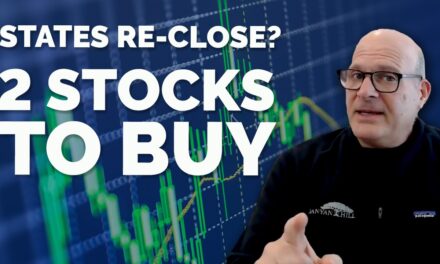 Editor’s note: States are shutting down again. This time, we may have a vaccine coming soon. But for now, the virus is still raging.

This was written back in July after large states like California were shutting down for the second time. Now, as the country enters another round of shelter-in-place directives, we wanted to bring it to you again.

Wall Street veteran Charles Mizrahi shows you why trying to trade around COVID-19 restrictions is a fools game. He shows you one of his favorite sectors instead. — Annie Stevenson, Managing Editor, American Investor Today

States started to reopen… But COVID-19 had other plans.

Many states are seeing cases rise at a rate that could “overwhelm” their health care systems.

Now, this doesn’t bode well for the economy.

But trading based on daily coronavirus news is a terrible strategy.

Watch my video below to find out why it’s a waste of time to focus on the next three to five weeks.

Instead, I suggest you look to invest in a trend that is still in the early stages.

I share two stocks to buy into the early innings of this trend.

Watch my video below for more:

So, since March 2020, stocks had been warring. There’s been a fantastic rally off the lows. By the way, folks, this is despite terrible earnings and revenue, and business getting kicked in the teeth. The market turned around and started to soar.

The reason is, traders turned very optimistic, especially when the Federal Reserve opened the fire hydrant. Money just poured out everywhere. It flooded the system with money — stimulus packages went out to folks, and unemployment insurance was extended and given $600 more. There was the Paycheck Protection Program, and there were federal loans from the Small Business Administration.

The government did its job. Really, the Fed did its job, opening up the spigots and letting out cash, and this way kept the system moving. But now, all that’s about to run out. What’s next?

The problem here is, after the flattening of the curve, COVID-19 is rising. It’s getting higher, especially in Florida, Texas and California. Some states that were open are now rolling back. They’re rolling back their openings, starting with restaurants, camps and a whole bunch of other places where people meet up. That’s not good.

Now, to be totally, 100% honest with you — I don’t have a clue. I really don’t know. Whatever I tell you is going to be a guess. Instead of guessing, I’m going to share with you two stocks that should do well once the world gets back to normal.

One Retail Sector Will Keep Thriving

Now, I want to focus on an industry that is really unloved and unwanted by Wall Street. I’m going to tell you what the industry is and why I like it. It’s going to be really key because it has two strong tailwinds pushing it forward. The first is, during difficult economic times, consumers spend at these places.

If you guessed off-price stores, you’re right. The off-price industry is a fantastic industry. You can get brand-name stuff at 30% to 40% off. There’s no reason to go anywhere else. In other words, why pay full price when you can get name brands at 40% off? I saw in the financial crisis of 2008 that other retailers were just sucking wind, yet off-price retailers were doing phenomenally well.

The second tailwind that I’m seeing here is the consumer shift from department stores and specialty stores. Billions of dollars are now up for grabs. They’re no longer spending it inside of malls. I see that money ending up in the off-price retailers. The latest thing I’ve seen is department stores have fallen 23% year over year in March. That was already off a terribly low base.

Off-price retailers stand to win because of pricing. Another thing most people don’t talk about is inventory selection. Manufacturers want to get rid of their goods. Specialty retail and department stores are not doing well, so they’re redirecting a lot of their stuff and sending it to off-price stores — which are paying cash on the barrel head, giving very favorable terms and getting big, big discounts.

Manufacturers want to get rid of inventory in huge amounts, and off-price retailers are there. That’s going to help their customer base because off-price retail is going to have greater bargains and greater discounts and destroy department stores and specialty shops, especially in malls. There’s a shift coming.

I’m going to give you two stocks in the off-price arena that I like a lot. I mentioned them several times in the past, but these are companies that, in the future, I see doing really well simply because they dominate their industry.

The thing there is the thrill of the bargain. It continues to bring shoppers in. The company thrives in the age of Amazon. Why? Because you can’t replicate the treasure hunt online. In fact, T.J. Maxx has a very small e-commerce presence. Treasure hunting in stores — we really have no way to replicate that.

These kinds of businesses, especially T.J. Maxx, do fantastically well in good times. What happens is in bad times, it does even better. Why? Because people need to stretch their dollars. TJX is a great company. The pricing is OK — not a screaming bargain, but still there. But what I want to share with you is what I heard in its latest earnings call in May.

The company talked about strong, early trends. That’s in the face of COVID-19. It has 1,100-plus stores that it reopened for at least a week, and it’s seeing sales pick up. That was about a month ago. I don’t have the data on how many stores are opening up now, but I think it’s more than 1,100. I’m almost certain that it’s more than 1,100. What it’s seeing here is that overall sales have been up above last year, across all states and countries where its stores are open.

This is key: Most of TJX’s stores are not in malls. They’re in outdoor shopping centers. Why is this a big thing? Because indoors is where people feel most susceptible to catching the coronavirus. Masks and being in a confined area are spooking a lot of people out. Mall traffic has plunged. Consumers would rather shop outdoors than the indoors of the mall.

As of May, TJX opened up around 1,600 stores, or about 35% of its 4,500 stores. It’s phasing in more and more, using the Centers for Disease Control and Prevention guidelines.

The stock traded as high as $65 or so in early February, then plunged to almost half of that, around $33, at the end of March. Today, it’s not cheap, but it’s trading at an attractive price. That’s my No. 1 thing.

Over the long term, it should do really, really well.

The second stock I want to share with you, also in the off-price retailing business, is Ross Stores Inc. (Nasdaq: ROST). Ross Stores is the largest off-price apparel and home fashion retailer in the U.S. It operates two brands: Ross Dress for Less and DD’s Discounts. DD’s are much smaller stores.

It’s famous for putting brands at discounted prices. The store environment — if you haven’t been into a Ross store, I highly suggest you do. I looked around and I just couldn’t believe it. People are just rifling through racks and looking everywhere for bargains. It really is a treasure hunt.

It has a wide, wide range of products, all at low prices. What it does is mark up these products much less than specialty stores do. That’s why it has goods flying out the doors.

The key thing about Ross Stores is it’s really focused on keeping operating costs as low as possible and increasing margins. In May, it opened around 700 of its 1,800 stores, so around 40%. It’s continuing to open up more.

The stock traded as high as $121 in early February and dropped to less than half of that, $56, at the end of March. Folks, you don’t always get great prices for great businesses. Sometimes you have to pay up a little. Ross Stores and TJX are two stores that over the long term should do really, really well.

So, just to sum up the key to making money, especially during times like this with the coronavirus and uncertainty, when we have no idea what’s going to be up from week to week or from day to day. In times of uncertainty, the trick is to find great businesses that are financially sound and trading at attractive prices. Then, sit on your butt and let the business take care of itself, and you make the money.

When the economy picks up, these businesses are going to do really well. Off-brand is in a position to do well. If the economy doesn’t pick up, where would you rather spend your $100 on clothing? At a full-price department store or for a lot more value at an off-price retailer? Pretty simple.

P.S. This year has been one of firsts … and extremes. There’s much to be positive and optimistic about for 2021, but we are still not over the hurdle.

While most investors freaked out, sold at the bottom in March and sat out of the bull market … we never wavered. We stayed the course and kept buying great businesses with strong tail winds and great CEOs at bargain prices. If you want more of my guidance, subscribe to my flagship newsletter Alpha Investor here. 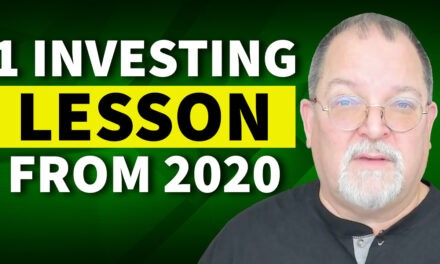 If Investors Learn One Thing From 2020, It Should Be This