The Ultimate Scarce Resource Will Deliver Profits for This ETF

I will remember 2021 for a lot of things, or maybe a lack of things. That’s because shortages are plaguing many industries on a global scale. Cars, computers, microwaves, houses … the list goes on. Part of the blame falls on efforts to create lean supply chains through corporate programs such as Just-in-Time manufacturing and offshoring. It seemed like a good idea. 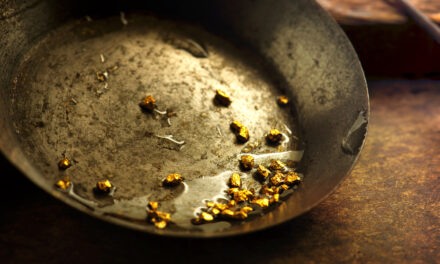 I will remember 2021 for a lot of things, or maybe a lack of things.

That’s because shortages are plaguing many industries on a global scale.

Part of the blame falls on efforts to create lean supply chains through corporate programs such as Just-in-Time manufacturing and offshoring.

It seemed like a good idea. After all, less inventories and lower working capital means fatter profit margins and more cash flow.

But the pandemic blew that concept apart, showing us that a shock to the system could disrupt everything.

No one stockpiled critical components.

Global trade routes are struggling with port congestion and a lack of containers to move goods.

Many industries are fighting hard to catch up.

Plus, now there’s a shortage of something else that’s exacerbating the situation … and could become much worse.

No, I’m not talking about the ongoing chip shortage. Instead, we have a labor shortfall.

Companies across the U.S. are struggling to fill open positions, which means labor is proving to be the ultimate scarce commodity.

Just look at the chart of job openings below. See how the number has surged to over 9 million openings? That’s clearly the highest level since tracking began.

Meanwhile, the labor force participation rate remains well below pre-pandemic levels. It sits at just 61.6% compared to 63.4% before the pandemic. That’s among the lowest levels in over 40 years. It means workers have not been reentering the workforce despite the recovery.

But there are several reasons why things could become much worse.

In other words, the labor shortage isn’t about to be resolved anytime soon, and that’s creating a windfall for one industry in particular.

How to Play a Boom in Automation

Persistent labor shortages will accelerate the deployment of automation and robotics across numerous industries, such as retail, factory and warehouse applications.

Today, it’s a $183 billion industry projected to grow by 62% in six years to reach nearly $300 billion. And those estimates were before 2021’s labor shortages emerged.

That’s why you should pick up shares in the Robo Global Robotics & Automation ETF (NYSE: ROBO) to profit.

Following a strong rally in late 2020, this exchange-traded fund (ETF) has traded in a consolidation since February, as you can see below. 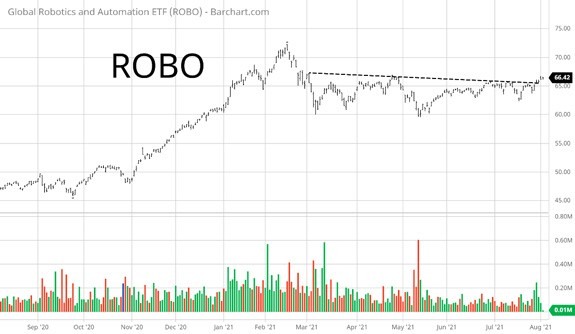 ROBO is now showing signs of emerging from that basing period with the break of the dashed trendline. Now it’s set to target prior highs.

But with growing tailwinds in place that I’ve outlined here, I expect ROBO to do so much more. It could well break out to new all-time highs.

So get in now before the big move! And if you want to learn how to magnify your gains on plays like this using options, then you can see how I do it here. 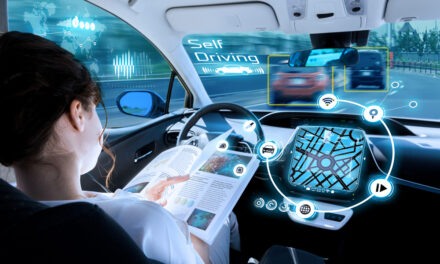 Get in Now: The $7 Trillion Opportunity Making Our Roads Safer