The “Too Big to Fail” Concept – Are U.S. Banks Over leveraged?

Ten years ago, the largest bankruptcy filing in U.S. history was one day away from being filed.

The tagline from the 2008 crisis that was set off with this now-famous bankruptcy was “too big to fail.”

Lehman Brothers, a 158-year-old financial institution with $600 billion in assets, evidently was not too big to fail.

With disregard to the issue of moral hazard, the government began buying up risky, nonperforming debt, like mortgages, auto loans and college loans, from various lending institutions

Lehman was just the largest casualty of the toxic debt crisis.

But the “too big to fail” concept, where America has to bail out an overleveraged Wall Street, is supposed to be a distant memory thanks to regulations.

That’s just not the case… 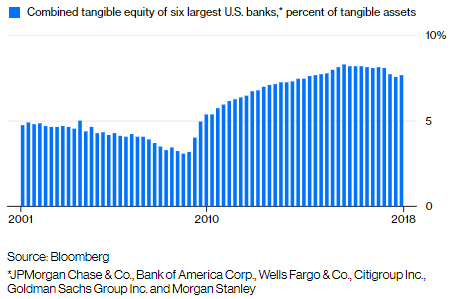 While the capital ratio, pictured above, has improved some, it’s starting to head in the other direction.

This is basically the amount of cash the banks are holding on their balance sheet. For example, if they kept $20 at the bank and lent out $100, it would be 20%.

Right before the global recession, that was at just 3%.

So we have come a long way, but steps taken recently are seeking to go in the other direction.

European banks avoided increased capital ratios. And in the U.S., President Donald Trump is starting to roll back some of the pieces to 2010’s Dodd-Frank bill, which added rules to protect consumers, and create a warning system for financial issues.

The Most Important Economic Data You’ve Never Heard Of: R-Star

The 2008 Financial Crisis Taught Us This Valuable Lesson