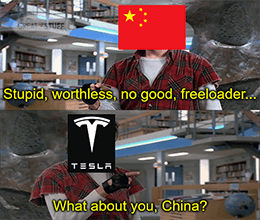 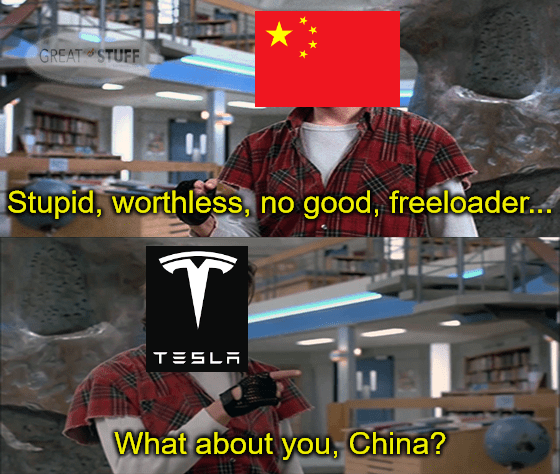 No, I haven’t upset Mrs. Great Stuff by buying too much bourbon again, Great Ones. Those harsh words came from the Chinese media this week. And they were directed at Tesla (Nasdaq: TSLA).

It was one of the harshest Chinese rebukes yet of the American electric vehicle (EV) maker, as Tesla deals with a growing public relations nightmare in its second-biggest market. Reports of failing brakes, battery fires and the like have gone viral on Chinese social media, culminating in a public display at Monday’s Shanghai auto show.

At the show, a woman claiming to be a Tesla owner stood on top of a car with a shirt proclaiming: “Brakes Don’t Work.” The woman said she was protesting a brake failure in her Tesla EV, which Tesla has largely ignored.

According to Tesla, the woman’s February collision was a result of a “speeding violation” and not a failure of her Tesla vehicle. In a post on Chinese social media website Weibo, Tesla said it would not cave to the woman’s “unreasonable demands.”

Now, I don’t know if you know how this kinda thing works in Chinese and Asian cultures … but the one thing you simply do not do is publicly rebuke someone else — especially heads of state or your customers. Say whatever you want during private negotiations, but in public? Play nice.

Regardless of the veracity of the woman’s claims, Tesla dun goofed. And it’s adding to the anti-Tesla sentiment in China, which spawned a harshly critical Tesla article in the state-backed Global Times:

The arrogant and overbearing stance the company exhibited in front of the public is repugnant and unacceptable, which could inflict serious damage on its reputation and customer base in the Chinese market.

There’s a two-pronged offensive against Tesla in China right now. The first is Chinese regulatory attention, as noted above. The second is public opinion … like the recent op-ed in Liaowang, a Chinese state-run news magazine.

Letting Tesla into China was certainly in the country’s best interest. However, letting it completely dominate the EV market is not. With the rise of domestic EV makers like Nio (NYSE: NIO), Xpeng Motors (NYSE: XPEV) and others, it was only a matter of time before Tesla’s dominance waned one way or another.

While the Chinese government isn’t directly or publicly attacking Tesla here, it certainly isn’t silencing critics. In fact, given the statement in Chinese-backed media, it appears to be privately encouraging consumers to speak up and denounce Tesla.

Tesla needs to tread very carefully here and seriously beef up its customer relations efforts if it doesn’t want to become an also-ran EV maker in China. Since China is Tesla’s second-biggest market outside of the U.S., this is serious business.

Tesla bulls beware: This isn’t the last time you’ll hear about Tesla’s fight to stay relevant in the Chinese EV market. But it turns out, Tesla’s stateside competition is just as fierce. 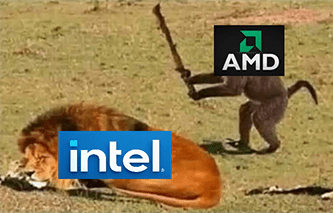 All right, Great Ones. Pop quiz: A company reports a beat-and-raise quarter, but its stock falls because the company is spending on growth.

Intel even said that full-year revenue, earnings and gross margins would come in ahead of analysts’ targets. (Click here for the full numbers.)

There’s the beat and raise. But what about spending? Well, as we all know, Intel is dropping $20 billion on two new chip factories in Arizona to correct its manufacturing issues. Intel gave a nod to this spending spree in its post-earnings conference call, highlighting lower gross margin percentages in the second half to construction costs and increased research and development.

These are good expenditures for a company. Furthermore, Intel is in a fight with AMD for market share, and that $20 billion in growth spending is proof that the company is taking this fight seriously.

So, Great Ones, if you bought into INTC when Great Stuff Picks recommended it on December 30 — keep holding. Great returns are on the way. And if you didn’t buy in initially (shame on you), now is your chance to get in on this rally. 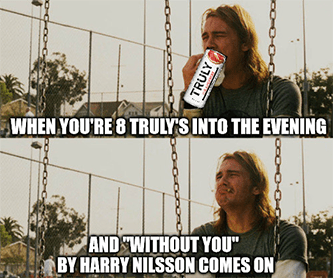 Sorry, Founding Fathers … Sam Adams is out. Seltzer water is in.

Earnings came in at $5.26 per share, more than doubling Wall Street’s target of $2.61 per share. Revenue skyrocketed 65% to $545.1 million, also destroying estimates.

But it wasn’t Sam Adams’ delicious amber waves of grain-fermented beer that drove revenue. It was alcoholic water.

Truly has been a game-breaker for Boston Beer at a time when consumers have largely abandoned craft beer offerings. In fact, Truly now commands more than 28% market share.

Personally? I’d rather drink vodka than alcoholic seltzer water. And that’s saying something coming from a bourbon fan. But, we’re talking about investing … not my odd (yet refined) personal preferences.

Either way, you can’t go wrong with SAM … even if you drink flavored alcoholic sparkling water. Ewww.

No. 3: The SNAP That Smiles Back 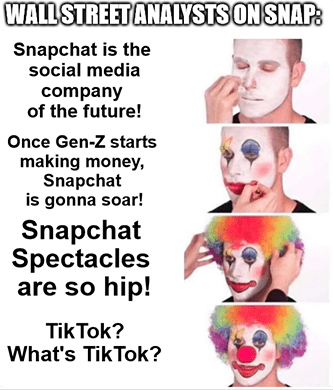 OK, I wasn’t quite done ranting about Truly awful drinks yet: Name a better duo than watery mass-market booze and irritating Snapchat stories, I’ll wait. Don’t you dare take that pic without my can semi-raised in a goofy fashion!

Snap (NYSE: SNAP) earnings were as flat as day-old diluted seltzer. The Snapchat parent ended the quarter at a breakeven, while analysts expected a $0.06 per-share loss. Revenue, on the other hand, reached $770 million and topped estimates for $743.8 million.

In SNAP land, this is high success. Wall Street was impressed enough by the results, and SNAP crackled and popped up 9%.

I, on the other hand, have reservations — partly because, to this day, I still do not understand Snap’s social media model. Sure, just like with Netflix (Nasdaq: NFLX), it’s never really about the earnings misses and revenue swishes anyway — subscriber growth is the company’s Snapchattin’ lifeblood.

But I’ve always banked on the idea that younger generations like Snapchat and use it over Facebook. That’s about it.

Snap’s had ho-hum luck monetizing those users all its life. And I can’t be the only analyst who expected Snap to fare better once Millennials and Gen Z started making money. That doesn’t seem to be happening, judging by the fact that Snap’s still not generating any substantial earnings.

Now, Gen Z is moving to other mediums like TikTok, Twitter and Discord. This leaves SNAP in a really weird place.

Sure, Snapchat was bound to eke out more growth amid lockdown — a 22% jump in daily active users isn’t all that shocking, all things considered. But that doesn’t mean Bo Diddly-squat if you can’t monetize those users. Who mines its users’ wallets and data better than Twitter or Instagram?

And it doesn’t help that TikTok and Insta have taken most of Snap’s selling points for their own apps (think picture stories and quick-video messages). Yet, Snap somehow expects revenue will jump 80% to 85% in the second quarter. I just want to know … how? 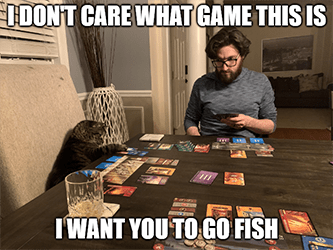 Going off last quarter’s reports, there’s almost more money in Snapchat’s revenue mystery meat than in Hot Wheels, and my inner four-year-old is gravely disappointed, let me tell you.

Mattel (Nasdaq: MAT), the toy and gamemaking master, had an outstanding quarter but still couldn’t quite turn a profit. The company lost $0.10 per share, which is still better than the $0.35 per-share loss analysts expected.

In the pandemic’s stay-at-home climate, this toy aisle totalitarian went hog wild in the family search for entertainment. Toys, board games, card games and a whole lotta Mandalorian plushies — you name it, and Mattel gobbled up the stimulus check cash with glee.

While revenue’s up 47% year over year, this, unfortunately, is Mattel at the best of times. The worst of times for MAT investors is to come.

Lemme guess: You’re about to be a Debby Downer again?

‘Tis what I do best! Mattel is kinda the antithesis to Sam Adams up there — it’s set for a slowdown regardless of the economic reopening. As more people try out that new “going outside” thing, the lockdown boom on board games and at-home entertainment dies. I’m sure even you board game junkies out there are itching to go do something else by now.

Toys and licensed products will always be the main game for Mattel, and it can count on a little sales bump from movie tie-in toys as film releases get back on track. But that’ll be nowhere near the pandemic boom where we all went through every card game in the deck.

Mattel’s banking this stimulus-induced toy-buying spree … for now. If economic trouble waltzes along, however, discretionary spending will tank hard. And sorry, another Uno deck is not making the budget cut, Mattel.

Great Ones, Game On!

You made it! It’s with great honor that I welcome you to the weekend — but don’t think our ramble ends here. Why don’t you spill the beans on what you’ve been reading this week and drop us a line?

Do you think Tesla’s days in China are numbered? What should Musk and co. do to get back in the Chinese consumer’s good graces? Do you have strong opinions on “hard” seltzer — for or against? And what’s the deal with Snapchat? Any of y’all use that thing?

Send me a quick (or long) message right here, right now! We’d love to hear from you. 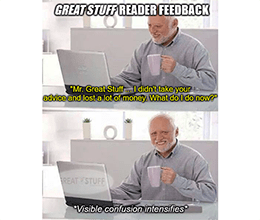 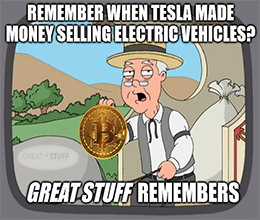