Home » American Investor Today » How to Profit From TSLA’s 13% Decline With Put Options: John’s Chart of the Week 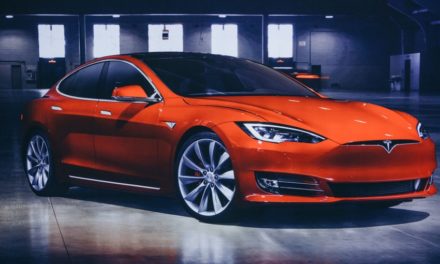 Short sellers borrow a stock, then sell it as a bet that its price will fall. To close the trade, they buy the stock back at a lower price, pay back their borrowed shares and earn a profit over what they paid to borrow.

Unless the trade goes the wrong way … as it did for TSLA short sellers last month when the stock rose 16.5% in one day.

The massive loss happened October 24 when the stock surged, and the timing of this lesson couldn’t be better.

Short sellers have been very wrong about the direction of TSLA’s price for the last six weeks. Yet now is their chance to get revenge.

The following chart of TSLA shows me why: 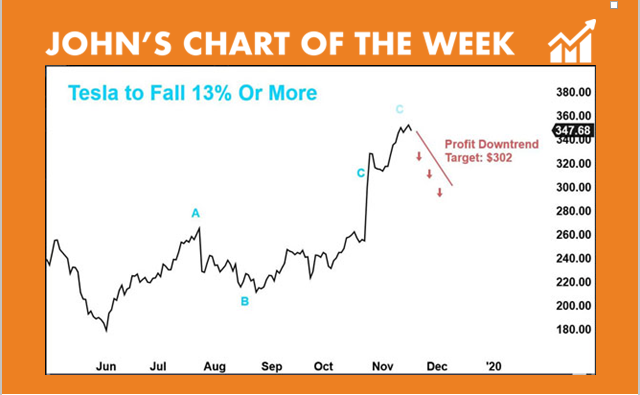 As you can see, TSLA’s surge is topping out at a likely price level near $347. And it’s due for a decline that could make you a lot of money.

It’s not easy to predict the direction of a stock’s price. That’s why it’s important to have a proven system to work with.

See, short sellers borrow shares to take a position on a stock — the same way buyers do, but they go the opposite direction.

This approach leaves them more exposed to massive, unexpected moves in the market and more vulnerable to big losses. Which is what happened with Tesla’s one-day price jump.

I’ve got a better way for you to profit from TSLA than selling short on the stock. For instance, a 13% decline in TSLA by mid-January can produce a 103% gain with a put option.

Or, if the move unfolds by mid-December, aggressive traders could use a different put option to make 188%!

TSLA is up 97% since its bottom in June.

The rally that started this uptrend provided the basis for what short sellers should have been watching out for.

You can see the initial rally, labeled A in the chart.

Once investors took profits, the stock fell — labeled B.

And I labeled TSLA’s overall move higher as C.

This A-B-C trend — like the one in the chart above — is the result of the predictable behavior of traders.

These trends are among the Apex Movement Patterns, or AMPs, I use to determine high-probability trade setups, entry points and profit targets.

This AMP predicted the one-day move that slammed Tesla short sellers. And it offered a clue about how much higher the stock could climb after that.

But the surge has reached a logical top.

When it’s time to buy or sell, all I care about is how investors and traders in the stock are acting.

Right now, as my above analysis shows, behavior argues for a short-term decline in TSLA within six weeks.

And listen up — you don’t have to sell it short to capitalize on the expected move.

You might even own shares of TSLA — you don’t have to sell your shares either.

Whether you own TSLA or not, there’s a way to position for a decline without using the stock directly. And better yet, without taking on the risk short sellers did when they lost a total of $1.4 billion in one day.

Instead, to bet against a stock, I recommend put options.

You see, a put option’s value goes up when the value of the underlying stock goes down.

Plus, you can place an options trade that exposes you to the stock for a fraction of the price of buying the stock.

And your potential loss is limited to only the amount of money you paid for the trade.

This keeps your risk in check, unlike if you borrow and short Tesla’s shares before they skyrocket 16% in a day — which happened last month.

If you want to make money when a stock falls, I urge you to check out Apex Profit Alert.

It’s a research service Matt Badiali and I created to magnify gain opportunities on shorter-term trends in stocks. And it’s given our subscribers a chance to earn double- and triple-digit gains all year.

Click here to see how you can subscribe to our service, increase your gains — and make the most of your money. 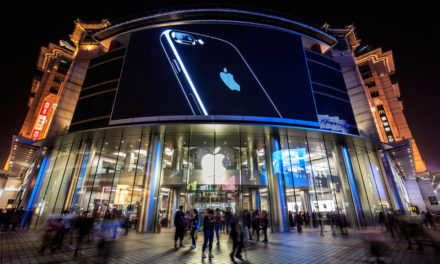