Home » Technology » Tesla Could Become the World’s Most Profitable Company

Tesla Could Become the World’s Most Profitable Company 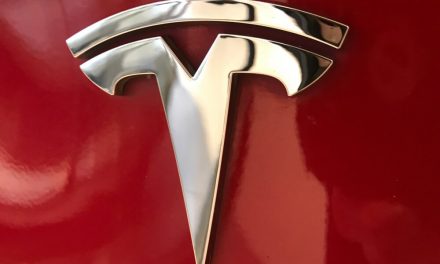 On Monday, I watched the livestream of Tesla’s “Autonomy Day.”

In this much-anticipated event, CEO Elon Musk unveiled the “best chip in the world” for self-driving cars and explained how the company uses neural nets to teach its cars how to drive themselves.

Both of these announcements were overshadowed by Musk’s outlandish prediction that Tesla Inc. (Nasdaq: TSLA) would field “1 million autonomous robo-taxis” by next year.

But this isn’t the first time Musk made a ludicrous pronouncement that didn’t come to fruition.

He’s got a track record of making grandiose promises that either took longer than expected or didn’t pan out.

And in January 2017, he said fully self-driving cars were “three to six months” away.

It’s no wonder investors take his proclamations with a grain of salt. He has become the boy who cried wolf.

For his latest proclamation, CNBC’s Jim Cramer called him a modern-day P.T. Barnum.

However, when you take a look into Tesla’s long-term plan, it’s possible that this could be the most valuable company in the world in 10 years.

The Battle Lines Are Drawn

The future price of Tesla’s stock is a binary outcome.

A decade from now, the stock could be 50 times where it is now. Or $0, with the current fleet of Teslas becoming discontinued collector’s items like DeLoreans and Jeep Grand Wagoneer “Woodies.”

On one hand, Wall Street analysts at Ark Invest have a $4,000 price target on the stock.  On the other hand, the bears say Tesla is the next Enron.

Tax credits for electric vehicles are fading away, and the bears argue that demand has peaked.

In March, Tesla paid off a $920 million bond, taking a big chunk out of the $3.7 billion in cash it had on hand at the start of the year. That was on top of a $230 million payment the company made in November.

Analysts argue it will likely need to raise another $3 billion of capital in the near term to sustain its capital expenditures and debt needs, given the company’s current burn rate of nearly $10 million per day.

This is the main reason why shares are 32% off their December highs. 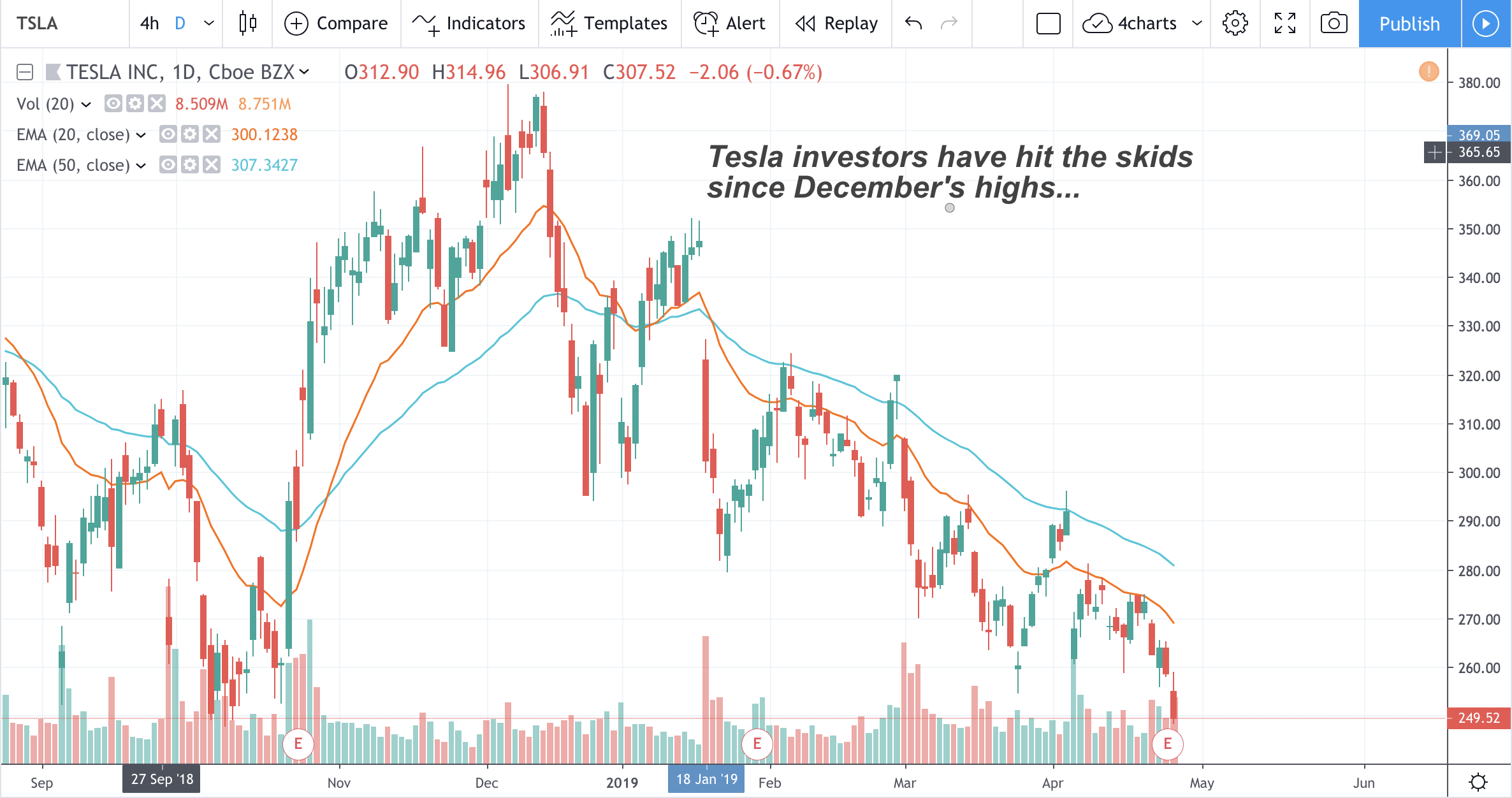 As I said earlier, the uncertainty surrounding Tesla’s future is a binary outcome, similar to the all-or-nothing event that early-stage biotech companies face.

In those instances, the drug either gets Food and Drug Administration approval and the stock skyrockets, or it doesn’t and the stock drops 90%.

That’s how you should think about Tesla. If it’s first to market with a fully self-driving car, the stock should skyrocket.

Because that would mean Tesla is becoming a platform business, not a car company.

A Platform Business for Transportation

In a research service I’ll be launching next month, the model portfolio will look to invest directly or indirectly in platform business models.

These are companies that facilitate interactions between a large number of participants.  By creating and owning this platform, the company gets to take a piece out of every transaction that occurs.

Amazon is a platform business for e-commerce.

Airbnb is a platform business for lodging.

Uber is a platform business for transportation.

Currently, Tesla is a car company. But its goal is to be a platform business for transportation that also sells cars.

It’s why Uber commands a $100 billion private market valuation. It’s why Lyft is worth $16 billion.

With a fully autonomous vehicle, Tesla would not only compete in this market — it would dominate it.

This is a winner-take-all market, and whoever provides the cheapest point-to-point transportation will win the race.

When you take an Uber or a Lyft, most of the revenue goes back to the driver. Almost $40 billion of Uber’s $50 billion in gross revenue flows through to the driver.

When, not if, full autonomy arrives, the cost of having a self-driving taxi shuttle you to and fro falls dramatically. Dropping the cost boosts demand and changes the economics of car ownership.

In the chart below, you can see how the cost per mile of transportation falls off a cliff with the introduction of the self-driving taxi: 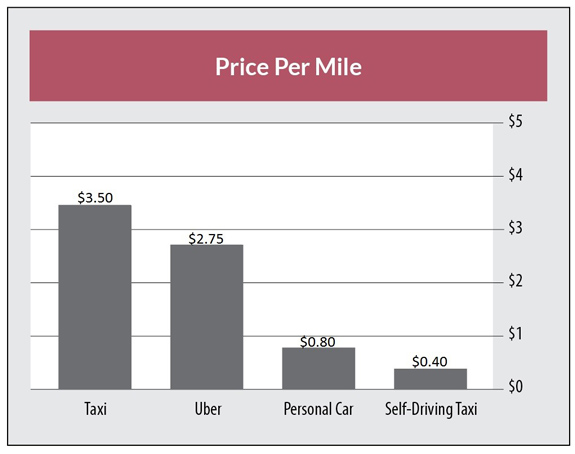 Elon Musk went even further than my estimates, claiming the cost per mile would be $0.18.

That would undercut the average price per mile of Uber by 93%, and force all ride-hailing companies into an existential crisis.

He’s also put a plan into action to develop this fleet of self-driving taxis.

A few weeks ago, Tesla announced a competitive leasing program. However, the one condition was that the lessee would not be able to purchase the vehicle when the lease is due.

Those cars would serve as the self-driving fleet.

This gives Tesla an enormous head start against Uber and Lyft, who haven’t even started manufacturing vehicles.

We all know that a car is the worst investment you can make.

When you drive a new car off the lot, it automatically depreciates by 20%. It sits parked for 95% of its life.

Musk claims that owners could profit $30,000 a year from their self-driving Tesla taxi.  And a decade from now, Tesla could own a fleet of 10 million self-driving taxis.

In getting to that point, Tesla will face stiff competition from both the auto industry and tech companies. Google’s Waymo project already has self-driving taxis in Arizona, and it recently announced plans for a factory in Detroit.

The race is not to build the platform, it’s to develop and release a fleet of self-driving cars. Ride-hailing passengers will migrate to the platform that offers a 93% discount to current market rates.

With 250,000 Model 3s on the road already, Tesla has an enormous head start in a winner-take-all market.

The company also has the advantage of a rabid fan base.

Investors and fans revere Musk as the chosen one and willingly put millions of dollars of deposits down on cars that won’t be built for three years.

In that sense, Tesla is a cult.

Musician Frank Zappa once said: “The only difference between a religion and a cult is the amount of real estate they own.”

In 10 years, Tesla might be the religion of transportation.

But it has to raise some short-term capital now to get there.