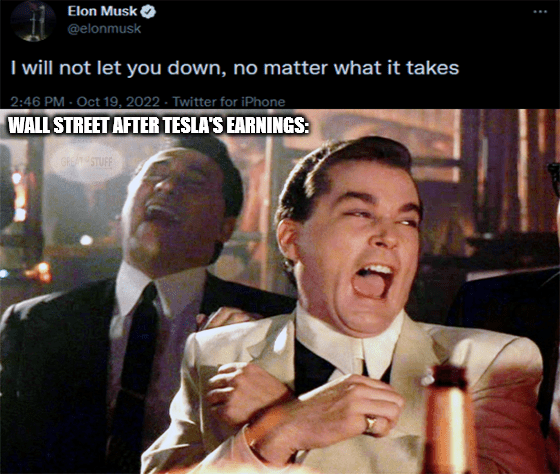 Great Ones, we’re no strangers to earnings. You know the rules, and so do I. Tesla (Nasdaq: TSLA) deliveries are what I’m thinking of.

Are we being Rick-rolled?

You wouldn’t get this from any other guy.

I just wanna tell you how I’m feeling. Gotta make you understand.

Dear God, please end the song and help us understand this insanity!

Have you not seen the Elon Musk tweet about Tesla earnings?

Here, have a Snickers and check this out:

Yup, and it hit just before Tesla released its Q3 earnings report … which, ironically, was a very big letdown. Thanks, Elon.

Additionally, Tesla said operating profit was $3.7 billion, well shy of Wall Street’s target for $3.9 billion. And … gross profit margins were 26.7%, down big from Q2 margins of 30%.

But that wasn’t even the worst of it…

As we look ahead, our plans show that we’re on track for the 50% annual growth in production this year, although we are tracking supply chain risks which are beyond our control.

But hold up a second. See that “on track for the 50% annual growth” part of the quote? Now check out the very next statement Kirkhorn issued:

On the delivery side, we do expect to be just under 50% growth due to an increase in the cars in transit at the end of the year, as noted, just above.

Tesla is trying to say that it both will and won’t hit its 50% annual growth target. So … it’s like Schrödinger’s growth? We won’t know until we look at it … or something. There’s a reason I’m not an experimental physicist, y’all.

The point is, the admission that Tesla might not hit its 50% annual growth plans — plans that Wall Street had already baked into TSLA stock price — went over like a lead balloon.

Every analyst and their mother is now concerned that Tesla is having production growth issues … especially Bernstein’s Toni Sacconaghi:

Aside from the financials, the earnings call didn’t sit well with us. Answers to many questions on the earnings call were curt and almost dismissive, with CEO Musk instead repeatedly making very bold prognostications about Tesla’s future and capabilities. 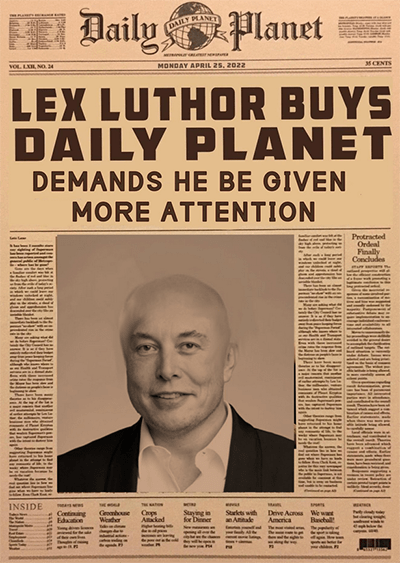 Toni, meet Elon — he’s always been like this. It’s just that now things aren’t all that hot at Tesla, so Musk is more than a little testy.

That said, Bernstein’s Toni already has an underperform rating on TSLA stock with a $150 price target. Ouch.

Elsewhere, RBC Capital Markets cut its target from $340 to $325 following Tesla’s earnings, while analysts at Mizuho slashed TSLA from $370 to $330.

On a final note, Elon Musk did talk about a potential TSLA stock buyback plan:

We’ve debated the buyback idea extensively at the board level. The board generally thinks that it makes sense to do a buyback. But we want to work through the right process.

I’m pretty sure Tesla’s board is more than a little worried how that one is gonna turn out, considering that Musk might need to sell billions of dollars more in TSLA stock to complete the acquisition. Just saying…

Well, Great Ones, we’ve known each other for so long. Your portfolio’s breaking, but you’re too shy to say it (say it).

Besides, we both know what’s been going on (going on). We know the game, and we’re gonna play it…

Sound familiar? It should: Ian King and Amber Lancaster just gave you the skinny on it all yesterday. If you missed that exclusive invitation — the nerve! — don’t worry, we’ve got you covered with the recap.

During the worst 19-month stretch of the 2008 financial crisis, he turned $350,000 into over $6 million. Ian will pull back the curtain on his best strategy for generating a bear market fortune.

And thankfully, we don’t have to hear any more of AT&T’s (NYSE: T) dithering game of “should I stay in the streaming market or should I go?”

What a coincidence, then, that AT&T should go on to post a brilliant, double-beat report today … the stock’s best post-earnings rally since 1997. All told, the company brought in $30 billion, up substantially from $29.1 billion a year ago, if you account for the businesses that AT&T divested.

It’s almost like we’ve been waiting for AT&T to get its act together for, well, years now.

Remember that time when Great Stuff noted that the only part of AT&T that’s growing is its wireless division? Yeah, someone finally got the hint and capitalized on this: AT&T saw 708,000 new post-paid phone subscribers last quarter, and the company is targeting 4.5% to 5% mobility growth for the full year.

But what about, uhh, recessionary market conditions? Inflation?!

AT&T finally woke up and realized that, while people might cut out a streaming service or two from their budgets to save cash … they’re not gonna give up their phones and internet, their only lifeline to the outside world.

You could just … go outside.

Don’t bring logic into this, we’re talking about AT&T. I’m more surprised that the folks at AT&T finally realized they can only focus on one business at a time … as if it should’ve never been in the streaming space in the first place. 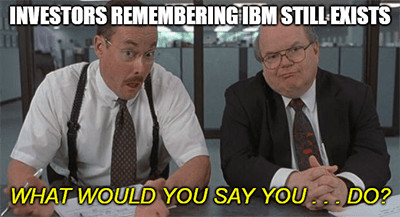 What is this, March of the Blue Chips?!

But doesn’t it make you feel better! Blue chips have won tonight. They can all sleep soundly. And everything is alright!

Even consulting revenue was up 5%, or 16% in constant currency.

What’s all this “constant currency” nonsense?

What, you thought IBM got that “International” in its name just to play with only one currency? Oh, nay nay. Combine foreign currency fluctuations and the usual ol’ inflationary pressures and huzzah, you have investors trying to juggle various percentages in an attempt to find some sort of constant consistency. Which is kinda hard to do with the ol’ greenback going gangbusters. But anyway…

Back at the ranch, IBM is laying on its best Sinatra impression, with CEO Arvind Krishna crooning: “It was a very good quarter.” And we’ll leave it at that.

I Am Become Dick’s, The Destroyer Of Pessimism 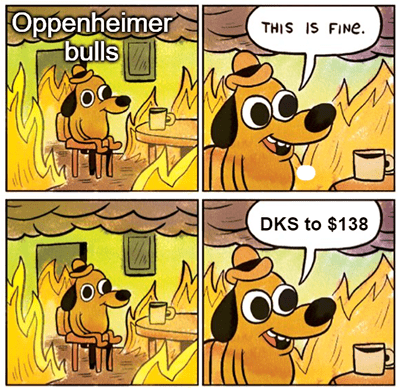 Hold up. Bullishness? In my Thursday Throwdown?!

Nagel raised his Dick’s rating from perform to outperform, with a price target of $138 on the stock. That’d be about 26% higher than today’s price for DKS.

Now, let me get this straight… Oppenheimer watched the market’s recent breakneck rallies … watched DKS shares rally a whole 53% off their previous May lows … and it’s gonna call THIS peak pessimism? Really?

You got a bad storm comin’, Oppenheimer. That’s the secret about gauging peak pessimism: There’s always room for more pessimism.

Especially if you’re banking on, oh, I don’t know, a retailer in a recession. 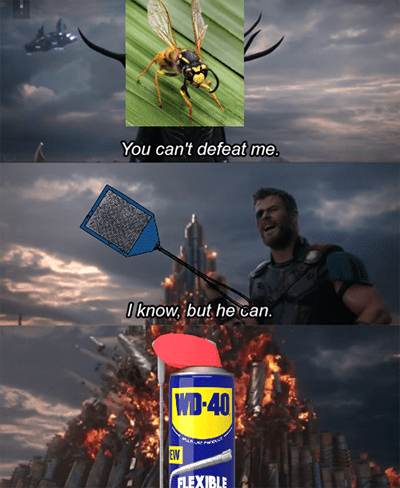 That’s it. That’s the joke.

Don’t you go anywhere, there’s more to the WD-40 (Nasdaq: WDFC) story to let it slip away so soon.

The WD-40 company just reported a 13% uptick in revenue for last quarter, and it even forecast revenue to grow 5% to 10% for the full fiscal year. Full-year sales are supposed to reach $545 million to $570 million — and that’s a whole lot of WD-40, my Great Ones.

Well, Mr. Schadenfreude, just look at gross margins. Much to my dismay, inflation seems to be one of the few things that WD-40 can’t loosen up. According to WD-40’s top brass, CEO Steve Brass:

Unfortunately, gross margin was the Achilles heel of fiscal year 2022. The current inflationary environment has severely disrupted our ability to achieve our 55 percent gross margin target over the near-term.

Those are some nice margins you got there. It’d be a shame if something were to … happen … to them.

Still, even at 47.4% for the quarter, those margins ain’t bad at all. It could be far worse. You could be Tesla.

And so, WDFC shares slid 11%, like a lubed-up aluminum can on a greased-up conveyer belt (and that’s probably where our metaphor needs to end).

Remember, if you ever have a stock or investing idea you’d like to see Great Stuff cover, let us know at: GreatStuffToday@BanyanHill.com. We’ve got a rip-roaring edition of Reader Feedback planned for tomorrow, and there’s one teeny little spot to squeeze you onto the bill.

But we can’t reply to your email if you haven’t sent it yet, now can we? So go on! Get to ranting and raving. 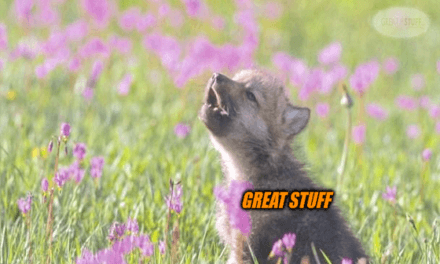