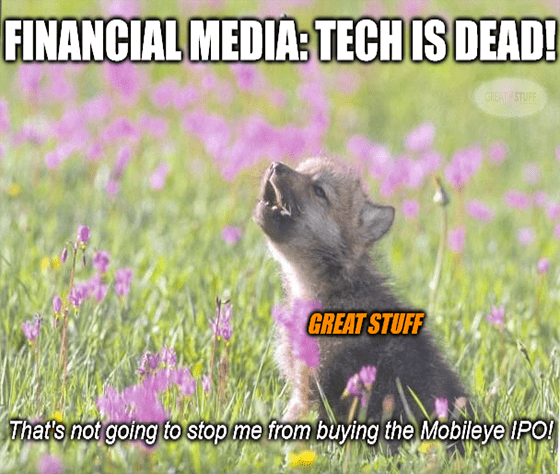 I Spy With My Mobileye…

Great Ones, it’s a good thing that Intel (Nasdaq: INTC) has President Biden’s CHIPS and Science Act to fall back on … ‘cause that Mobileye savings account isn’t looking quite so hot right at the moment.

I’m warning you! Don’t get political!

Never, Great Ones … especially with the midterms fast approaching. Politics and all its “You’re doomed because of blah blah Blue blah blah Red…” has no place in investing if you ask me. Just saying…

However, you should still keep a close eye on things like the CHIPS Act as a means to guide your investment strategies. I mean, that act is pumping $52.7 billion into semiconductor research, development, manufacturing and workforce development.

And trust me … Intel is watching and waiting on CHIPS Act funds like a hawk, especially right now.

You see, Intel purchased Mobileye for $15 billion waaay back in 2017. It was a good deal, if I do say so myself. Mobileye is one of the leading self-driving car tech companies out there.

Clearly, because it uses lidar, Mobileye’s hardware isn’t in any Tesla (Nasdaq: TSLA) vehicles. But its hardware is in nearly every other serious competitor’s cars.

And those are just the official production vehicles. Mobileye is also working with General Motors, Toyota, Honda, Audi and many other automakers to supply assisted-driving technology and full self-driving features.

So … $15 billion for a company that specializes in tomorrow’s driving technology and has partnerships with practically every automaker worth its salt?

So, in an effort to streamline costs and raise capital to expand semiconductor manufacturing in the good ol’ U.S. of A. … Intel is spinning off Mobileye in an initial public offering (IPO).

Intel will still maintain control of Mobileye after the spinoff, which shouldn’t be surprising. I wouldn’t want to let go of this gem of a company either. 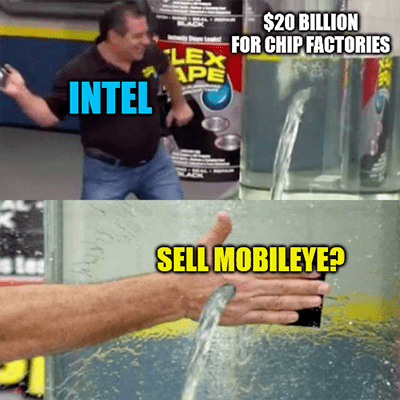 The problem is that Intel initially valued the Mobileye IPO at $50 billion.

That cash could have gone a long way toward helping Intel build out its two new U.S. chip foundries — which Intel says are expected to cost a total of $20 billion.

Unfortunately for Intel, the market has crashed hard since its initial Mobileye IPO valuation.

Market speculation is practically dead, venture capital is heading for the hills and interest rates on corporate loans are skyrocketing.

What’s the former king of U.S. semiconductor manufacturing to do?

Forge ahead, I guess … because that’s exactly what Intel is doing. It is now valuing the Mobileye IPO at just $16 billion, with shares expected to price between $18 and $20 — which would net Intel only about $820 million from the spinoff.

Ouch! That’s quite a haircut in profits!

You’re telling me! Like I said, Intel will now be forced to stalk those CHIPS Act dollars like a panther in the night.

Ugg. That metaphor was so trite, Mr. Great Stuff.

Think you can do better? Email me: GreatStuffToday@BanyanHill.com.

Anyway, while I’m not fully on board the “Intel turnaround bandwagon” just yet, I do see some promise with the Mobileye spinoff. Furthermore, I’m looking forward to seeing just where Mobileye stock lands after this upcoming IPO.

If the markup isn’t too high, I’d love to own some Mobileye stock as electric vehicles and self-driving cars start hitting the market en force in the next five to 10 years.

In the meantime, lidar tech itself is where you want to focus your Mobileyes.

Almost every carmaker is betting on this one company to bring lidar tech into the limelight: Audi alone is investing $16 billion … GM, $27 billion through 2025 … BMW, $35 billion.

And no … it’s not Mobileye.

The Good: Are You A Gambling Man, Mr. Great Stuff? 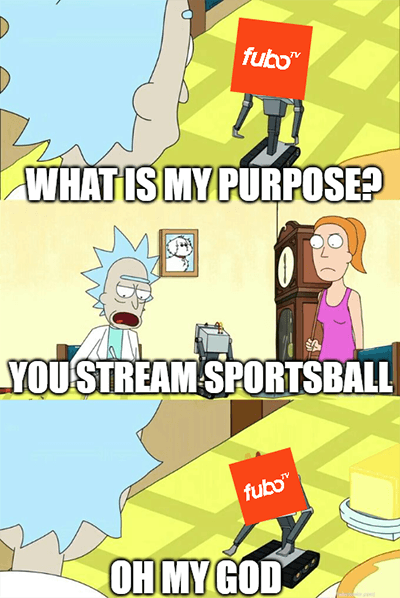 If the stakes are right…

And for FuboTV (NYSE: FUBO)? The stakes were a bit too high, apparently.

The streamer-turned-sports-betting company decided that, you know what? It’s not really into that whole sports betting thing after all. Or it wasn’t profitable enough. Same difference, really.

Thanks to everyone’s favorite “challenging macroeconomic environment,” Fubo’s strategic review of its sportsbook business found that it’d be strategic to, well, get out of the sports betting business … effective immediately.

The upside, however, is that Fubo execs anticipate stronger-than-expected revenue and subscriber growth for the third quarter … and it’s probably going to get better if the sportsbook was weighing on profits that heavily.

We won’t find out any of those juicy details until Fubo reports earnings on November 4. That was enough for FUBO gamblers to bet on for now, sending the stock up 12% after the company’s announcement. 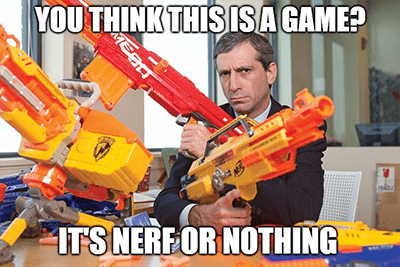 Inflation is now coming for Nerf Blasters and My Little Ponies! I’m shook, Great Ones. Just flabbergasted. And that was only the start of Hasbro’s (Nasdaq: HAS) horror show of a report.

The toymaker’s overall revenue was down 15% last quarter, with “entertainment revenue” in particular dropping 35%. Even the Dungeons & Dragons/Magic: The Gathering division saw revenues fall 16%, after a few good quarters where the segment literally carried the company’s earnings.

Now, those drooping revenue results still beat Wall Street’s ever-lower expectations, but Hasbro wasn’t as lucky when it came to earnings. The company’s results for $1.42 per share missed estimates for $1.52 per share with room to spare. And it’s the Nerf-herders who suffer, really.

Thankfully for Hasbro, it’s holiday shopping time … whether your wallet’s ready or not.

After all, why pay for sustenance and nutrition when you can get that new Nerf Star Trek Phaser Blaster? C’mon now.

If the bear market has got you (and your portfolio) down, this one’s for you: Amber Lancaster and Ian King are hosting a special event called “Bear Market Fortunes.” It’s going down on Thursday, October 20, 2022, at 1 p.m. ET.

In it, you’ll discover Ian King’s very best strategy for making fortunes in tough times. During the worst 19-month stretch of the 2008 financial crisis, he turned $350,000 into over $6 million.

If the recent market volatility has you worried, you won’t want to miss this special event.

Click here to register. Doing so will reserve your spot. No credit card. No gimmicks. 100% FREE to attend! 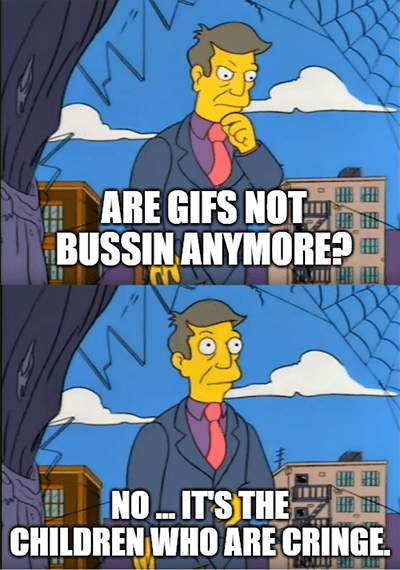 Man, what a month of misadventures for Meta (Nasdaq: META).

After unveiling its new Oculus metaverse goggles to little fanfare and hype — even from Zuckerberg himself — Meta got another punch in the face, this time from the U.K.’s Competition and Markets Authority (CMA).

According to the CMA, Meta must sell off GIPHY, the GIF-making company that Meta spent $400 million on in 2020. Immediately. No ifs, ands or buts. No more appeals. End of story.

The CMA argues that the acquisition would have restricted rival social media firms’ access to the platform’s GIFs … and, since Meta had to downplay the monopolizing impact GIPHY would have, GIPHY’s own growth was stunted in the takeover.

GIPHY was previously in talks to have companies like Dunkin Donuts use GIFs in its ads, but nope … no can do. Once under the Meta umbrella, you gotta play nice and not draw any antitrust attention, i.e., exactly the opposite of what GIPHY was doing. And so the antitrust authorities struck.

The interesting thing here, for me, isn’t Meta making a mockery of everything it touches — it’s GIPHY’s explanation for why its business is not an existential threat:

Marketplace commentary and user sentiment towards GIFs on social media shows that they have fallen out of fashion as a content form, with younger users in particular describing GIFs as “for boomers” and “cringe.”

Still, the CMA wasn’t having any of that “ooh, poor me, we’re losing relevance” argument, and so GIPHY must be divested … cringe or no.

Question is, who’s going to buy GIPHY? The company tried to sell itself to Adobe, Apple, Amazon and basically every other tech company with the budget before the Zuck and co. jumped in to “save the day.”

What do you think, Great Ones? Has the GIF age come to an end? On second thought, don’t answer that…

If you have any thoughts on today’s Great Stuff, let me know in the inbox below. And if you ever have a stock or investing idea you’d like to see Great Stuff cover, let us know at: GreatStuffToday@BanyanHill.com. 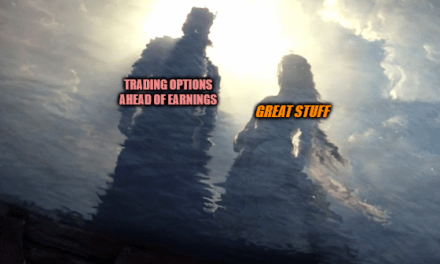 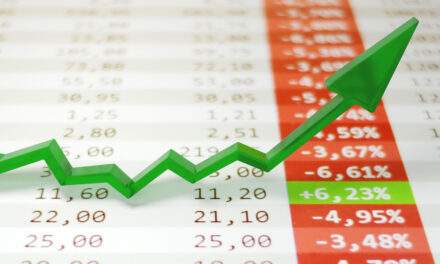 3 Signs a Small-Cap Stock Is Ready to Soar