Take the Guesswork Out of Trading With This Options Strategy 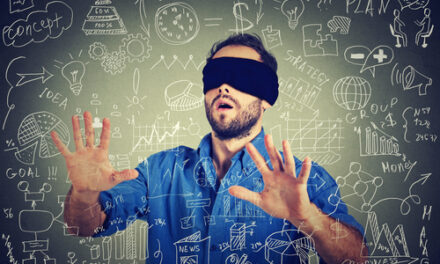 I’ll be the first to admit that my trading decisions feature a healthy dose of “educated guesswork.”

I was looking through some old tweets of mine yesterday, when I came across a real gem…

See, I knew that I called the #dogetoadollar trend early.

This was back at the end of January, when DOGE had just run from half a cent to over 2 cents in a few days.

Of course, dogecoin hasn’t hit a dollar… yet. But three months after I wrote this tweet, dogecoin ran as high as 70 cents. I only had to ride it part of the way to make a life-changing amount of money.

That’s the power of momentum in the crypto markets. There’s really nothing else like it — definitely not in the traditional stock market.

So if you’re sitting around thinking you need to start giving the cryptoverse a look — especially after bitcoin hit a new high last week — I recommend you check out Ian Dyer’s strategy while it’s open today.

Dogecoin was absolutely the best trade I ever made on a dollar-basis. Other so-called “meme” investments haven’t played out as good…

For example, I’m kicking myself this week as I’m watching Tesla hit new high after new high. I sold Tesla for, oh, a 70% gain two years ago thinking I’d be able to buy it back for a cheaper price after such a “big” move.

Nope. Tesla kept going higher… and higher… and completely left me and everyone on Wall Street behind. I’ve read Wall Street lost billions upon billions of dollars trying to short the stock.

Meanwhile, I’m still holding on to my asinine investment in electric vehicle “competitor” Nikola. It’s up 8.4% since I wrote about this junk stock in August… but I’m still down 30%.

It reminds me of one of my favorite meme cartoons, of a dude celebrating his medal despite coming in last place: 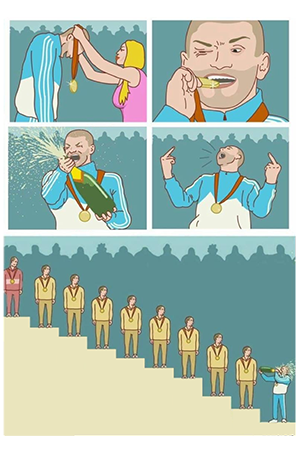 It just goes to show that just because a stock is “cheap,” doesn’t make it good. Cheap stocks are usually cheap for a reason…

Tesla is up a punishing 43.8% since I wrote about Nikola. Still, I have trouble putting any additional money into EV stocks at this point.

This Strategy Doesn’t Need the “Next Big” Stock

I’ve lost count of how many promotional videos my company has put out pitching “the next big EV investment” over the last few months. It just makes me think we’ve got to be looking at SOME sort of top… even in just the short- to medium-term.

You may be listening to me ramble and shaking your head at all this guesswork. Couldn’t blame you, because that’s all this is — educated guesswork.

Of course, I don’t leave all my investments to chance. I see the value of a systematic approach, like the one featured in Chad’s new options strategy…

Whether EVs grind to a halt or keep zooming down the freeway, we’re about to release an exciting strategy with a singular goal — to show you how to keep your portfolio in the fast lane every single week.

Chad’s been cooking this strategy up for a while — all year, in fact — and we’re finally about to release it to you in a couple of weeks.

I’m really proud of the video we put together. It shows you how, over the course of six months of live beta testing, Chad averaged 26% in five days on his trades.

The crazy part? That counts the trades that straight up lost money. Even crazier, Chad “won” on less than 60% of the trades. And the average trade still produced a 26% gain.

This is the power of his Fast Lane strategy, and I’m really, really excited to show it to you.

You can sign up here to be first in line to see it the moment it’s ready. We will have a limited number of spots available and it’s first come, first served, so I hope you turn up and show Chad your support.

Our goal was to make this the best options strategy you’ve ever seen, and I think you will be very pleased with the results.

P.S. I made three triple-digit gains of 100% or more last week from Mike and Chad’s free research here in True Options Masters.

On October 1 Mike recommended lithium as his “sector to watch.” I went ahead and bought a call option and turned a 9% gain in LIT, the lithium ETF, into a 119% gain.

I did the same with Chad’s call to buy utilities and made 109% there.

And last Thursday after Chad brought our attention to AMAT, I bought calls that expire next month. I sold the very next day for a 132% gain in 24 hours.

Guys… if you’re not taking advantage of the FREE research they’re offering you, please start taking this seriously.

These guys are real professionals and they’re laying up free trades for you. When they see a short-term profit window, it doesn’t hurt just to invest a little money into an option to leverage the move. At worst you lose the tiny bit you put in the option, at best you double your money or better.

For those who are still learning options, Mike has been covering some basics for you on Tuesdays. So lean in. Again, I cashed out three triple-digit winners last week from the same research they’re providing here for free. You could have too, and it won’t be the last time.

My hope is that you’ll make so much money from their free recommendations that you’ll be BEGGING to pay up for their premium research.

If you’re there already, then pay attention to the options strategy Chad’s about to put out, because this is as exciting as it gets.

Chart of the Day:
I Got a Bad Feeling About This 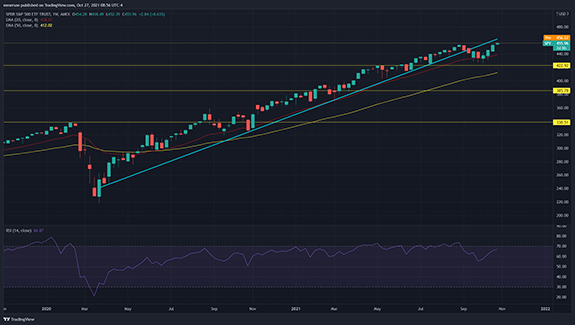 It’s been a little while since we took a long-term look at the broad stock market. And today I’m seeing an intermediate-term caution sign.

There are two issues I see on this chart of the SPDR S&P 500 ETF (SPY). One is the blue trendline.

This trendline goes all the way back to the first real bounce and retest after the pandemic crash. Since then, we’ve held the blue line and put in new high after new high.

Until late August, anyway. SPY definitively broke down through the blue uptrend line and spent the last couple months chopping around beneath it.

Now the time has finally come to retest that former blue support as resistance. And something tells me it won’t be a clean break back through, which brings me to issue #2.

Take a look at the Relative Strength Index (RSI) indicator beneath the chart. The RSI is making a lower high as SPY made a higher high — a pretty strong bearish divergence.

Of course, we have to see how the week closes out so we have a confirmed RSI print to work with. But right now, SPY would have to make a big upside move to nullify this divergence.

There’s also a strong bid at the 20-week EMA. If I was shorting here, I’d make that my price target. 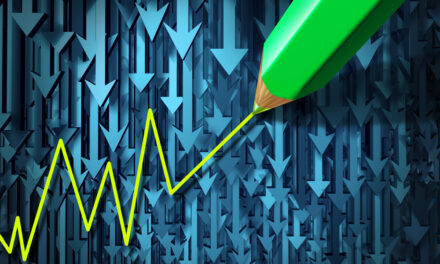 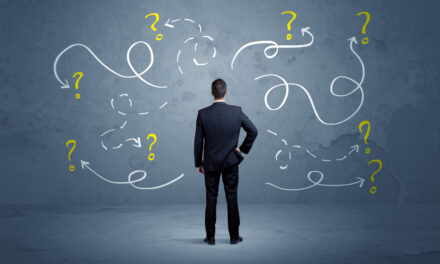 To Win at Investing, Accept That There Is NO Normal