Home » Economy » A Smart Way to Invest From This Earnings Season

A Smart Way to Invest From This Earnings Season

Earnings season is finally coming to a close. So far, over 90% of the companies in the S&P 500 Index have reported their quarterly earnings.

This is one of the most important events for investors. It allows us to keep tabs on companies, how well they’re growing and how well the general economy is doing.

One way to gauge this is by looking at how much money companies are making compared to Wall Street’s predictions.

Overall, it was a historically great quarter. The 9.9% growth in sales over the past year is the best since 2011.

So now we’re at the same level as when we were coming out of the recession. That’s extremely good for the ninth year of a bull market.

And as the charts below show, just about every sector beat expectations on both sales and profits. 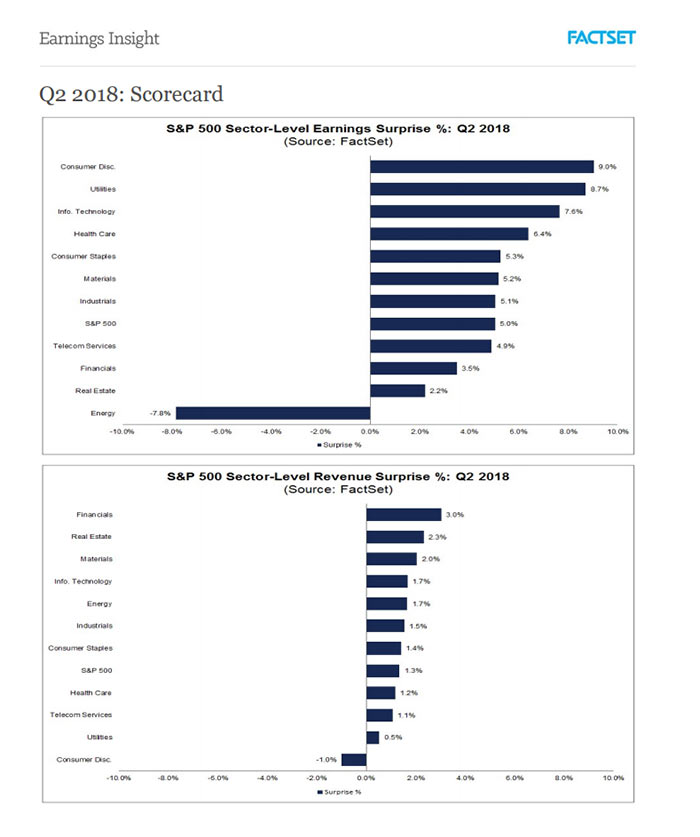 The top chart, which shows positive surprises in profits, shows that consumer discretionary stocks exceeded expectations the most. However, they’re at the bottom of the list for revenue.

Consumer discretionary stocks, by definition, are things that people buy when the economy’s doing well. That includes clothes, going out to eat, vacations, video games and more.

Because of that, it’s one of the most important economic indicators because it shows how much people spent on these things compared to what they were expected to spend.

So, it’s odd that consumer discretionary stocks did so well on profits but not sales. However, just because they missed expectations by 1% doesn’t mean they did poorly.

The expectations were set unusually high for this particular sector because of the immense growth we’ve seen in the overall economy. The mark it had to meet was 8.1%, which is extremely high for this sector.

If you look at the big picture, we still have the highest level of consumer sentiment in almost 20 years, according to the University of Michigan Consumer Sentiment Index. And big sections within the consumer discretionary market, retail and food, posted their highest gain since 2012.

So overall, this quarter was another great one. And it was also the second straight quarter we saw profits grow 20% or more. That’s the first time since 2011.

In short, it’s a great time to buy stocks.

The S&P 500 has exchange-traded funds that contain leading stocks from each sector.

They’re easy to buy. It’s just like buying a normal stock, and for a low price you can spread out your money over hundreds of stocks.

By clicking here, you can find the ticker symbol that matches the fund for each sector. By entering the symbol in your brokerage account, you’ll be able to invest in an entire sector, just like buying a stock.

The Price of Copper Is Down. Buy Copper Stocks Now