I know I’ve harped on alternative energy as the way of the future numerous times in the past. That’s still true. Alternative fuel cars are still going to dominate the roadways, even electric cars — Elon Musk’s run in with the U.S. Securities and Exchange Commission won’t stop that train from rolling on.

But worldwide domination by alternative fuels is still more than a few years off.

In the meantime, we’re left with oil. We’re also in the middle of a tenuous global situation for this so-called lifeblood of the global economy.

My colleague Matt Badiali started warning you about this situation way back in March. I know a lot of you don’t like politics in your investing, but we can’t deny that political actions have a real effect on global markets and investing.

For oil, there is a global supply squeeze play going on right now with Iran and Venezuela. Turmoil in Venezuela has removed millions of barrels per day from global supply, and Iranian sanctions are threatening to do the same in the Middle East.

The worsening situation has led Brent crude oil prices to soar roughly 6% in the past month. Oil suppliers like Exxon Mobil, Chevron and ConocoPhillips have been in rally mode since August.

Furthermore, there is no sign of relief on the horizon. U.S. officials have said they will not release oil from national strategic reserves to stem the rising tide.

While there is plenty of upside left for stocks like Exxon, there is another group of oil sector stocks that are just beginning their bull run amid this building oil crisis. Someone has to help the major oil companies find and pump black gold out of the ground.

Today, we’re going to find the best oil services investment that will help you capitalize on oil’s growth.

Old Jed’s a Millionaire, Why Not You?

The days of the Beverly Hillbillies are long gone. Crude oil no longer just bubbles up out of the ground. To make your oil millions, you have to explore deep ocean shelves, drill down to exceptional depths and transport the stuff back to processing facilities.

In short, Transocean makes it possible to bring oil up from wells deep below the ocean floor.

Because of the harsh environment for such drilling, there are very few companies that can compete with Transocean. What’s more, because oil prices were historically low for so long, very few companies have explored for oil or opened new wells. Rising oil prices have sent companies scurrying for new oil. Analysts expect demand for rigs to rise 13% in the next two years due to soaring oil prices.

Additionally, Petrobras just re-upped its contract with Transocean for a 5% royalty per day, about $16 million, through October 2021.

As a result, fundamentals are improving rapidly for Transocean. The company swung to a surprise profit of $.16 per share last quarter. Analysts were expecting a loss of $.07 per share.

Revenue is growing at steady clip as well, projected to rise 10% this quarter and 20% next quarter. With oil going to $100, I expect many analysts to revise their currently low projections for 2019.

In fact, this is already happening in the brokerage space. The rising demand for deepwater rigs and the low supply of such drilling equipment on the market prompted Wells Fargo to upgrade RIG stock to “outperform” with a $16 price target on September 19.

With more analysts sure to come to the same conclusions as Wells Fargo, the time to get in on RIG stock is now.

There is one caveat to diving into RIG at the moment that investors should be aware of. The shares are on the verge of being overbought. RIG stock has rebounded swiftly from their early September sell-off.

That sell-off, by the way, was sparked by Transocean’s acquisition of competitor Ocean Rig for $2.7 billion. In short, RIG was punished for planning for the future and increasing its market share. It’s a common theme in the market today.

That said, the rebound from that sell-off has RIG trading above former price resistance in the $13.50-$14 region. The brisk rally has pushed the stock’s 14 Relative Strength Index to the 70 area — one associated with being overbought. 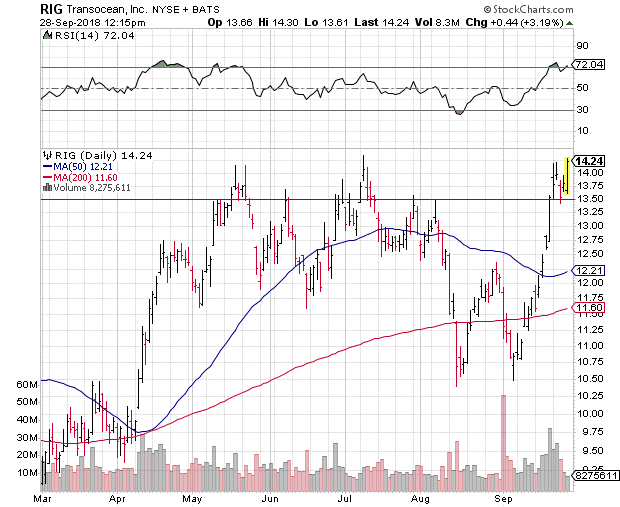 If you’re squeamish about RIG’s momentum, you might consider waiting for RIG to pullback to $13.50 before adding the stock to your portfolio. The shares are due for a bit of consolidation, which plays in your favor. However, if support at $14 gains traction, it may be some time before RIG sees $13.50 again.