It’s that time of year again.

Where the frenzy for college basketball is at its peak. After just the first round of the NCAA Tournament, everyone’s brackets were busted.

If you watched any of the games over the past few days, you’ll see what the real magic for the tournament is all about — the underdog’s chance to shine.

The biggest game that will be placed into the history books so far is the University of Maryland Baltimore County, a largely unknown college and a 16 seed in the tournament, toppling what was a likely candidate to win it all in the University of Virginia.

It is the first time ever that a 16-seed team, the dead-last seed, won in the first round.

No one would have picked this upset in their right mind.

Yet, it happened. The underdog came to shine.

And today, I have your March Madness stock pick.

It’s an underdog company that will prove to be a winning story over the next few months, and I’m sure it’s one that isn’t on your radar.

If you pull up a chart of the Real Estate Select Sector SPDR ETF (NYSE: XLRE), it doesn’t look pretty.

It peaked in mid-November, and has been on a steady decline since then, setting up for this underdog story. 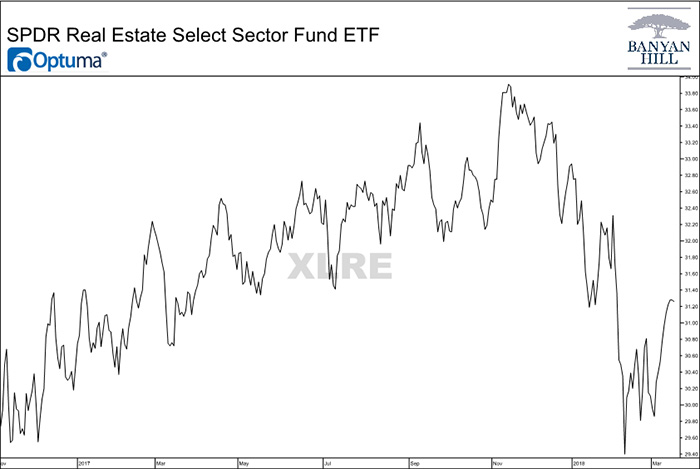 There is one major reason for this. But as I’m about to explain, those worries are overblown in the short term, and that sets up a short-term opportunity to profit from the sector.

So don’t be alarmed by the look of its chart.

While many will look at this chart and say you shouldn’t touch the sector, there’s an opportunity here, and I have one stock for you that is poised to benefit.

As long as you can get past the ugly chart on this, you’ll realize there is an opportunity here.

And it starts with inflation expectations.

As you may recall, back in mid-November was when worries about inflation began to heat up.

Investors saw that the government was set to pass a tax bill to stimulate the economy, an economy that was already showing almost full employment and grinding higher at a steady pace.

When you throw some fuel into the economy, it creates higher prices. As wages go up, so do the goods produced by the labor that receives the wages.

Those worries poured over into increased expectations for interest rates.

The tool the Federal Reserve uses to combat inflation is increasing interest rates.

As rates rise, it makes what is largely a debt-driven market in real estate more expensive. Also, real estate stocks, like the one I’m recommending today, also known as real estate investment trusts (REITs), are attractive to investors for their yield.

If investors can start to get higher yields through Treasurys or secure bank certificates of deposit, then it reduces demand for these stocks.

All of this has played a role in the pullback.

But now those expectations are cooling off a little bit, and we likely won’t see inflation pick up for several months now.

As inflation remains subdued, so will expectations for interest rates, and the real estate sector will go through a relief rally.

That’s exactly what we want to benefit from — a short-term pop in the sector.

And to benefit, we are going to grab a retail-based REIT — Kimco Realty Corp. (NYSE: KIM).

The Future of Retail Real Estate

Kimco owns and operates what it calls “open-air shopping centers.” Think of strip malls, or standalone stores not tied into a typical mall.

Retail real estate has been an unloved area of the sector for a while now. It’s no secret the surge in online shopping for everything has blindsided the industry.

But these companies are adapting, and they are finding tenants to fill what were once vacant spots. I don’t know what the future of retail real estate will look like, but I know it will still exist.

I see strip malls thriving all around.

And whether they’ve added a laser tag, putt-putt, doctor’s office, trampoline park or anything that needs a physical location, these once-vacant locations are getting filled.

Plus, as I mentioned above, the main reason this sector has languished since November is interest-rate expectations, and that’s letting up in the short-term.

That gives us the opportunity today to buy Kimco and hold onto it for a few months.

For the stock, just place a 7% trailing stop-loss on it until it climbs 20%, then you can tighten it to whatever you wish to lock in.

We are using 7% because at the current price, that would be taking out the low it set in February. So it gives us plenty of wiggle room from the entry price.