Home » Economy » Government & Politics » Amazon: Can — and Should — It Be Reined In?

I have a confession to make.

I shop on Amazon.com. A lot.

I know, I know. I’m supposed to be “the privacy guy .” The big online retailer is a data hog.

But where else am I going to find things like this for my anime-obsessed daughter?

That’s the frustrating thing about Amazon.

It’s steadily destroying the local retail industry across much of the U.S. It scares the bejesus out of other mass retail chains in every industry. All Amazon CEO Jeff Bezos had to do was cough “pharmacy,” and CVS and Rite-Aid shares tanked last year.

But … Amazon creates real consumer value by providing access to almost anything you might want (or even need), quickly and at reasonable prices. Its customer review system adds even more value.

Like it or not, Amazon isn’t going away, and small-scale retail of mass consumption items isn’t coming back. Technology has changed the rules of the retail game, and Bezos was smart enough … or lucky enough … to sense that early on.

So why has Amazon’s share price fallen more than 10% since late February? Why does President Donald Trump hate it so much? Above all, can — and should — Amazon be reined in?

Confessions of an Amazon Early Adopter

I created my Amazon account in 2004, when I was still living in Cape Town, South Africa.

Amazon was the only source for American products I still needed after years living at the southern tip of Africa — mainly DVDs by oddball directors like Baltimore’s own John Waters, or “worst director of all time” Ed Wood.

Trust me — you couldn’t get those at the corner video store in my neighborhood. It was Amazon or nothing.

Amazon was still an emerging company when I returned to Atlanta in 2008. Since then … well, look at this: 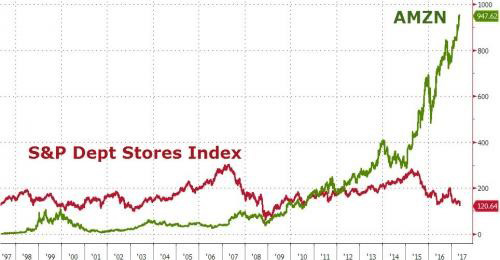 Today Amazon enjoys a 44% share of U.S. e-commerce sales. That’s expected to hit 50% by 2021. Its shipping and video streaming service Prime has an estimated 90 million members.

Main Street America views the company relatively favorably. Unlike the hated behemoths in cable and telecoms, Amazon isn’t seen as a monopoly.

That’s because it isn’t. Amazon accounts for only 4% of all retail sales in the United States. Its revenue is a third of Walmart’s.

The reality is that despite Amazon’s domination of e-commerce, the range of products it sells is limited in significant ways. It sells nonperishable goods that don’t require a third-party’s authorization. That rules out two enormous chunks of the U.S. retail market — groceries and prescription drugs.

Amazon is trying to gain a foothold in those markets, of course. By all accounts its foray into groceries isn’t going very well.

But that’s not where the trouble lies.

In movies and in real life, criminal gangs tolerate each other as long as they stay on their respective turfs.

The same is true of the U.S. retail sector.

Other than independent booksellers, which the company has effectively destroyed, Amazon hasn’t caused serious harm to other retailers.

The range of products it sells is vast, but its share of specific markets — power tools, for example — is small. And while Amazon’s prices are competitive, they aren’t predatory.

So, while most other U.S. retailers have a healthy respect for Amazon, adapting by beefing up their own online divisions, they haven’t raised serious competitive alarms.

But it’s not the company’s market share or pricing power that worries critics … its Amazon’s buying power.

As Amazon’s sales grow, its influence over suppliers is increasing. It exerts buying power in three ways:

1. By demanding low prices. Amazon’s share of power tool sales may be small, for example, but it is a significant buyer for any one company, like Milwaukee Tool or Black & Decker. That gives it leverage to demand low wholesale prices, increasing its margins without having to increase its consumer prices.

2. By intimidating uncooperative suppliers. Amazon has been accused of preventing certain companies’ products from appearing in customer searches on Amazon.com.

3. By demanding low rates from shippers like UPS, FedEx and the U.S. Postal Service (although Trump’s criticism of Amazon’s Postal Service deal seems to be wrong.)

A Threat From an Unexpected Quarter

Consumers don’t find Amazon problematic, but its suppliers increasingly do. And the U.S. government listens to corporate lobbyists, not individual consumers/voters.

But will supplier unrest be enough to tame Amazon? With populist winds rising, it certainly won’t help.

But the big e-retailer has an Achilles’ heel.

Famously, Amazon has never declared a dividend. The company generates tons of cash, but it always goes toward expansion and acquisitions.

Instead, Bezos has relied on share price appreciation to attract investors. Holding big chunks of Amazon stock allow investors to borrow against their portfolios and use the proceeds for other plays. Even Amazon itself does that: It bought Whole Foods with borrowed money.

Under increasing pressure from Trump and an in increasingly bearish turn on tech stocks, however, Amazon’s share price has lost more than 10% in the last week as investors who bought it in late 2017 are leaving in droves to lock in profits. It’s the biggest drop in two years.

If anything takes the wind out of Amazon’s sails, it’ll be that share price. And with all the leverage based on Amazon stock, a dip could be contagious.

That makes it one to watch … whether you own it or not.

Editor’s Note: The stock market had another rough day today. And unfortunately, the months and years ahead are going to be even worse as more government manipulation, increased Wall Street fees and additional stock market crashes continue to undermine our investment returns. That’s why Ted Bauman and his team created a system that lets any portfolio continue to grow in reliable, clockwork fashion, day in and day out, just like it’s supposed to. To find out how Ted’s system puts most investment funds to shame, click here.

Guess Who Wants to Protect Your Cryptos?