Millennials Face a Looming Retirement Crisis – Time To Talk About It

Brokerage Vanguard Group was the latest to publish a study that suggested as much.

So, like a stereotypical millennial, I posed the question to my social network.

Of my friends and family who responded, 45% of them invest in the stock market, and 55% don’t.

A couple of caveats: My sample size was tiny. Also, many who responded, like me, grew up in a middle-class family and have a postsecondary education.

It turns out that among the 83.2 million working millennials in the U.S., the numbers are far more alarming.

When I surveyed my friends and family, I asked about active investing — not retirement savings. I assumed nearly everyone had a 401(k).

But according to the National Institute on Retirement Security (NIRS), two-thirds of us ages 26 to 37 have no retirement savings. 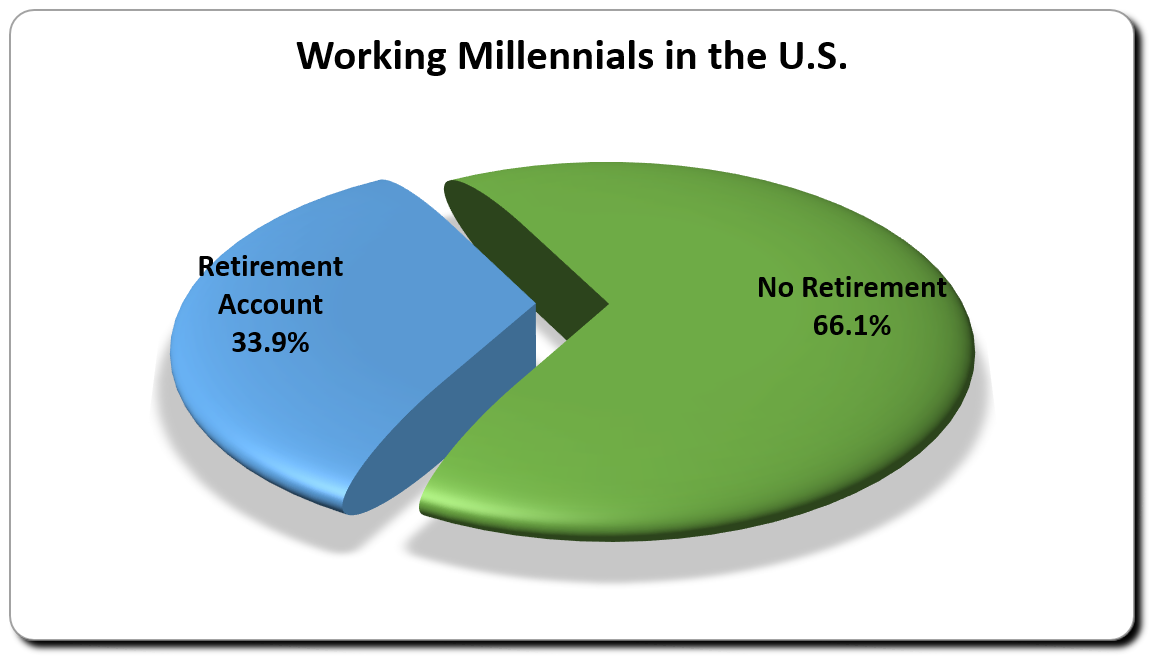 Now, exactly who qualifies as a millennial depends on your source. NIRS uses the term for individuals born between 1981 and 1991.

So the youngest people represented in the chart are 27 now. If they got a four-year degree followed by an entry-level position, they’ve been working for about four years.

And those are the youngest people surveyed.

Should we throw up our hands over this avoidable crisis that we’ll have to deal with in 30 or 40 years?

Are all millennials just lazy and entitled?

I don’t think so.

In my next several articles, I want to look at how we can reach out to some of those 55 million young Americans to show them it’s never too early to start thinking about retirement.

And it’s never too late to begin saving.

It’s Not Prying. Talk About It.

To a young adult who’s working their first full-time job, retirement feels like a long way off.

When I got my first “real” job, I signed up for the company-sponsored 401(k) because my aunt told me I should.

“Just contribute enough so you get the company match. You won’t miss it.”

My aunt is smart. She’s great with money. So I listened to her. And those small contributions added up.

Don’t be afraid to talk about saving for retirement — especially if someone you know just got a new job.

It could be as simple as sharing an article like this one and asking them to read it. (We post all of our articles to our Sovereign Investor Daily page on Facebook.)

When my aunt said signing up for a 401(k) was a no-brainer, I didn’t think she was prying. And, most importantly, I listened.

This is just my first suggestion. I’ll share another soon.

In the meantime, what made you realize the importance of saving for retirement? Please reach out to sovereigninvestor@banyanhill.com to share.

Now I think I’ll write my aunt a thank-you note for the advice.

How Does a Reverse Mortgage Work?

We Can Solve the Millennial Retirement Crisis