Kellogg Killed The Cereal Star, Homebuilding Billions, RV There Yet? 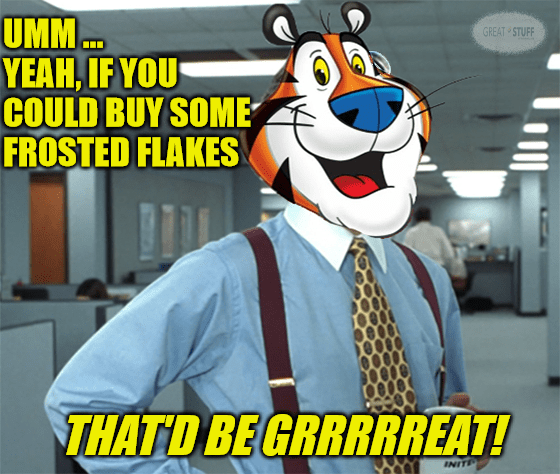 Great Ones, it’s official. We’re looking at the end of an era today. But I think we all saw the writing on the wall…

Back in the ‘90s, they took our Saturday morning cartoons. Gone. Poof. But that was OK because we still had bowls of cereal, ice-cold milk and plenty of ways to get our Looney Tunes, Great Space Coaster and G.I. Joe fixes.

But now … finally … they’re coming for our cereal.

Specifically, Kellogg (NYSE: K) is cutting itself into three separate companies in order to “unlock value” for investors.

But I think once you see the actual breakdown of how Kellogg is splitting itself, you’ll see that this is less about “unlocking value” and more about shedding dead weight.

Let’s look at the early details of the split. Per Kellogg, the company will divide itself up as follows:

“Global Snacking Co.” will be the largest of the three new companies, with net sales of about $11.4 billion. The company will retain Kellogg’s global snack business — duh — its international cereal and noodle operations and its North American breakfast brands. You know, PopTarts, Eggos and Nutra-Grain?

“North American Cereal Co.” will be the second-largest of the three spinoffs, with net sales of roughly $2.4 billion. The company will retain Kellogg’s U.S., Canada and Caribbean cereal business — a business that has struggled with supply chain issues, profit margins and slowing sales.

“Plant Co.” is the smallest of the spinoffs, with only about $340 million in net sales. As its temporary name suggests, Plant Co. will be a plant-based foods company, competing with the likes of Beyond Meat and Impossible Foods.

Clearly, these names are all temporary — that’s how early in the process we are here. That said, if you look at how the split is happening, a clear pattern emerges.

Kellogg is spinning off its struggling cereal business and its speculative alternative meat business — both of which are liabilities for the company given the current economic and stock market conditions.

But you don’t have to take my word for it. Here’s Kellogg CEO Steve Cahillane with some very flowery corporate speech:

These businesses all have significant standalone potential, and an enhanced focus will enable them to better direct their resources toward their distinct strategic priorities. In turn, each business is expected to create more value for all stakeholders, and each is well-positioned to build a new era of innovation and growth.

Ah, opportunity, innovation and growth. That sounds amazing, doesn’t it?

Except that U.S. breakfast cereal consumption has dropped off the face of the earth — I blame the loss of Saturday morning cartoons — and more expensive meat alternatives aren’t selling quite as well right now. And they’re sure to take an even bigger hit once the recession rolls in. 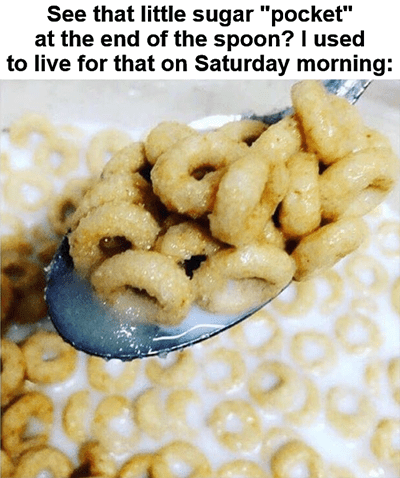 In fact, “Global Snacking Co.” is basically the entirety of Kellogg. I mean, Cahillane is keeping the Pringles, Cheez-Its and the Town House crackers! He knows where the good stuff is.

And nobody wants soggy old Corn Flakes anymore. By the way … do any of you know why Dr. John Harvey Kellogg invented corn flakes? If y’all want a rather disturbing read, go look that one up. It’s bizarre.

“Global Snacking Co.” — aka new Kellogg — will most certainly be worth investing in once the split is final. Snack sales are climbing around the world, and I would expect even more growth during a recession. People love their snacks.

“Plant Co.” looks like an interesting prospect given the current consumer trends toward meat alternatives. It certainly has potential, but it’s facing major competition from established brands and the potential for reduced consumer spending during a recession.

If you’re jonesing for more meatless meat investments, check it out. Otherwise, I’d hold on this spinoff.

“North American Cereal Co.” I wouldn’t touch with a 10-foot pole … and as a cereal buff, that makes me sad.

I can’t see how the old-school cereal industry is going to survive. Gen X is the last bastion of support for traditional U.S. breakfast cereals. None of the younger generations are buying it, save for a smattering of “woke” millennials.

I know. I’ve tried to get my kids interested. It’s not happening.

OK, so … that’s a no-go on cereal. Got anything I should look at to, you know, invest in?

This strategy is all you need to make simple trades and profitable returns in a week or less in any market. It’s called One Trade, the culmination of over 30 years of Mike Carr’s research from his illustrious career as a star trader.

The Good: Lemon And Lyme 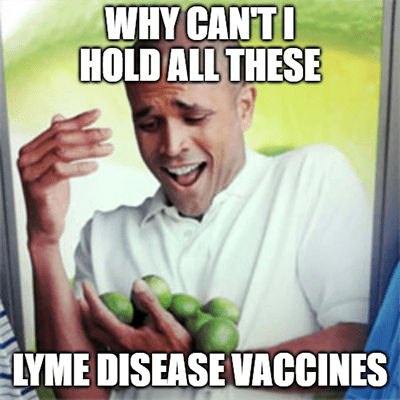 OK, we’ve Val-never mentioned the lil’ ol’ biotech called Valneva before. But apparently, Pfizer’s (NYSE: PFE) had its eyes set on the company for a pfreaking while. Valneva’s been developing a vaccine for Lyme disease, because hey, someone has to.

To help pfund the project, Pfizer just announced a $95 million equity stake in the company. Valneva’s vaccine is set to start on phase 3 trials later this year, with Pfizer’s cash coming in clutch to cover the costs.

Oh … and did I mention the news sent the stock soaring 82% this morning? Yeah. 82%. That’s the kinda wake-up call I wanna have (c’mon, let’s stop with the apocalyptic ones already). That’s the power of biotech, baby.

Chipotle just announced that all stores will start accepting cryptocurrencies through Flexa, a digital payments platform.

So even though the general public’s fervor for cryptos may have cooled down lately, big businesses are still going full-speed ahead. They see that cryptos are the future of finance.

And one coin in particular is gaining traction: Experts say it will be 20 times bigger than bitcoin.

The Bad: Darkness There And Nothing More 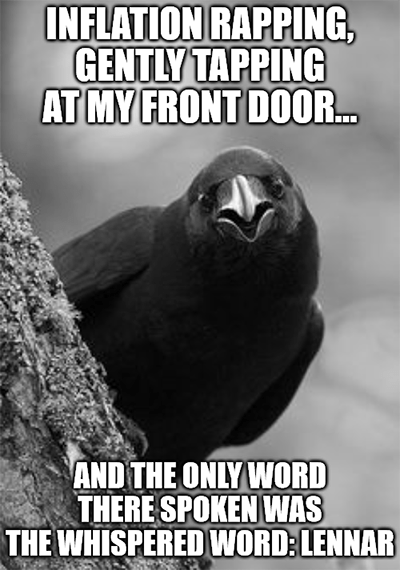 Deep into that housing market darkness peering, long I stood there wondering, fearing. Doubting, dreaming dreams no mortal ever dared to dream before. I’ll never afford a house in this market. No more!

But earnings season’s silence was unbroken, and the stillness gave no token. And the only word there spoken was the whispered word … “Lennar?”

Really? All that buildup for Lennar Homes? Why don’t you go Poe me a drink…

Alright … but you gotta get over it. Just like Lennar (NYSE: LEN) investors need to realize that the company’s seemingly brilliant earnings report might be the last brightness they see for a while…

First, the facts and figures: Lennar’s homebuilding revenue shot up 30% to $8.36 billion on the quarter, topping analysts’ expectations with room to spare. Margin on home sales also improved from 18.6% to 23.4%.

For as much as Lennar investors might want to see that revenue growth, they should certainly be asking themselves: “How sustainable is this, really?” Lucky for you, we already have an answer for that: It’s only sustainable for as long as homebuyers are willing to pay exorbitant prices.

We literally just mentioned this the other day: Recent home starts and permit data have many people thinking that we might be nearing the housing market’s inflection point — where the combined impact of mortgage rates, materials costs and higher housing prices are just too much for prospective homebuyers to bear.

And oh, look, wouldn’t you know? Lennar warns this is already happening:

The weight of a rapid doubling of interest rates over six months, together with accelerated price appreciation, began to drive buyers in many markets to pause and reconsider. We began to see these effects after quarter end. — Lennar executive chairman Stuart Miller

Interesting. Very interesting. Judging by LEN stock rising 3% on the news, all those worries are next quarter’s problem. Pay no attention to the devastation behind the curtain.

The Ugly: Wherever I May Not Roam

Pssst … hey, all you RV owners!

If you bought one of these road-living behemoths during the pandemic, let me ask you this: How’s the gas situation treatin’ ya?

I’m guessing we’re past “arm” and “leg” territory at this point: Alright, little Johnny. You’ve got two kidneys. You don’t need them both, and we need to get home…

It’s official: 2021 saw the highest RV production in North America … like, ever. It doesn’t seem to be slowing down anytime soon either: Thor (NYSE: THO) says that in the past three months, RV sales are up 34.6% compared to 2021.

Wait, when did the God of Lightning start commenting on RV sales?

Har har har. This is Thor the RV maker, the distributor of diesel-downing domiciles-on-wheels. Despite it costing some RV owners up to $900 to fill up a single tank, they aren’t giving up on road-bound traveling.

“It’s not a recreational vehicle, it’s a lifestyle.” — said the guy trying to convince himself that paying a grand for one week’s worth of dinosaur juice was a good idea.

Anyway, those in the RV industry have their own … how do we say this … “innovative” ways to describe the current crosswinds facing RV owners. Boom, two Quotes of the Week!

If you live in Phoenix and were thinking of Yosemite in California, you might do the Grand Canyon instead. — Randall Smalley, marketing and business development lead at Cruise America

Oddly specific, but alright, I’ll go with it. However…

RVs are not gas-powered vacations. They look like they are because they have a steering wheel and four wheels. — Jennifer Young, co-founder of the RV marketplace Outdoorsy

Umm … you what now? What does this even mean? Apparently, houses aren’t actually houses either. They look like they are because they have a kitchen sink and four walls.

There aren’t too many times that I literally “can’t even,” but right now, I’m not even close to even-ing.

And now, for a bright spot of positivity to carry Tuesday on home.

Oh, indeed. We always try and look on the bright side of life — er, the market — at least for $#!%s and giggles.

See, some things in life are bad. They can really make you mad. Other things just make you swear and curse, like a bear market sell-off getting worse and worse.

So when you’re chewing on life’s gristle, don’t grumble, give a whistle! This’ll help things turn out for the best. Aaaaaaaaand … don’t forget to look on the bright side of today’s Chart either: 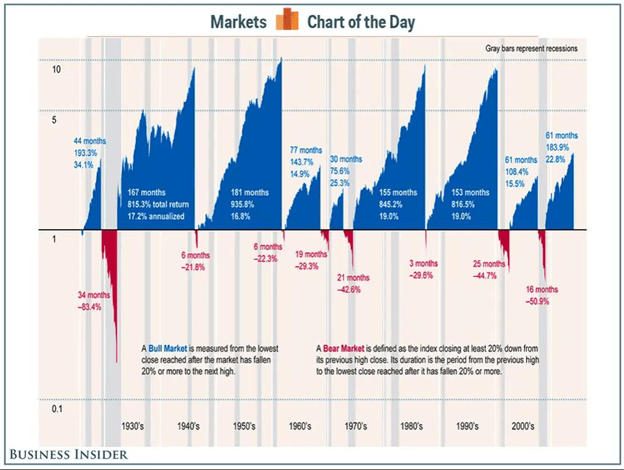 Look, Great Ones, it’s your favorite — a bunch of jagged lines again.

Oooh, ahh. But what’s it all about? The numbers, Great Stuff, what do they mean?

Honestly? Just that things get better.

This is a retrospective, a flashback from the way back, to show you that things can go pear-shaped … but they always get better and provide great buying opportunities. Even if you go all the way back to the Great Depression.

By that, I mean holding stock in balanced, well-run companies that thrive amid in-demand industries. Taking your gains where you’ve got ‘em (if you’ve got ‘em).

Whatever bear market strategy floats your boat, just remember to stay afloat … with, umm … Great Stuff. Or something? (Sorry, this “positivity” suit doesn’t fit quite right. I think it’s the shoulders.)

Anyway, if you have thoughts to share on bear markets, biotech and all the ways to slice up cereal, drop us a line at GreatStuffToday@BanyanHill.com and let us know! 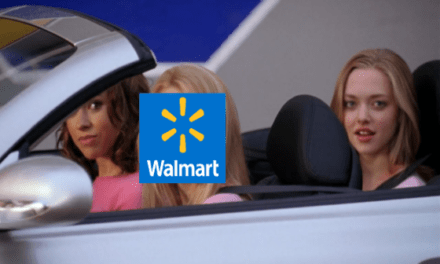 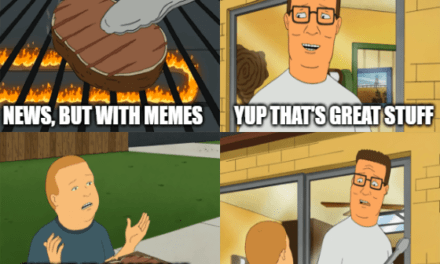