We are gearing up for higher oil prices.

It’s almost inevitable that the beginning of fall will coincide with higher oil prices. You see, the U.S. pulled out of the 2015 agreement with Iran. That agreement allowed the Middle Eastern nation to export oil and trade with other nations.

Now the U.S. put the trade sanctions back on, with oil sanctions to follow in November.

This is important because Iran exported 2.2 million barrels of oil per day in July. That’s far more oil than Russia, Saudi Arabia or the U.S. can replace. The chart below shows Iran’s crude oil exports since the start of 2017: 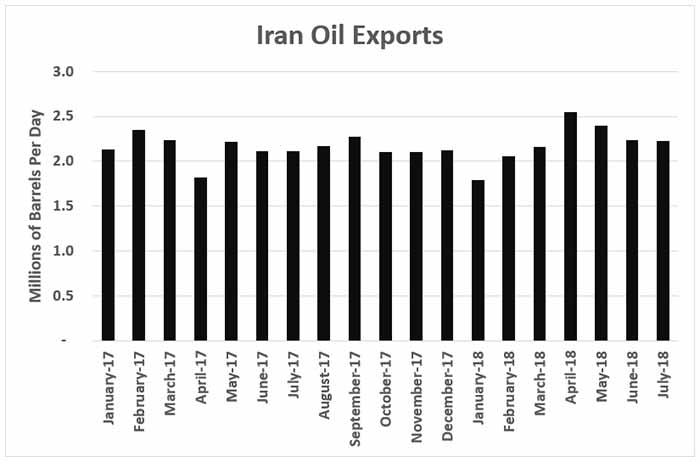 The big question is, just how much of this oil will go away?

Nothing Else Can Go Wrong for Oil

For example, Indian Oil Corporation Chairman Sanjiv Singh said: “Even if Iran supplies get disrupted, the supplies to the Indian market will still continue. That’s assured.”

While China and India are the two largest consumers of Iranian oil, there is a lot of oil that could stop flowing. South Korea, Japan, United Arab Emirates and the European Union combine to take over 1 million barrels per day from Iran.

They will need to secure supplies from the U.S. and Saudi Arabia to cover the shortfall.

That alone won’t necessarily make the price of oil go up. There are roughly 900,000 barrels per day of excess capacity in the market right now. However, it means nothing else can go wrong.

Venezuela’s supply can’t fall anymore. There can’t be disruptions in Nigeria or Libya. And there must be calm in the Middle East. If all those things go right, the oil price should stay where it is.

Oddly enough, that’s the way most speculators are betting right now. According to the Commodities Futures Trading Commission’s Commitment of Traders report, speculators are the most bearish they’ve been on oil prices since 2016.

They were wrong then too.

That’s why we are long oil in my Real Wealth Strategist newsletter, and why you should be too.

This Indicator Just Signaled the Next Oil Rally