I follow the Atlanta Federal Reserve’s GDPNow estimate every quarter.

For the last several years, it has had an ominous trend.

What would start off as a promising quarter with high expectations would trend lower as new data came out.

Ultimately, this showed that the economy simply wasn’t living up to the expectations that were laid out at the start of the quarter.

That changed in the second quarter of this year.

While estimates started at 4.1% for GDPNow, the final reading was 3.8% — basically flat as new data was rolled out.

This was great to see, and it’s a stark contrast to what I have been writing about. If this new trend holds up, it tells us to expect a major rally in the stock market.

Take a look at the development over the second quarter. 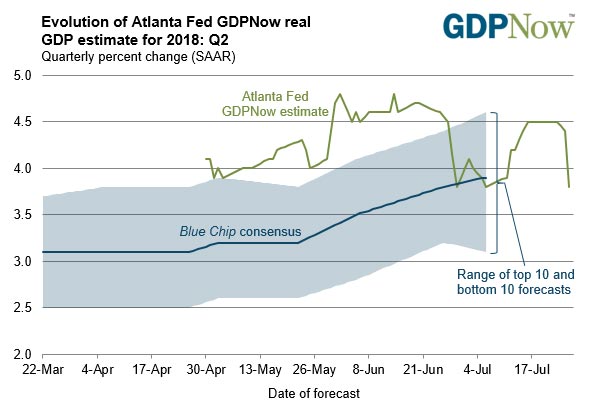 Now, we want to see this trend continue, or perhaps even see higher estimates as data is released.

That would be a sign that our economy is really booming.

By the way, one quarter bucking the usual weak trend doesn’t alter the whole picture for the economy. Until the economy can consistently hit expectations and show strong growth, we are still stuck in a slow-growth environment.

Now, we can watch the development of the Atlanta Fed’s third-quarter GDPNow forecast.

It’s early in the quarter, but after starting at 4.7%, the estimate was quickly increased to 5% after the construction spending report from the U.S. Census Bureau and the manufacturing  report from the Institute for Supply Management were better than expected.

However, after two disappointing economic reports released on Thursday, the Atlanta Fed adjusted its estimate down to 4.3%, as you can see in the chart below: 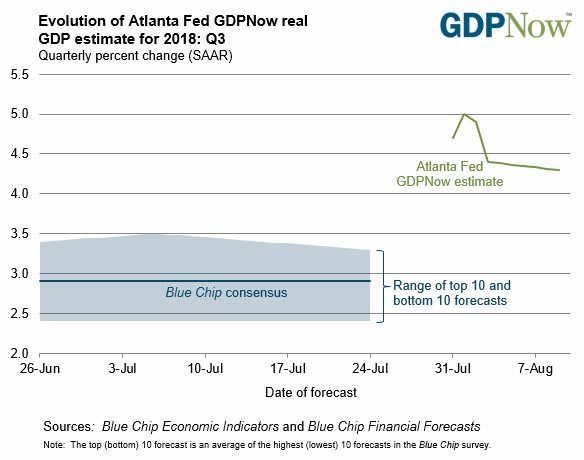 And as you’ll notice at the bottom of the chart, a range of forecasts by some of the best economist is showing that this reduced growth rate may still be too high.

Though, to be fair, the consensus estimates for the second quarter ended up turning sharply higher.

If the third quarter follows a similar trend, it shows our economy is starting to feel the effects of President Donald Trump’s stimulus package, and a rush to make deals ahead of a trade war.

In the end, this rush benefits our economy in the short-term and will bolster the broad stock market to new all-time highs.

Now’s a great time to be invested.

Common Inflation Risks for Stock Investors & How to Protect Against Them

What to Expect When Investors Start Rushing Into the Market