Home » Investment Opportunities » The IoT Revolution Is Coming to Your Home

The IoT Revolution Is Coming to Your Home

In 1982, students at Carnegie Mellon University started what would become one of the most dynamic technologies of our time. They wanted to know the inventory level of a Coke machine on campus, so they installed microswitches that reported the number of cans in the machine as well as their temperature.

Not much was done with this technology until the 1990s, when shipping companies allowed customers to track their packages. And so began what we know as the Internet of Things (IoT).

The IoT has become an extremely hot topic over the past couple of years, and according to the chart below, it will become a $4 trillion industry over the next two to three years. 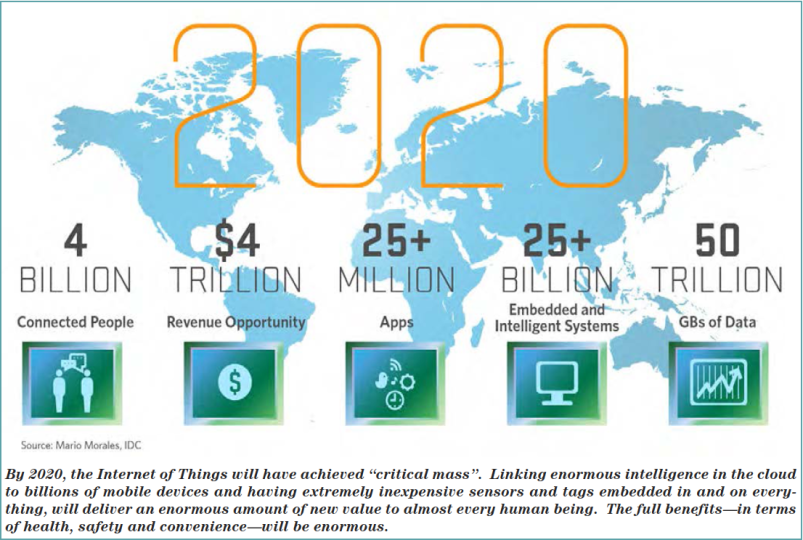 Simply put, the IoT is a network where items are connected and can communicate. A lot of popular IoT capabilities at the present time are ones that can be used in one’s own home, and the combination of these appliances can be used to form what is known as a smart home.

The product that really brought the smart home idea to life was Amazon’s Echo, which was released back in June 2015. The Echo keeps evolving, and it can now be used to connect to household appliances such as thermostats, ceiling fans, security systems, garage doors and more.

In addition to a physical object such as the Echo, a lot of smart home features can be controlled via phone apps, some simple examples being turning on your oven, scheduling your blinds to open and close at certain times throughout the day, and turning lights in your house on or off. There’s also a smart bed that will adjust its position based on how you sleep; it will even adjust itself to lessen its user’s snoring.

Apple Is No Longer a ‘Sure Thing’ Investment