I looked up at the frantic gas station clerk rushing over.

He snatched the pump from my hands and shoved his finger at a gas station across the street. His English ended at “no,” but I could understand what he was saying.

I was in Thailand, and had decided to rent a motorcycle to get around. Beyond almost killing myself learning how to drive on the other side of the road, I revealed my ignorance at the pump.

In Thailand, they have a lot more options for fuel. Gasoline, diesel, biofuel, natural gas … and liquid propane.

The Thai clerk saved me from trying to fill my gas tank with propane.

Soon, ships are going to have a lot more options at the pump, too.

The International Maritime Organization, the U.N.’s governing body for all things maritime, is forcing out the high-sulfur bunker fuel that ships ran on for the better part of a century.

Bunker fuel is like oil. It is so sludgy that it needs to be heated before it can be used.

There are a few options for shipowners.

I first wrote about this shift in May. At the time there were a lot of questions about which route the industry would take.

The data is beginning to show trends now.

There are approximately 60,000 ships in operation today. Shipowners ordered scrubber units for nearly 1,000. In contrast, Reuters reported only 125 LNG ships currently in use.

But don’t count LNG out yet.

Orders for LNG ships is on the rise, with an estimated 1% of all ships using it by 2020. By 2050, LNG could account for a third of all marine fuel use. 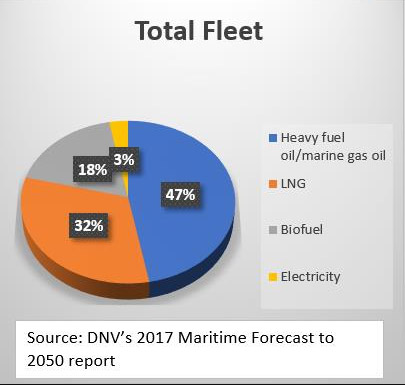 Shell is helping to build the LNG systems at the Gibraltar port. Cheniere operates an LNG export terminal along the Gulf of Mexico.

Here’s Why You Should Invest in Coal

Understanding Blockchain: Why It’s Still In The Infancy Stages