Someone Else’s Health Care Could Ruin Your Retirement

Have you ever noticed how many movies are about the little guy getting revenge against the big, bad corporation?

Whether it’s kid (The Lorax) or adult movies (Wall Street), Hollywood loves to bash big companies. The abiding message is that corporations are soulless, heartless machines that will do anything to make a buck … no matter the consequences for the rest of us.

The truth is (usually) a little different.

Most corporations are run by people who genuinely believe that their decisions are in everyone’s best interests. Even executives who believe in Ayn Rand-style individualism and ruthlessness trust that in the long run, everyone is better off that way.

Indeed, from the perspective of the modern corporate executive, raised in the “shareholder value” tradition, corporations do what impersonal market forces tell them to do, period. If that means other people lose out … well, c’est la vie.

There are big market forces at work in the U.S. economy today, and if you work for a big corporation, it threatens your retirement. It may be nothing personal … but it’s still gonna hurt if you don’t adjust accordingly.

Crowding Out Your Retirement

Over the last decade, escalating health care costs, historically low interest rates and an aging workforce have made employee benefit packages much more expensive for corporations.

Meanwhile, employees are dealing with their own financial stress. Baby boomers are behind on retirement savings. Millennials are trying to keep up with student loan debts. But sluggish wage growth makes both hard to achieve.

Consequently, many people worry about paying today’s bills and financing their retirement … and they are increasingly on their own in doing so.

Defined benefit plans have largely gone the way of the dodo bird.

None of the largest 10 U.S. corporations offer them anymore. Less than 7% of U.S. employees are in one. Everyone has moved on to defined contribution pensions and 401(k)s.

Something had to give.

At the same time, active health care expenditures for employees as a percentage of remuneration rose from 5.7% to 11.5% of the average pay packet.

The loser in that scissor movement? Your retirement benefits.

This wasn’t a case of evil corporations versus innocent employees … this was pure market forces at work. As health care costs go up, your retirement benefits go down. 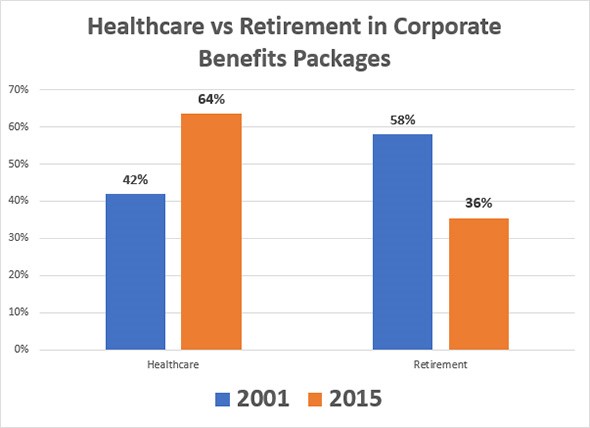 You Vs. the Market

Despite this shift, nearly 80% of U.S. employees say their company’s retirement program is the primary way they save for retirement … up from only 56% in 2010!

This is almost certainly due to poor wage and salary growth since the financial crisis. Many people don’t have the money to set aside in an individual retirement account (IRA) or other retirement vehicle … or at least, they think they don’t.

We know that Social Security is on the skids. What to do?

Here’s my list, all of which are covered in The Bauman Letter archives:

Mr. Market isn’t interested in your well-being. And even if they say they are, most employers aren’t either. They are interested in their bottom line.

You should be, too … because in this modern world, it’s entirely up to you.

There’s Still Time to Save Your Retirement

Government ‘Help’ Could Cost You Big in Retirement