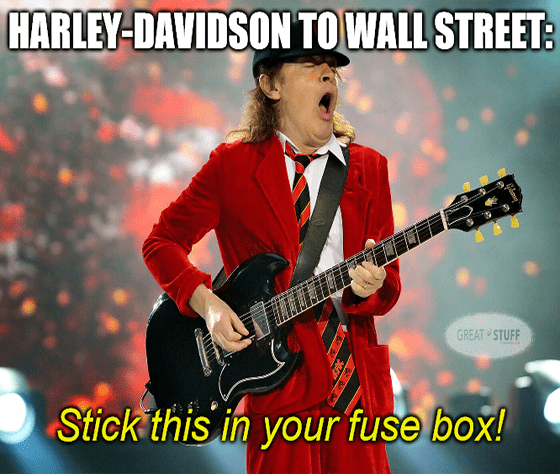 Great Ones, it’s time to get your motor runnin’ and head out on the highway. Harley-Davidson (NYSE: HOG) is looking for adventure, and electric motorbikes are coming our way!

Yeah, darlin’, Harley’s gonna make it happen. Take the world in a SPAC embrace. Sell LiveWire shares at once and explode into space…

Like a true nature’s child, Harley announced this morning that LiveWire — the company’s electric motorcycle division — will go public via a SPAC merger with AEA-Bridges Impact (NYSE: IMPX).

The deal values LiveWire, which will trade under the ticker symbol LVW, at $1.77 billion.

According to the terms of the merger, Harley-Davidson will retain about 74% of LiveWire’s stock, while AEA-Bridges Impact shareholders will own about 17%.

So, unless Harley lets loose with some shares, only about 17% of LVW stock is gonna hit the market. That’s a lot of control over a spun-off company. So much control that Harley-Davidson will continue to account for LiveWire’s results in its own quarterly filings for GAAP reporting reasons.

But then, this isn’t really a spinoff, Great Ones. Let’s call it what it is: an electric vehicle (EV) cash grab.

I mean, EV companies have been ridiculously hot on Wall Street for the past two years. We saw Tesla (Nasdaq: TSLA) rise to a valuation higher than literally all other traditional vehicle makers on the planet — combined. We also saw Rivian (Nasdaq: RIVN) go public last month with a higher valuation than GM and Ford combined.

Don’t get me wrong: I’m not bashing Harley-Davidson for taking advantage of Wall Street’s EV hype to grab some cash and make a stash. I’m just surprised it took Harley this long. The company had to know that LiveWire was gonna set this town on fire.

After all, EVs are hotter than a rollin’ dice, and investing in them can send you to heaven or take you to hell. I ain’t foolin’, can’t you tell?

Just how many songs are you gonna reference today, Mr. Great Stuff? 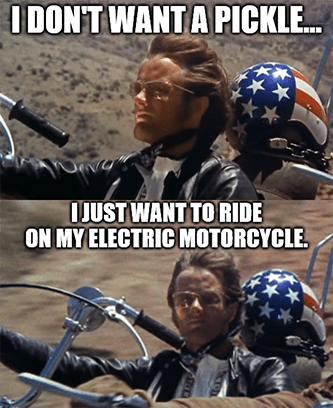 The bottom line here is that Harley-Davidson — the most storied motorcycle brand in the world — is finally taking EVs seriously.

This is a critical move by Harley to attract attention from a younger generation of bikers … doubly so, as Harley’s key demographic joins Peter Fonda where the road goes on forever, and the party never ends.

It’s not that I don’t like Harleys, it’s just that I didn’t see where a combustion-engine vehicle, popular with the culture of a different time, was gonna fit in the new electric normal.

With LiveWire, that future is considerably more interesting. I’ll be waiting for LVW stock to hit the Street, and then we’ll see if LiveWire is truly born to be wild.

Cooler Than A Harley On Ice

One former Tesla employee just released a brand-new innovation promising to make every EV out there instantly obsolete.

And it goes beyond just EVs: His new technology is rolling out to power 50 million homes and businesses, setting up a new market 10X bigger than EVs — and you can buy in right away. 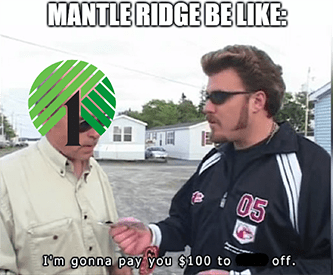 When activist investor Mantle Ridge stepped up and bought more than 5% of Dollar Tree’s (Nasdaq: DLTR) underperforming shares, it was supposed to help the discount retailer reframe its pricing strategy and ignite a feeding frenzy for DLTR stock.

In part, that’s exactly what Mantle Ridge has done. Remember when Dollar Tree announced it would hike the prices of certain items to $1.25 instead of just a buck? Yeah … turns out, that oh-so-revolutionary idea didn’t come from Dollar Tree’s OG board members.

But now Mantle Ridge has come up with an even more radical plan to shake money from the Dollar Tree: replace the company’s entire board of directors and hire nemesis Richard Dreiling to help fill in the gaps.

You know Dreiling — the guy who happens to be the former CEO of rival retailer Dollar General? That guy. Ask any active Dollar Tree board member how they feel about this plan, and they’ll give you a nice long rant about how Mantle Ridge is being “unwarrantedly aggressive and hostile” in its requests:

Mantle Ridge’s overreach in seeking to replace our full board with its own hand-picked slate — despite having no ideas or plans to improve on our business operations — is not justified, nor would it be in the best interest of Dollar Tree shareholders.

Truth be told, I’m siding with Dollar Tree on this one. I mean, it’s all well and good to bring new blood into the company — especially someone with a proven track record of success, like Dreiling.

But to replace all the people who know Dollar Tree’s business inside and out, without any real business strategy beyond “fire everyone at the top?” That’s a bit extreme for my liking … and it looks like Wall Street agrees. DLTR stock is already down almost 2% on the day. 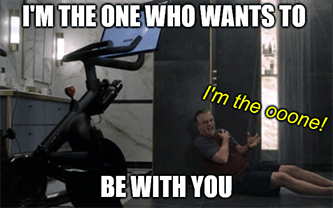 I never thought I’d see the day when Peloton (Nasdaq: PTON) poked fun at the fact that multiple people have been injured using its overpriced exercise equipment. And yet, here we are…

It all started with HBO’s latest Sex and the City revival episode, titled “And Just Like That.” In the episode, a key character named Mr. Big has a heart attack after a 45-minute workout on one of Peloton’s exercise bikes.

Considering Peloton has a history of people getting injured — and even dying — using its machinery, that parallel didn’t sit well with PTON investors, who sent the bike peddler’s stock to a 19-month low last week after the episode aired.

Peloton — which approved the show’s use of its bike but didn’t realize how it would be used — clapped back and said that Mr. Big’s unhealthy lifestyle choices caused his death and not the company’s bike.

Then, this past Sunday, Peloton released an ad featuring Chris Noth (the actor who plays Mr. Big), along with the message: “And just like that … he’s alive.”

As silly as all this sounds, Peloton’s stock benefitted from the company’s quick thinking — and its even faster commercial turnaround time — and has since made back nearly all its prior losses.

While I still find it ridiculous that Peloton needed to clarify the context of a fictional character’s death … and I’m cautious about the company’s ongoing safety concerns … there’s no doubt this viral video puts Peloton back on the mental map (and maybe even a few people’s Christmas lists).

Considering Peloton had nothing going for it until just a few days ago, this happy accident could bode well for PTON shareholders … at least until the next Peloton treadmill tragedy makes headlines.

Gone: Pfizer Steps Into The Arena 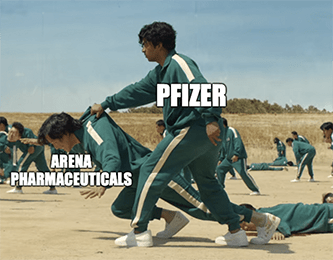 An Israeli study just found that Pfizer-BioNTech’s three-course shot is effective in protecting against Omicron. And if Pfizer didn’t already have enough going for it this morning, the Big Pharma giant had to go and announce the acquisition of onetime Great Stuff Pick Arena Pharmaceuticals (Nasdaq: ARNA) too.

Pfizer plans to acquire Arena in the first half of 2022 at $100 per share in an all-cash deal. For all you math-averse Great Ones out there, that’s about $6.7 billion that Pfizer will have to pony up.

Arena, which has several treatments for gastroenterology, dermatology and cardiology in its pipeline — ooh, I see you’re using your big boy words today — will help Pfizer target more patients with stomach issues like Crohn’s disease and ulcerative colitis.

In fact, Arena’s late-stage ulcerative colitis treatment, etrasimod, is one of the main reasons Pfizer came calling: “The proposed acquisition of Arena complements our capabilities and expertise in inflammation and immunology,” said Pfizer Executive Mike Gladstone.

Both PFE and BioNTech (Nasdaq: BNTX) are up modestly following today’s positive vaccine news, but Pfizer is feeling some pressure pending its Arena acquisition. ($6.7 billion isn’t exactly chump change, after all, even in the land of Big Pharma.)

Meanwhile, Arena investors are enjoying a massive 82% rally today. Now, if only I had a crystal ball when I sold this stock back in May for an 11% gain … but alas, that’s just the way the pharma game goes, sometimes.

A Monday afternoon pick-me-up? From the lithium market, of all places? Well, don’t mind if I do.

Oh boy, now Mr. Great Stuff is gonna break out the Nirvana lyrics with “Lithium,” just like every other time lithium prices come up. Where are my antidepressants…

Hey now, how do you know I wasn’t going for Evanescence’s “Lithium?” I just want to know: Who’s Evan, and who the heck wants his essence? Ew…

OK, I concede: The world needs some new lithium song lyrics to riff off of — not as much as we need battery-grade lithium itself, but still.

As the rush to churn out EVs intensifies, so too does the rush to produce lithium, which goes in the batteries powering those EVs. 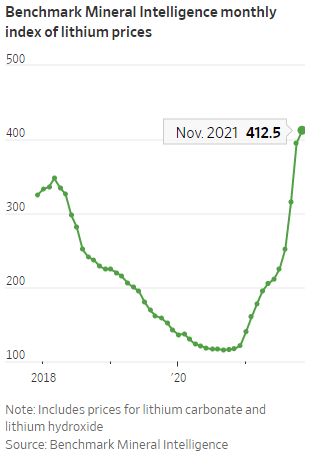 If you couldn’t tell by the great glimmering lithium rally, demand for the stuff is through the EV roof, almost as if we can’t get enough lithium to meet current EV production demands.

Why? Because from Cybertrucks to electric Harleys, lithium is your lifeline. Your live wire, if you will. Lithium’s got what EVs crave — electrolytes!

Wait, I thought you were the head hype man for hydrogen power — what gives?

Time to catch up on your Great Stuff! Sheesh.

But just like I said last week, transitioning vehicles away from carbon-based fuels is exactly that — a transition. While certain outspoken EV market voices denounce hydrogen power altogether … other non-Tesla EV makers are using both traditional batteries and hydrogen fuel cells in their designs.

So, we’re keeping our investing hands in both cookie jars for the time being. We dove deeper into the lithium-mining rabbit hole — not a euphemism, I swear — roughly two months ago. Great Stuff Picks recommended Albemarle (NYSE: ALB), which just so happens to be the world’s biggest, baddest lithium producer.

Coincidence? Not one iota.

Albemarle’s lithium goes straight to the world’s biggest battery makers: Panasonic, Samsung SDI and Corning, BYD, CATL and LG Energy Solutions. 87% of EV batteries come from these six companies, meaning Albemarle controls the flow of the spice — erm, the lithium, for much of the EV market.

Rising lithium prices are a boon to Albemarle’s bottom line — and your pockets too if you bought ALB shares back when Great Stuff recommended them in October. As you would’ve read in our instructions before buying ALB shares — ahem — ALB has been volatile in recent times because, well, what hasn’t?

As we speak (or type), ALB dipped down to its 50-day moving average amid today’s sell-off. Though, for the time being, ALB’s uptrend is still clear — and its future in the EV-powering lithium market is even clearer.

The road to energy storage domination won’t be easy ridin’ … but ALB is ridin’ right along all the same. I mean, Great Stuff Picks readers are already up more than 15% on ALB stock. How’s that for lighting your candles in a daze?

But, if investing in lithium producers themselves isn’t your cup of fresh EV tea … building a better battery should be: One new technology could cut the cost of a battery in half … making it much more affordable than current EVs.

Then, let me know your thoughts at GreatStuffToday@BanyanHill.com. In the meantime, here’s where you can find our other junk — erm, I mean where you can check out some more Greatness: 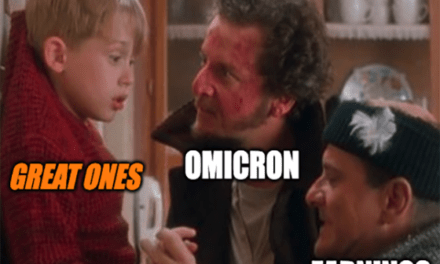 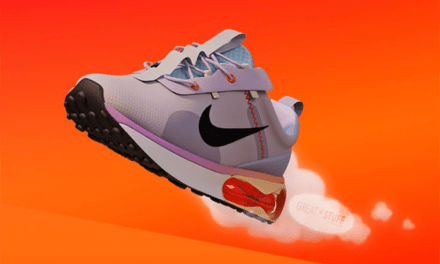 Nike’s Meta-Morphosis, High Flying Hydrogen & Match Me If You Can