Home » Great Stuff » Nike’s Meta-Morphosis, High Flying Hydrogen & Match Me If You Can

Nike’s Meta-Morphosis, High Flying Hydrogen & Match Me If You Can 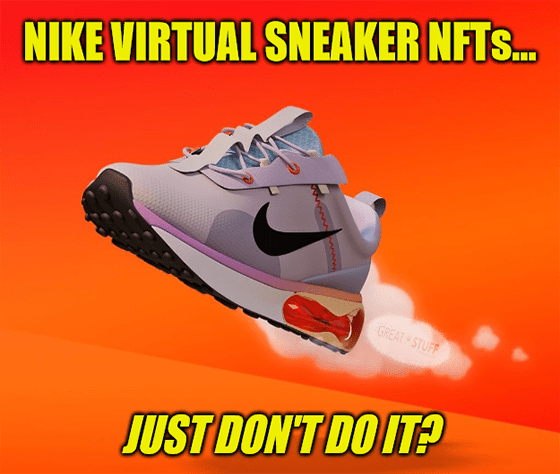 Great Ones, you can thank Nike (NYSE: NKE) for that alphabet soup in the headline up there.

This morning, Nike announced that it bought virtual sneaker company RTFKT for an undisclosed amount of real-world cash.

I can already hear you now: “WTF is an RTFKT?” At least you’ve got one acronym down.

RTFKT is a very eclectic, creator led organisation. RTFKT uses the latest in game engines, NFT , blockchain authentication and augmented reality, combined with manufacturing expertise to create one of a kind sneakers and digital artifacts.

RTFKT is known to be creating viral sneaker designs, memes and collectible exclusives. RTFKT has maintained a reputation of being more than a little ahead of the cutting edge of technology, a rep that has many mystified, as they would appear to lack the resources and manpower to rival giants in terms of research and development in the birth of digital fashion.

Basically, RTFKT designs, makes and sells virtual assets, such as sneakers, clothing, collectibles and memes — all of which are nonfungible tokens, or NFTs. These virtual assets run on blockchain technology and can be used in the metaverse.

What, you didn’t think you’d just automatically get all the drip — that’s “cool clothing style,” for those non-Gen Zer’s out there — you wanted in the metaverse like Neo, did you?

That’s not very capitalist of you.

No, you’re going to have to buy all those cool clothes for your stylin’ avatar. And now you can probably see why Nike bought RTFKT in the first place.

But where is Nike gonna sell its newly acquired designer digital shoes? Well, it already has a metaverse store, located in Roblox (NYSE: RBLX) of all places.

Side Note: If you’re thinking about investing in Roblox, you need to see these two videos:

And that’s all I’m gonna say about that … other than I’m probably never buying RBLX stock. But that’s just like my opinion, man.

So, Nike has a storefront on Roblox where it can peddle its designer digital digs. But was buying RTFKT really worth it? I mean, how much money can you make designing digital images on a screen?

Quite a lot, it turns out — which you already know if you watched the two videos above. Back in March, RTFKT sold 621 pairs of digital sneakers designed by online artist Fewocious — please no “UwU” — for $3.1 million.

That’s about five grand per pixelated pair of penny loafers. And that was without the Roblox storefront or the Nike brand backing. In other words, buying RTFKT looks like a very smart move for Nike in its play to dominate the metaverse clothing and collectible shoe market.

But, Great Ones, I have some reservations about this whole thing.

Sigh … of course you do. 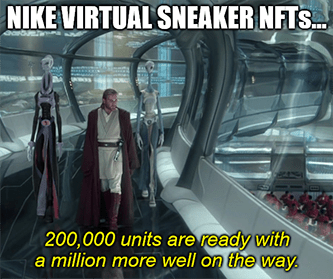 I wouldn’t be doing my job if I didn’t have reservations. You see, I didn’t think the metaverse had grown big enough to necessitate its own body-part-specific clothing line.

Where can you “wear” these RTFKT shoes? I mean, other than inside Roblox.

Are RTFKT shoes transportable to other virtual worlds? What’s to stop me from copying them? Sure, the NFT says someone “owns” them, but it’s just a digital image that I can easily clone. How are you gonna enforce that NFT?

And here’s another rabbit hole for you to go down: Y’all may or may not remember the early days of the internet browser wars. Back then, certain sites would only load on certain browsers. I argue that the metaverse is gonna be the same way until someone comes up with a technical standard across those virtual worlds.

Imagine if you’d bought those RTFKT sneakers … but they only worked with “Netscape Virtual World Browser.” But then that browser goes out of business because “Opera Virtual World Browser” is now the new hotness, or another company bundles its virtual browser with its hardware? I’m looking at you, Microsoft.

Where are your snazzy digital shoes, then?

The bottom line here, Great Ones, is that until virtual sneakers can walk across virtual world boundaries, I really don’t see the point here.

And when it comes to the metaverse, I feel like I’m being promised flying cars again.

Editor’s Note: Imagine All The Data!

The metaverse will churn out immeasurable amounts of data — and yes, unfortunately, some of that data will be devoted to virtual Nikes. Whatever makes it to the metaverse, we’ll need more effective methods of storing and analyzing that data.

Here’s the thing: We pretty much know nothing about most of the data in the world. In fact, 90% of the data that exists in the digital universe is “unstructured.” But thanks to companies like one small California firm … a refining process has come to light.

One small company with over 600 patents has an iron grip on this explosive mega trend.

Good: Meatless Macs Are Back 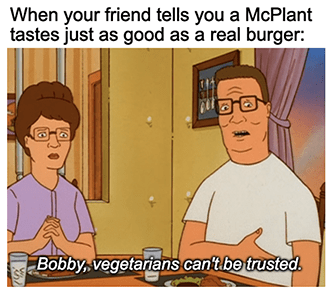 All right, technically meatless Macs never left. But considering McDonald’s (NYSE: MCD) has been rolling out its Beyond Meat (Nasdaq: BYND) McPlant patties at a glacial pace — at least here in the U.S. — you’ve probably been hard-pressed to sample one of these suckers.

In fact, only eight McDonald’s restaurants in the entire country have added the McPlant to their menus so far — and only as part of a “limited trial run” while McDonald’s tests new consumer markets.

Who knew these alt-meat monstrosities would be so exclusive? Are McDonald’s employees going ‘round back and hand-packing their own patties or something? Is the McPlant dipped in gold before it’s tossed into the deep fryer? Inquiring minds want to know…

Either way, investment bank Piper Sandler thinks the McPlant is about to get a whole lot less exclusive and could undergo a nationwide rollout in less than three months. It even upgraded Beyond Meat to neutral from underweight in anticipation of the McPlant becoming a full-time menu item and upped its price target on BYND stock to $64 from $61.

Assuming McDonald’s finally stops clowning around and takes the McPlant rollout seriously, this could be a huge boon to Beyond Meat’s stock (which has been in the red for a good part of the year).

Unsurprisingly, the minute Wall Street caught wind of these rumors, it went to bat for Beyond Meat and sent its stock trading 7% higher on the day. Let’s just hope there’s some meat — plant-based or otherwise — to this story, or BYND investors might find grill marks miring their portfolios. 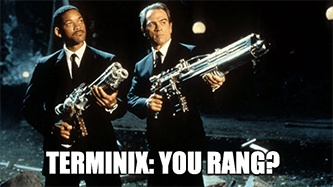 We don’t often talk about insect and all-around pest patroller Terminix (NYSE: TMX) in Great Stuff because, frankly, there’s not much to say about the bug-begone boss.

First you have insects roaming ‘round … then you don’t. Magic.

I’m not a fan of playing Terminator for basement-dwelling creepy crawlies, personally. Call up your pals at Terminix and they’ll do the dirty deeds for you — though whether they’re done dirt-cheap or not, I can’t rightly say.

But what happens when Terminix, the hunter … becomes the hunted?

I’m pretty sure you couldn’t name a pest control company that stateside. People’d get confused.

Anyway, as part of the acquisition, Terminix will get $1.3 billion in cash and 643.3 million new Rentokil initial shares. The combined company plans to save $150 million over the next three years, thanks to everyone’s favorite corporate-generated bs phrase: merger-related cost synergies!

Terminix investors were overjoyed with the news — I mean, who doesn’t love synergy? — and sent TMX shares soaring 28% this morning.

Best: How The Hydrogen-Powered Tides Have Turned 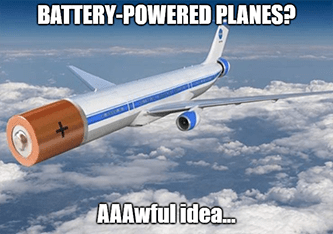 With stocks like Plug Power (Nasdaq: PLUG) and Hyzon Motors (Nasdaq: HYZN) rounding out our Great Stuff Picks portfolio, it’s no secret that I’m here for the hydrogen-powered hooplas … especially when it comes to air and ground transportation.

Wait a second… Did you just allude to “hydrogen” and “flying” in the same sentence? Haven’t you ever heard of the Hindenburg?!

Of course. I’m well-versed in 1930s disasters, thanks to the flurry of emails that hit our inbox literally every. Single. Time. That we bring up airborne hydrogen power. So, let’s put those 90-year-old prejudices aside for a moment…

Because there’s no sustainable way to make battery-powered planes work for the future of green air transportation. I mean, think about it. Batteries are ridiculously too heavy to be cleared for most air travel.

The answer to this problem is hydrogen. It’s always been hydrogen. And now there’s more evidence to prove it…

In addition to United’s equity stake in ZeroAvia, the airliner will buy up to 100 of ZeroAvia’s ZA2000-RJ engines, which are zero-emission and 100% hydrogen-electric. According to United, the company will use these engines to help power its existing regional fleet of planes.

When asked about the partnership, United CEO Scott Kirby said: “[ZeroAvia’s engines] are one of the most promising paths to zero-emission air travel for smaller aircraft.” Translation?  Hydrogen power is here to stay.

Man, I love being right.

Out there in the cold, getting lonely, getting old … have you tried online dating?

Yes, I am serious. And sorry for calling you old. See, love in the time of Covid-19 is rather difficult (Gabriel García Márquez would’ve had a field day).

‘Twas the best of times and worst of times for online dating companies … but Match Group (Nasdaq: MTCH) isn’t giving in without a fight.

But while companies like Match Group, Tinder, et al. once believed that AI was the end-all-be-all of dating apps, that opinion is starting to sour faster than a blind date. Turns out, AI was looking for love in all the wrong places for more than a few soulmate seekers.

In answer, Match is once again going old school and using humans. What a novel idea…

We’re not going to solely rely on algorithms—we want a human touch to help bring that human element and encourage that intimacy even further. 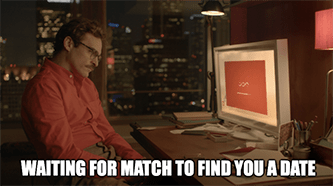 Now, I know what you’re thinking. “Why would I pay for a stranger’s dating advice when I can just call my kooky Aunt Karen and do the opposite of what she suggests?” Well, that’s called innovation. And it’s just $5 a week.

No more will you have your ear against the wall, waiting for someone to call out: “Will you match with me?” Your personal matchmaker will use conversation context clues that AI systems just can’t judge well enough when pairing potential partners…

Sure, AI is everywhere, but it’s not foolproof. After all, AI is only as smart as the humans programming it. And we know that programmers are so incredibly knowledgeable about relationships…

What’s more, true “learning” AI isn’t really a thing yet. Also, humans are still the best at “feeling” out human-generated dating profiles — how does one program a vibe check, exactly? Humans were bound to enter (or re-enter) the matchmaking picture eventually.

Match is covering all its virtual bases here, giving users across its platforms as many ways to connect as possible. Granted, they still can’t match you up by comparing your Netflix binge history or Spotify taste. And where’s my gacha-style dating app, Match? C’mon…

Get yourself some new NFT Nikes for your first matchmaking date, and you’ll be off and virtually running. Just like MTCH shares, which were up a whole 2% after unveiling its matchmaking plans … until today’s volatility swiped all the day’s gains away, and then some.

(For more adventures in the world of AI investing, click right here!)

What are your thoughts on online dating, matchmaking, hydrogen planes and virtual sneakers?

Let me know your thoughts at GreatStuffToday@BanyanHill.com. We’d love to hear from you! In the meantime, here’s where else you can find us: 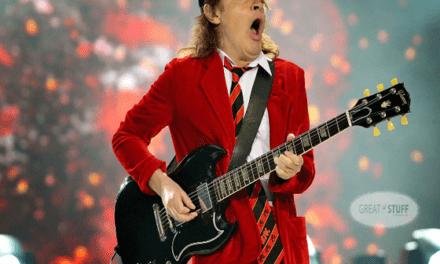 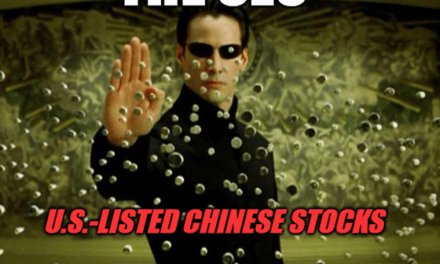 Nio’s Not The One, YouTube’s DISphoria & Speaking Meta-phorically