2 Charts and a Punch in the Face

I’m going to show you two charts. You can decide what to do. If you choose wrongly, a year from now, you’re going to want to punch yourself in the face.

First, let me set the table. On Wednesday, the notes of the most recent Federal Open Market Committee meeting were released. They showed officials thought the economy was getting stronger. Federal Reserve officials also mused aloud that more rate hikes were likely.

The Fed has already hinted at three rate hikes this year.

Higher rates are expected to weigh on commodities generally and gold in particular. That’s because commodities pay no dividends. They have no yield, and the yield on bonds will likely be going higher.

So, this is the kind of news that should have sent commodities lower. It should have meant that gold, which had its worst day in over a year on Tuesday, should have finished Wednesday by going “bang-oof-ow-splat!” Like a feeble old granny falling down the steps.

Well, Granny is doing her yoga. Because gold actually rallied on the news. As did commodities generally.

What-the-wha? Why did that happen?

First, here’s a chart of the CRB Index. This index tracks a basket of 19 commodities. It’s energy-heavy — 33% by weight. But it is stuffed with everything from cocoa to copper, hogs to gold. 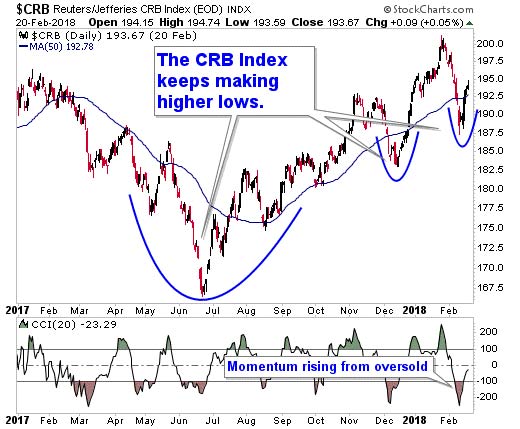 You can see the CRB Index is making higher lows. That’s bullish!

I first showed you a version of this chart back in early November. Then, I was calling for a “global reflation trade.” But one vital ingredient was missing: inflation. You need inflation for the commodities engine to spark and start firing on all cylinders.

Well, guess what we got now? Here’s a chart of the U.S. Consumer Price Index year over year…

You can see inflation sparked back to life at the end of 2015 — which coincided with the start of the new commodity bull market. Inflation made fools of us all by doing a “bumpy plateau” throughout 2016, then actually falling into 2017.

But now it’s clear that inflation is coming back.

This time, it is being driven by tightening commodity supplies as the global economy shifts into higher gear.

Add in rising wages: The U.S. Employment Cost Index rose 0.6% in the fourth quarter. That lifted the year-on-year increase to 2.6%. That’s the largest gain since the first quarter of 2015.

A hotter global economy and rising wages? That’s what you need to go vroom-vroom!

A Hedge Against Higher Inflation

So, let’s get back to my question. When the Fed hinted at more rate hikes, why didn’t commodities sell off?

The reason is that the market knows the Fed is too timid to raise interest rates fast enough to keep pace with inflation. Real interest rates — the benchmark rate minus inflation — are close to flat and could tip negative if inflation spikes.

And guess what does really well when real interest rates are negative? Gold. Silver. Other commodities.

That’s because inflation eats away at the value of dollars. And commodities are priced in dollars.

So, look at those two charts. Commodity prices are zigzagging higher. Interest rates are heating up.

Ask yourself what you should be buying to hedge against higher inflation.

If the answer isn’t “commodities,” punch yourself in the face.

Maybe you won’t punch yourself today. But if you pass on this opportunity when commodities are still cheap, well … you’ll probably punch yourself later.

The better move would be to give inflation the ol’ rope-a-dope. Bob and weave. Buy commodities on pullbacks, and swing for the big scores.

Italian Stocks Won’t Get a Boost From the Election