In 1969, the first person walked on the moon and ignited a nationwide space fever! NASA’s Apollo 11 mission changed the world and expanded our wildest dreams of what was possible for space travel.

Now, over 50 years later, space is BACK!

But this time, the new space economy has private space flight in mind.Commercial space travel is in its early stages, and that’s why now is the best time to invest in this growing America 2.0 mega trend.

What Is the New Space Economy?

The space race of decades past laid the foundation for what Paul Mampilly’s calling the new space economy — or space 2.0.

Orbiting and landing on the moon and sending a rover to Mars are incredible innovations.

But now we’re looking at new space achievements — from Internet access in space to space tourism to Mars.

The new space economy is the interweaving of different companies and mega trends working together to make private space tourism, more accessible Internet and even colonization of Mars a reality in the coming decades.

From Space X to Blue Origin to Virgin Galactic, there are so many incredible innovations happening every day that’s bringing us one step closer to making space travel as commonplace as taking a bus or flying in a plane.

One important branch of the new space economy is space Internet. Starlink, a branch of SpaceX, uses state-of-the-art satellites to provide Internet access to areas that would otherwise be disconnected.

If you live in a rural or remote location with spotty internet access, this announcement is tailored-made for you.

Then there’s space tourism, which is already underway thanks to the flagship missions of Virgin Galactic, Space X’s Inspiration4 and Blue Origin in mid-2021.

The goal of these flights is ultimately to open the door for people of all walks of life to travel into space, an experience long reserved for only NASA astronauts.

Finally, human colonization of Mars has long been thought to be nothing more than science fiction, but it’s coming closer to reality thanks to the new space economy.With robotics, artificial intelligence and 3D printing all making massive leaps forward in recent years, plans to build a colony on Mars using these innovations seem more possible than ever.

There’s so much to look forward to with the growing new space economy, and there’s never been a better time than now to get in on all the latest space innovations.

The new space economy is driven by many factors across all of the mega trends that make up America 2.0. A few examples include:

All these examples and more are driving the new space industry toward the future of America 2.0 and the next phase of space travel!

What Is the New Space Industry’s Global Market Projections?

According to a Morgan Stanley report, the global space industry is projected to generate revenue of more than $1 trillion by 2040 — up from $350 billion today. 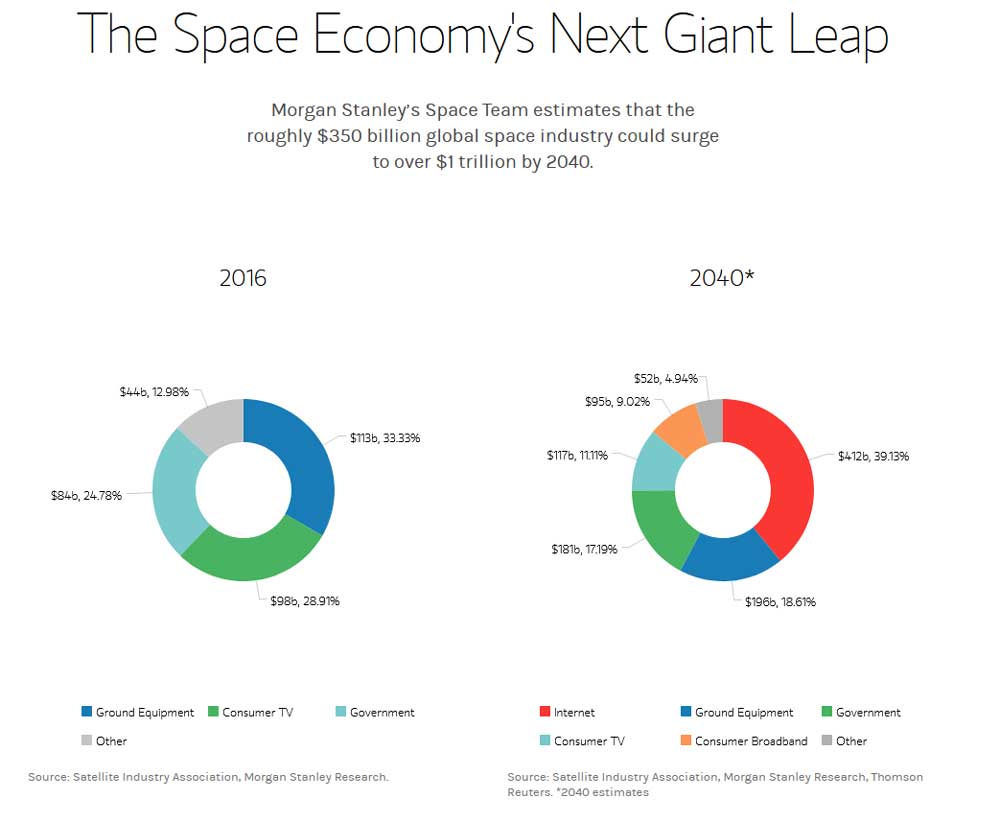 To learn more about how space and other mega trends fueling America 2.0 will transform modern life and where the best investment opportunities lie, click here.