Edge Is What Separates the Master Traders from the Patsies 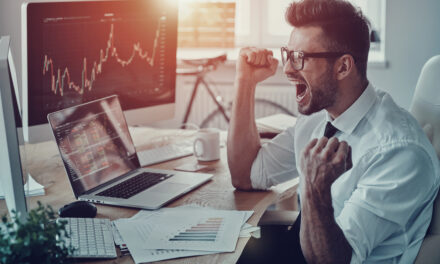 Warren Buffett wrote in 1987: “[I]f you aren’t certain that you understand and can value your business far better than Mr. Market, you don’t belong in the game.

“As they say in poker, ‘If you’ve been in the game 30 minutes and you don’t know who the patsy is, you’re the patsy.’”

While they don’t want to hear it, many traders are patsies.

Why? Because they have no edge.

Edge is something all successful traders have. It’s the quality that separates them from most traders. The majority that wind up failing.

An edge should be easy to explain and understand. It can be based on complex patterns, but must be simple enough to describe in a few sentences.

If you can’t explain how your strategy helps you win, you shouldn’t be trading.

Poor traders can’t explain their edge. The truth is, many never even think about what their edge is. If they even have it to begin with.

Here’s why I bring this up…

The Sharpest Edge I’ve Ever Seen

Chad Shoop, co-editor here at True Options Masters, is such a success because he spent years defining his edge.

His service Pure Income, one of the top-performing options advisories in our entire network, is proof that knowing your edge can be profitable.

Chad wins on about 92% of his trades because he developed an understanding of market action and market structure.

Let’s break that down.

Market action is what every trader follows. Technical indicators are often used to identify the direction of the trend or to find the likely direction of a short-term price move.

Market structure, though, is where Chad developed a level of knowledge that few traders have.

Like many traders, Chad looks for stocks that are likely to go up in price. Many traders then buy the stock. Some buy a call option to benefit from the expected price move.

Sometimes this works, sometimes it doesn’t. Buying options means you have to be right on direction, and right on timing. And your risk is always 100% of your starting stake.

And he learned that selling a put option is another, more consistent way to benefit from a price increase.

But he also knew that you can only sell an option if there is someone willing to buy that exact option.

So, Chad dug into market structure and learned how options markets function.

He studied put-call parity, market making, and options pricing models. It was a lot to take in, but he understood that if he simply knew what everyone else knew about the market, he wouldn’t have an edge.

He had to learn what few traders could even begin to understand.

What Chad discovered is that market makers, the firms who stand on the floor of the exchange to facilitate trading, were using high-frequency trading algorithms and payment for order flow.

Chad saw that he could essentially sneak into their processes and generate profits. That was his edge.

It’s a complex process, far too complex to dig into here.

But Chad’s edge is that he found a way to benefit from high-frequency trading. He’s used this edge to post a 95% win rate in his options selling strategy in Pure Income. Results like this are only possible with the level of edge Chad has.

If this sounds like something you could use for your own trading account, I have great news.

Chad’s about to put on a 3-day training session, completely free, where he’ll do a deep dive on this strategy and show you how it works.

He’s said that anyone with $10,000 in their brokerage account can come to these sessions, and learn how to extract an extra $1,000 from the market using his options selling technique.

It’s one of the most consistent income opportunities one can exploit using options. It’s a winner, no matter the market environment.

If you’re not using this strategy now, you have the opportunity to learn about it from a bona fide master. Don’t miss it.

Sign up for free here, but don’t delay. Sign-ups close in the next few days, and after that, you won’t be able to access it.

Chart of the Day:
A Big Breakout in…
Japanese Stocks? 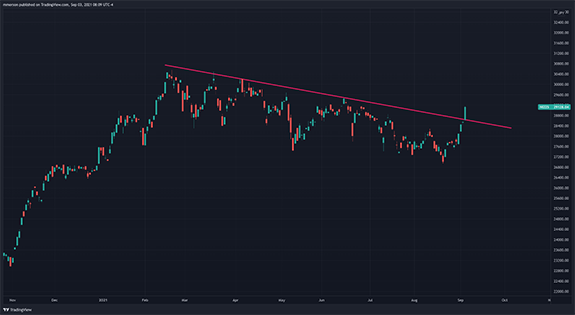 The Nikkei 225 — essentially the Japanese S&P 500 — rallied nearly 2% in yesterday’s session. This bucks a long downtrend, which has seen the index mark lower highs and lower lows since February. All while U.S. stocks have torn higher.

This move might have to do with Japanese Prime Minister Yoshihide Suga stepping down after just one year in office, due to his professed mishandling of the COVID-19 pandemic.

Beyond that, though, there’s real technical value in this breakout. If the Nikkei 225 comes back to retest the former falling resistance line as support, the downtrend in Japanese stocks could definitively change, at least for the short term.

And that as of December, a cool $434 billion worth of Japanese stocks were owned by… the Bank of Japan.

In other words, if you’re going to trade this move, tread lightly. Japanese stocks don’t exactly have a glowing track record.

Should one want to, options on the iShares MSCI Japan ETF (NYSEARCA: EWJ) would be how I do it. 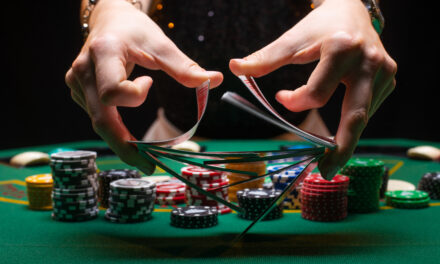 This Options Strategy Lets You Be The Casino, and Generate Instant Cash 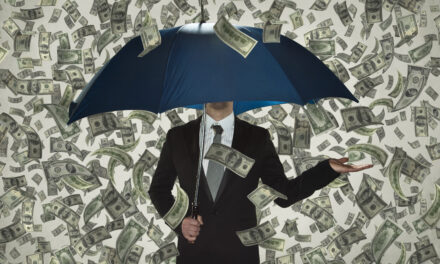