Home » Investing » Commodities » Precious Metals » Did Everyone Give up on Driving Cars?

Did Everyone Give up on Driving Cars?

If you looked at the price of palladium recently, you’d see something really weird.

The metal has fallen down the stairs. It’s nearly 14% off highs it hit in January.

This is another victim of the Trump trade wars. But unlike some others, the market is wrong on this, and you can profit. 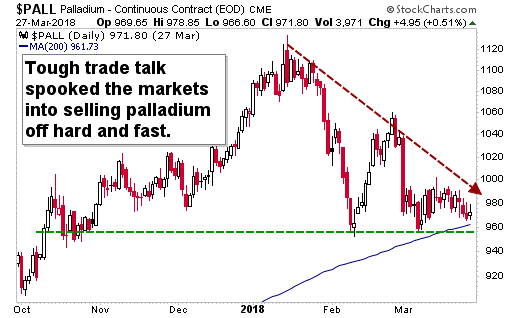 Ouch! You can see that palladium fell hard from January to February. It tried to pick itself up … then got smacked down again.

But let’s look at the bullish side. Support from last year is holding. And it’s right around the rising 200-day moving average, the blue line.

In fact, this is a great place for palladium to rally.

The Main Source of Demand

So will palladium rally? Yes, unless China and the rest of the world are giving up driving cars.

By that, I mean catalytic converters are the main source (75%) of demand for palladium.

I often talk about the electric vehicle (EV) mega trend and the rising number of EVs on the road. And sure, that’s shifting into high gear. But it’s within the context of a much larger trend toward many more cars on the road.

And for the next couple decades, the majority of those cars will run on internal combustion engines.

EVs had a mere 1.6% share of the market this year. By 2025, even optimistic estimates put EV penetration at 12%. A big surge, sure. But most cars will still run on internal combustion engines, and need catalytic converters with palladium.

Meanwhile, researchers at Bernstein expect the number of cars on the road worldwide to nearly double from 2016 to 2040. To rise from about 1.2 billion to 2 billion.

Why? Bernstein said it expects most of this growth in cars and trucks to take place in emerging markets like China and India. By 2040, the global population is projected to rise by another two billion people to 9.2 billion.

That’s the demand side. On the supply side, global inventories of palladium have shrunk for four years in a row.

Citigroup says supply will fall short of demand by another 835,000 ounces this year. And Morgan Stanley says palladium production will lag consumption until at least 2022.

After all this, why the heck is palladium down?

Because, as I said earlier, investors fear that imported cars could get hit by tariffs from one side or the other in the trade war President Donald Trump seems determined to start with our trading partners.

The Big Trend for Cars Will Not Be Denied

Mind you, I’m not saying Trump is wrong to be angry. China in particular has been robbing America blind of its intellectual property, and uses state-sponsored mercantilism to flood markets with cheap goods.

But do you think Trump will really hurt the American auto industry? Heck, he might help them out with these tariffs.

And globally, auto demand might hit a bump if tariffs go higher. But the big trend will not be denied.

That means the pullback in palladium is a buying opportunity. And with all the talk of a supply/demand squeeze, it could be one of the best opportunities of the year.

The easy way to play it is through the ETFS Physical Palladium Shares Fund (NYSE: PALL). It tracks the price of palladium pretty closely. It has an expense ratio of 0.6%, which is pretty cheap. And it’s liquid enough to trade easily.

Do what works for you. But palladium will chug along in low gear for only so long. The next leg of the supply/demand squeeze is coming. And you know this metal will shift into higher gear.

A Silver Video Straight From the Horse’s Mouth

Markets Have You Worried? Buy Gold