Demand for Renewable Energy Skyrockets Around the Globe

When my husband and I moved from Wisconsin to South Florida, it was January. We were just grateful to escape the snow, ice and bitterly cold temperatures. In South Florida, there was no need for heavy blankets, layers of clothes or even the furnace pouring out warm air.

But that easy sigh of relief changed when we entered our first summer months and it suddenly felt as if we were living on the surface of the sun. The air conditioner was cranked up, and you tried to avoid going outside out of fear of melting into the sidewalk.

The high energy bill that I escaped during the winter months came roaring back during the summer.

And my family isn’t the only one increasing our energy usage.

While the balance of energy that we are using might have shifted slightly, where we are now getting that energy has changed dramatically over the years, and that is creating an incredible opportunity for investors…

A New Source of Power

Our energy demands grow with each passing year. Every new gadget and device has a battery that needs to be charged. More computers, laptops, tablets, machinery and robots to keep businesses running are all sucking up energy. And naturally, as we head into those scorching summer months, the air conditioning is on full blast.

But the globe is turning away from the traditional sources of energy — such as coal, natural gas, oil and even nuclear — to add more renewable power.

In fact, the U.S. Energy Information Administration (EIA) reported that for the first time since 1984, renewable energy provided more power than nuclear in March and April of this year. Nuclear generation has actually fallen to its lowest level since 2014, and net generation has been relatively flat since the late ‘90s.

Few nuclear power plants are coming online while a growing number of older plants are starting to be retired.

On the other hand, more than 60% of all utility-scale electricity that came online in 2016 was either wind or solar power.

Part of the growing allure of renewable energy is the fact that the cost of construction for more renewable power plant types fell from 2013 through 2015, according to the EIA. 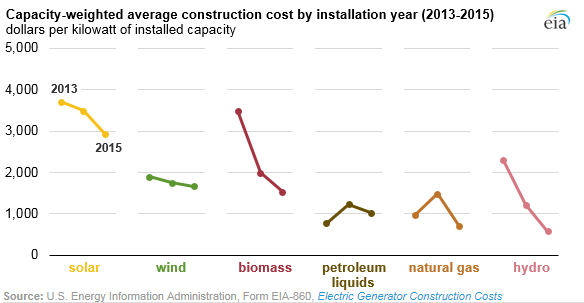 During that time frame, only power plants using petroleum liquids saw an increase in construction cost.

Demand for more renewable energy options has skyrocketed around the globe. At the end of June, Germany revealed that it shattered a green energy record by generating 35% of its power from renewable energy in the first half of 2017.

The country is planning to phase out all of its nuclear power plants by 2022 and has set a target of generating 80% of its gross power consumption from renewable energy sources by 2050.

Meanwhile, China recently announced that it successfully ran an entire region on only renewable energy for seven days. The Qinghai province of 5.2 million people was supplied only with wind, solar and hydro power, using 1.1 billion kilowatt-hours. That amount of power would have required 535,000 tons of coal.

China has reported that it plans to invest $366 billion in renewable energy technology by 2020.

The Renewable Energy You’re Not Watching

We are seeing more and more stories pop up regarding renewable energy farms and plants fueling our energy needs despite the falling prices of oil and natural gas.

Solar power is on the rise. The first phase of a new 248-acre solar farm in China — in the shape of a panda — was completed at the end of June. When all the phases are completed, the Panda Power Plant will be able to produce 3.2 billion kilowatt-hours of solar energy, eliminating the need for millions of tons of coal that would have otherwise been used to produce power for Chinese citizens.

Wind turbines will soon power Google’s data centers in Finland, Belgium, the Netherlands and Ireland, thanks to an exclusive 12-year deal signed with a new 50-turbine wind farm in Norway.

But while wind and solar power frequently capture all the headlines, there is another source of renewable energy that is available just about everywhere around the globe and could see a massive boom in demand. Click here to learn about the renewable energy technology that Paul believes could skyrocket investors to massive gains.