Market share is everything. It’s one of the axioms of doing business. After all, the more of the market for your product you control, the more you can dictate pricing, and, thus, the higher your revenue.

It’s the principle that led Microsoft to dominance in the late ‘80s, when the company practically monopolized the desktop PC market by making deals directly with manufacturers. It’s also the driving force behind Google’s free Android smartphone OS, which has come to dominate the handheld market.

Given the success of Microsoft, Google and similar companies, and the failure of so many upstarts and competitors, you might assume that the inverse must also be true: that lesser market share means lower revenue.

But as iPhone creator Apple Inc. (Nasdaq: AAPL) continues to show, revenue can often be more about value than volume: 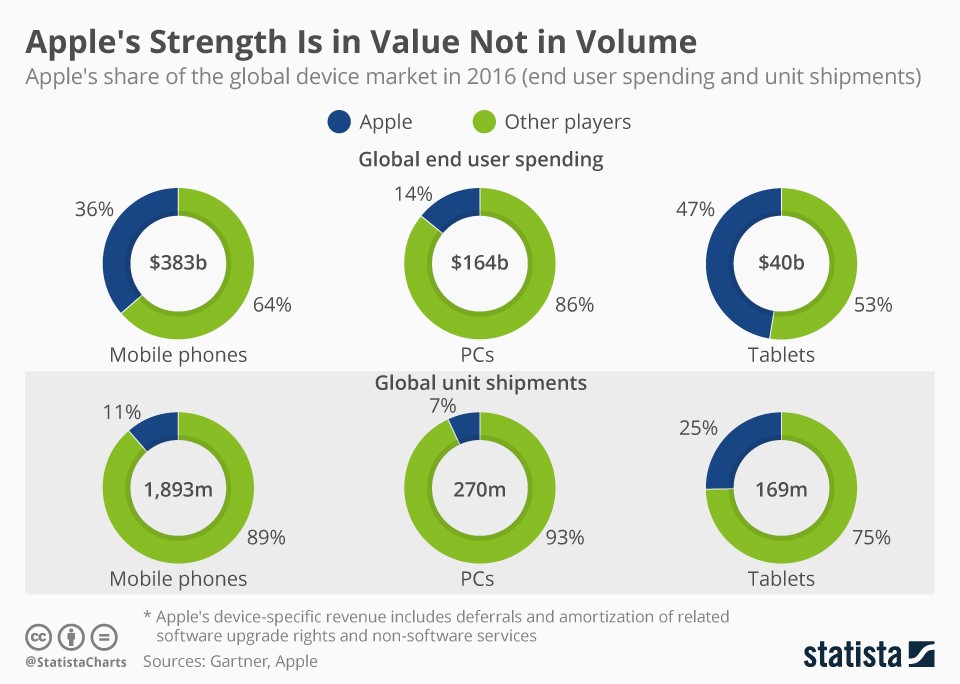 Despite being outstripped in unit sales volume by nearly all of its key competitors in the PC, mobile phone and tablet markets, Apple still rakes in an inordinate share of revenue. For instance, despite controlling just 11% of the smartphone market in 2016, Apple captured 36% of global end-user spending. In both PCs and tablets, Apple’s percentage of end-user revenue roughly doubled its market share.

Now, it’s common knowledge that Apple products are sometimes considerably more expensive for consumers than similar products from the likes of Microsoft or Google. And there’s a simple reason for why Apple charges more: Because it can. Apple consumers place considerable value on the company’s products, allowing the company to charge more for what many consider premium devices.

So when you hear that Apple may or may not hit its quarterly or annual shipments targets, there is some cause for concern. But as long as Apple customers are willing to pay more for devices and services, Apple’s revenue stream should remain strong.