I’m not a frequent social media user. Sure, I check Facebook a couple times a day for trending political news and to check up on family and friends. But I’m nowhere near the kind of power user that defines the millennial generation. I am, however, on social media enough to see that one of the bigger trends is to deride millennials for their seemingly whimsical work habits.

The problem isn’t that millennials don’t work — at 92 million strong in the U.S. alone, they are currently the linchpin of the American workforce. The problem is that millennials work differently than any generation that came before. Determined not to have the same nine-to-five drag as their parents, millennials are demanding flexibility in their work schedules and their work locations.

They are the first of the truly mobile workforces. And in the digital technology age, they are global.

If you’ve spent any time at all here at Banyan Hill reading our insightful market commentary, you’ve likely run across Paul and his passion for investing in the millennial generation. As Paul puts it, millennials have had “technology such as the Internet, cellphones and smartphones at their fingertips for most of their lives. They have witnessed the globalization of business and economic activity, where information and data are the critical factors.”

It’s no surprise, then, that many of Wall Street’s best and brightest analysts have turned their attention to companies frequented by millennials in both their personal and business lives. But while social media companies such as Facebook and Snap, and online retail and media companies such as Amazon and Netflix, generally steal most of the millennial-themed headlines, there are more than a few overlooked opportunities just waiting in the wings.

And one such company has the potential to outstrip them all.

With an average gross domestic product (GDP) growth of 6.5% for the past several years, China has established itself as the No. 2 economy in the world. What’s more, with the U.S. economic slowdown since 2008, China is on pace to overtake the U.S. as the dominant economy in little more than a decade. China also has its fair share of millennials, all vying for the same digital and mobile opportunities found in the West. And Alibaba Group Holding Ltd. (NYSE: BABA) is at the forefront of providing those opportunities.

Like its American counterpart Amazon, Alibaba is mainly known as an online retailer. And just like Amazon’s market share in the U.S., Alibaba has very little competition in China, controlling about 80% of the Chinese e-commerce market. Overall, domestic online retail sales accounted for 77% of Alibaba’s revenue, according to the company’s most recent quarterly report. And with the Chinese economy still growing — think of the U.S. economy in the early days of the Internet — Alibaba has managed impressive year-over-year growth of about 54% on average.

Outside of China, Alibaba is only just beginning to make its presence felt on the retail front. International sales amounted to just $353 million in the final quarter of 2016, but the results were a 288% increase over the year prior. And with Alibaba making a concerted push to remove counterfeit products from its websites, the company should make even more headway in copyright-sensitive Western economies going forward.

But retail is just the beginning for Alibaba. The company’s Alipay online payment processing division controls 51% of the Chinese market and is already expanding into Europe, with more than 2,000 locations currently accepting the service. While Alipay is still far behind PayPal’s nearly 75% control of the U.S. market, Alibaba has both room to grow and the backing of the Chinese government, meaning the company could rival PayPal in just a few years.

But the biggest growth opportunity for Alibaba remains its cloud services unit, Aliyun. Aliyun has seen revenue grow by triple-digit percentages in each of the past seven quarters. Additionally, Alibaba’s cloud services have already passed the $1 billion run rate mark in just a few scant years. While Aliyun is still far behind Amazon’s cloud services in revenue, at the rate it’s growing, Alibaba could challenge Amazon in just a few more years. In fact, a report from Synergy Research Group recently noted that market share topped 40% for Aliyun in China and is rising rapidly.

Adding Alibaba to Your Portfolio

Investing in Alibaba stock right now may seem a bit risky. After all, President Donald Trump is pushing his “America first” economic plan, which could severely limit the company’s access to U.S. sales. Luckily, Alibaba has plenty of growth opportunities outside the U.S., and it’s helped push BABA stock to record highs. In fact, BABA broke out above former resistance at $110 just this week. While consolidation should be expected after the move, toppling this former high could be a signal that BABA stock is ready to continue its longer-term rally skyward. 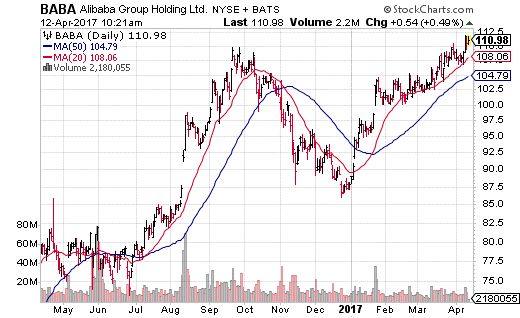 Alibaba has considerable growth prospects with, or without, full access to the U.S. market. As such, BABA stock is likely a long-term buy on any pullback to the $100-$110 region. As always, if you’re looking to add BABA stock to your portfolio in an efficient manner, you can “insure” your position by purchasing a near-the-money May $100 put, or you could follow my colleague Chad Shoop’s advice from Pure Income and name your price by selling a May $110 put in hopes of picking up the shares at a discount.

P.S. When Paul isn’t writing about the millennial generation, he’s usually covering the Internet of Things (IoT) phenomenon — what he calls “the biggest tech trend in history.” Paul has explained that the companies behind industrial robots, self-driving cars and other innovations are going to be stock market superstars. Click here to learn about his Profits Unlimited newsletter, which helps readers uncover great opportunities within the IoT revolution. 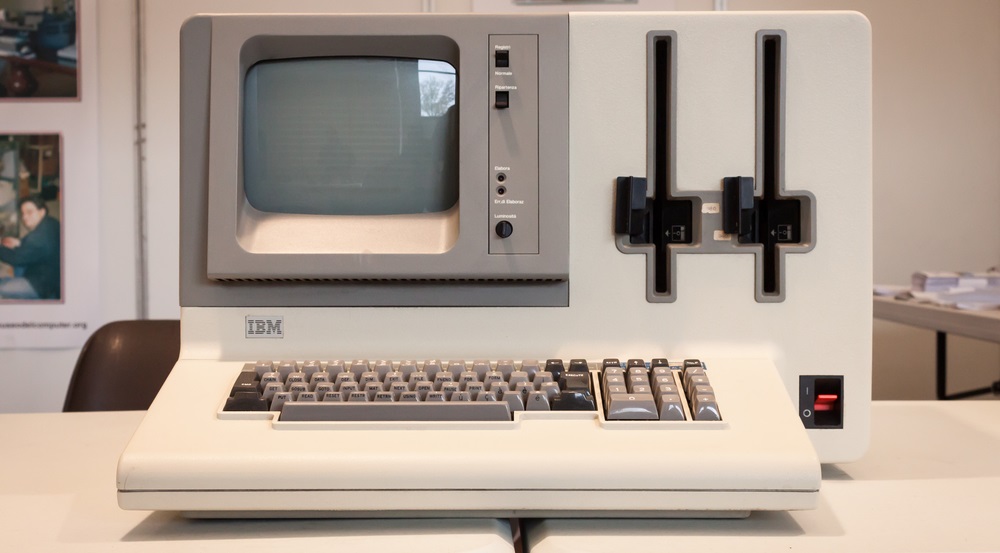