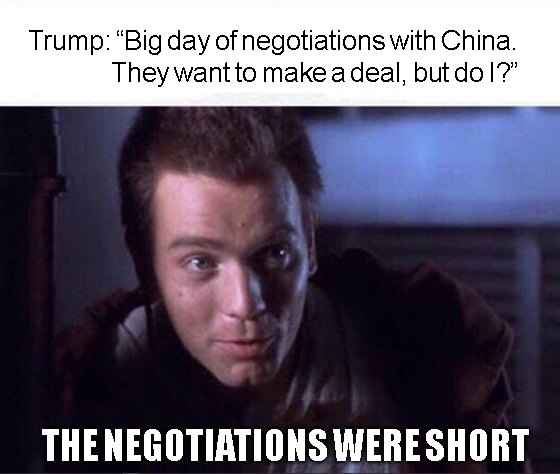 President Trump: “But Do I?”

Boy, did I jump the gun on the Chinese fire drill reference yesterday.

Wall Street has literally been running around in circles all day due to conflicting reports surrounding the start of U.S.-China trade negotiations.

First, we heard that there was no progress in the negotiations at the deputy level from the South China Morning Post. According to the Post, China’s Vice Premier, Liu He, would leave a day early due to the failed negotiations.

Then we heard that the White House was considering suspending next week’s tariff increase in exchange for a currency pact as part of a partial deal. Additionally, reports emerged that President Trump was granting licenses for some U.S. companies to sell supplies to blacklisted Huawei.

Now, in the latest development, we have a presidential tweet about Trump meeting with Vice Premier Liu tomorrow at the White House:

Big day of negotiations with China. They want to make a deal, but do I? I meet with the Vice Premier tomorrow at The White House.

I tried to update the Trade War Cycle chart for you today, but the darn thing is going crazy after this morning’s flurry of conflicting reports:

Seriously, though, the key takeaway here comes from the president’s own tweet: “But do I?”

China’s Liu said that the Chinese side wants to “promote positive progress,” but can that be accomplished when the president is issuing coy tweets surrounding the issue?

The thing is, China is unlikely to relent on issues such as intellectual property and forced transfers of technology. If these core U.S. issues are not on the table, the outcome of the trade talks will ultimately be decided by “but do I?”

Will President Trump compromise on those issues to get a partial trade deal done?

I suppose we’ll find out tomorrow.

Good: You’re the Best Around

Nothing’s ever going to keep Netflix Inc. (Nasdaq: NFLX) down … not even a leg sweep from Disney+.

According to a recent survey from Piper Jaffray, Netflix subscribers are just not interested in new offerings from The Walt Disney Co. (NYSE: DIS) or Apple Inc. (Nasdaq: AAPL). A whopping 72% of respondents said they would not subscribe to Disney+, with 77% dissing Apple TV+.

“Most existing Netflix subscribers appear to be trending towards multiple streaming video subscriptions,” Jaffray said in the report.

Multiple streaming options makes complete sense … especially if you factor in that the average cable TV bill in the U.S. is about $100 per month. Even if they have two or three streaming services (averaging about $10 per month each), subscribers cutting the cord can still save a lot of money and get the content they want.

The survey also flies in the face of a recent barrage of negative commentary from the brokerage community, including a price-target cut from $420 to $370 today by UBS.

We should have more concrete details on Netflix’s projections for increased competition this time next week, when the company reports third-quarter earnings results.

Better: A Slice of Apple Pie 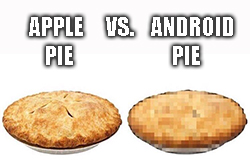 I simply love pie. Warm apple pie with ice cream is the best.

But I’m not going to pay an arm and a leg for it just because you’ve dressed it up all nice and pretty. The same clearly holds true for Apple’s iPhones. Reports of rising demand for Apple’s new iPhone 11 are gaining momentum on Wall Street.

First, Cowen & Co. upgraded a slew of Apple suppliers on a bullish outlook for increased supply chain demand. Then, Longbow Research upgraded AAPL to “buy” from “neutral” for the same reasons.

As I’ve noted before, rising iPhone demand is key to Apple’s drive to become a services-oriented company. The more iPhones on the market, the more services Apple can sell. And if you thought the margins on iPhones were great, wait till you see what Apple can do with services. 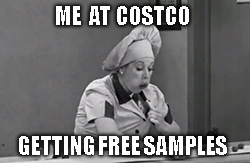 As I said at the time: “Today’s lull in activity might be your chance to jump on.” Man, I love being right.

But you don’t have to take my word for it. Guggenheim analyst John Heinbockel said Costco’s September results were solid, touting a 17.8% rise in e-commerce sales.

“The strength is relatively broad-based across both consumables and discretionary products, exemplifying the health of the brand,” Heinbockel wrote.

COST’s shares are now up more than 43% year to date, and only one thing could spoil the rally over the short term: psychological resistance near $300. The $300 area is a major milestone for the stock, and breaking through could take a bit more momentum than the market has to offer right now.

If you are interested in adding COST to your portfolio, look for its shares to stall (and even pull back) near $300 before jumping in.

We have quite a bit of cheek this week. So, let’s dive right in, shall we?

First up, we have Domdsr (if that is in fact your real name), who wrote:

Whatever happened to trade wars are easy to win!!! What a joke. 😭

Dom (do you mind if I call you Dom?) is just one of many Great Stuff readers frustrated with the state of the U.S.-China trade war. His comment is also one of the only ones I can get away with publishing — seriously, guys.

I understand your frustration, but Great Stuff and Banyan Hill have given you excellent ways to profit in this turbulent market. For instance, Paul ’s “Strong Hands” approach to the market.

Paul and his Bold Profits team encourage the Strong Hands approach as a method to hold your ground on investments that are sure to come out on top — no matter what the market throws at you. In fact, this is the secret behind Paul’s proven strategy to massively grow your wealth.

Click here to take your own Strong Hands approach to the market.

Next, we have Reddy P., who wrote:

Thank you for your reports, and they are facts and not fake. I really enjoy reading your reports and hopping that you will continue for a while. I did not get so far any good solution to make more money from current volatile market.

Thank you for your kind words, Reddy. I make it a point every day to be sure that Great Stuff tells you the truth — with a heavy dash of sarcasm and humor, that is. Investment advice is no good if it’s sugarcoated. You need the real facts.

As for investment solutions in this volatile market, have you checked out Banyan Hill expert Charles Mizrahi?

Charles has a very even-handed approach to value investing that can help guide you through this market morass. Right now, Charles has a very lucrative opportunity in the tech sector that could ease those volatility war wounds.

Are you down for some small talk?

Good. Let’s talk about the weather.

The National Oceanic and Atmospheric Administration (NOAA) predicts a mild winter this year … something about “El Niño,” which I hear is Spanish for “The Niño.” 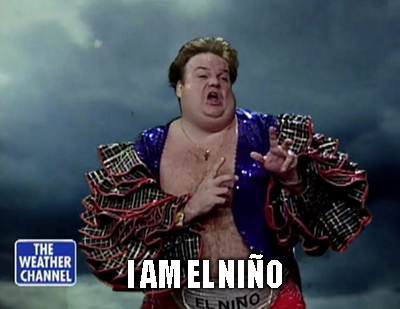 Warmer winters are bad news for energy investors, especially those holding natural gas stocks. But, as history has shown us, even “mild” winters are subject to unexpected polar blasts from up north. Such unpredictable events can extend cooler temperatures and drive natural gas demand higher than expected.

Naturally, there are a few ways to benefit from these winter woes. Banyan Hill expert Anthony Planas has just the thing to keep you warm during these winter months (no, it’s not pot).

As he puts it: “If you’re careful and up for the challenge, you’ll have fun with these trades … and end up with hefty profits in your pocket.”

To find out what trades Anthony is talking about — and how you can profit — read his latest article, “How to Make Triple-Digit Earnings Investing in Natural Gas This Winter.”