Here’s Why One Bitcoin Investor Lost on Every Trade

As bitcoin dropped by 50% late Tuesday afternoon, my phone rang. It was my friend Jordan, and I shook my head as I took his call. I knew he was wondering if he should sell again.

But here’s the crazy part: He’s down on his bitcoin investments!

That’s right — even with an average cost significantly below bitcoin’s current price, Jordan still managed to lose money … in an asset that skyrocketed 1,400% last year.

It’s possible because he lets volatility shake him out of his positions. He gets out at exactly the wrong times, when if he just listened to the advice I’m about to tell you today …. he’d be up big in the past year.

The Ups and Downs of Bitcoin

Most people don’t realize that not sticking to a plan has eaten into many crypto investors’ profits.

Any casual observer would think investors are raking it in! All they had to do was buy some bitcoin at any point last year, hold on to it and cash out.

Take a look at some of these spectacular bitcoin peak-to-trough drawdowns over the past year:

One defining characteristic of volatile markets is their tendency to shake out the weak hands before the next move higher. I outlined this concept last summer in an article for Investopedia titled: “Bitcoin’s Bloody Sunday Has Weeded Out the Weaklings.”

And that’s what’s causing some bitcoin investors, like Jordan, to miss out on massive profits.

Jordan kept repeating the same mistake: He would chase the market after a bullish run and then dump his holdings a few weeks later when the reversal occurred.

This pattern repeated itself more than a few times last year, and typically began after (insert Asian country here) threatened to shut down crypto markets or restrict citizens’ access.

The financial news media would rush to publish bitcoin obituaries, and bears who had been short since $1,000 would triumphantly declare victory. The latest wave of crypto investors would head for the exits.

Seasoned crypto traders have a name for this condition — it’s called “FUD”: fear, uncertainty and doubt.

After selling into the latest panic, bitcoin investors like Jordan would then feel their emotional pendulum swing from the fear of losing to the fear of missing out, as prices became a simple manifestation of greed and fear. They would then jump right back in.

All investments mirror the behaviors of their buyers and sellers.

Speculative investments are more volatile partly because they attract risk-seeking individuals. On the other hand, conservative investments exhibit lower volatility due to the prevalence of buy-and-holders.

That’s part of why cryptos are so volatile.

Now, while some investors may sell too early, causing them to lose out on profits, there’s also the opposite problem.

A few years ago, a Coinbase study found that nearly 60% of users were under the age of 34. Suffice it to say, millennials have a higher risk tolerance than older investors with children trying to save for retirement. 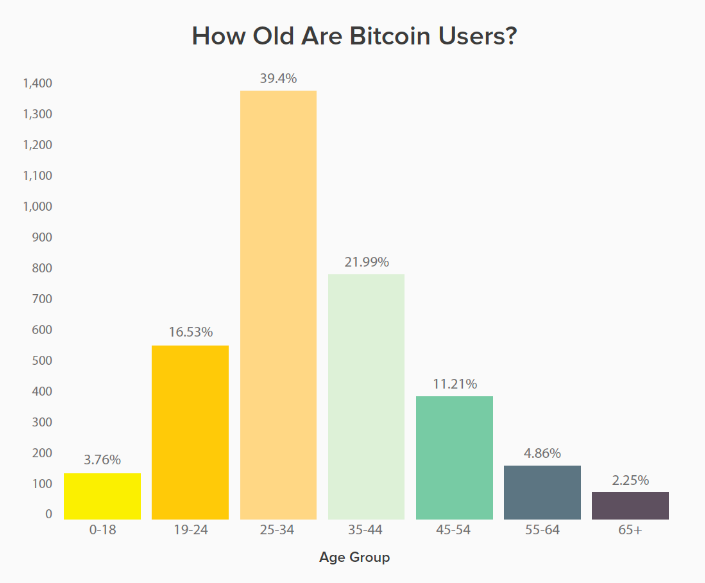 It is not surprising that the crypto markets are dominated by millennials. Entering these markets requires the technical prowess of a generation raised on information technology, and a willingness to trust the digital mechanics that power cryptocurrencies.

For many of the newcomers, this is their first foray into investing. They skipped the “boring” 20%-plus returns of the stock market last year and went straight for the crypto. None of them have faced a true bear market, as every recent dip has been met with eager dip buyers.

However, most of them, like Jordan, have no plan of attack. Everyone knows how to buy; nobody knows how, or when, to sell. Millennials have a penchant for risk, but this can also be a curse when they avoid selling when they should.

It is no wonder that investors keep losing money on an asset class that rose 5,000% in two years.

If You Fail to Prepare, Then You Are Prepared to Fail

One of the greatest investors of all time, George Soros, had no qualms with buying bubbles. He famously said that when he saw a bubble forming, he would rush in to buy, “adding fuel to the fire.” Soros also knew when, and how, to sell.

The biggest mistake by investors is not having a strategy — and giving into emotion. Every trade must have an entry point, an exit point and a stop-loss to keep you on track.

Booking profits might limit your gains, but stop-losses will also prevent total losses. As a rule of thumb, I always leave an open “good ‘til canceled” limit order to sell 25% of my position at higher prices. This forces me to take a profit and reduces my initial cost basis.

If you are consistently booking profits, you will be left with a better mindset when the panic selling happens.

Helping everyday traders capitalize on crypto volatility with disciplined, mindful trades is why I’m excited to work with Banyan Hill on an upcoming service. There continues to be huge gains to be made in this market.

Editor’s Note: Even if you’ve never purchased a single cryptocurrency before … even if you’re not tech-savvy … even if you don’t have much money to get started … Ian King’s Crypto Profit Trader research service makes it easy to grab 1,000% wins in the cryptocurrency market. In fact, Ian is so confident in his strategy, he’s guaranteeing that anyone who follows his trade recommendations will have the chance to turn every $1,000 into $25,000 in the next 12 months! However, sign-ups for Ian’s service close tonight, March 1, at midnight EST, so you must act now to be part of the MASSIVE crypto rally that’s on our doorstep. To learn why now the perfect time to start trading cryptocurrencies, click here to watch the Crypto Profit Summit webinar presentation.

Apps like Robinhood and Square Give Crypto Marketplace Room to Grow