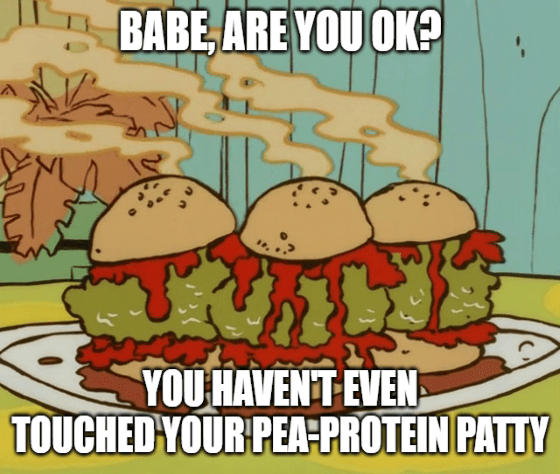 The Misery Of Meatless Mimicry Mockeries

I hope you brought your appetites, Great Ones — and strap on those feed bags! Pea-rice-potato burgers are back on the menu.

Umm … can I politely decline?

Don’t worry about being polite; not even an empty stomach could get me to savor the news Beyond Meat (Nasdaq: BYND) just plopped on the Street.

And if the mental picture of plopping potato patties has you booking it to the Pepto … just you wait.

Gasp! How could they turn those poor vegans into jerky?!

No, no, once again, Beyond Meat is reinventing the beef … Frankenstein-ing together what’s sure to be a success to the, umm, dozens of vegan beef jerky fans out there.

I mean, do any of y’all actually want plant jerky, or are we just throwing fake meatwads at the wall at this point to see what sticks? Is nothing sacred anymore?

To bring this ill-fated meatless wonder into fruition, Beyond is teaming up with none other than PepsiCo (Nasdaq: PEP), a name you might recognize from … literally everywhere.

So, with backing from one of the world’s biggest snack makers and distributors, how could Beyond’s meatless vegan jerky ever go wrong?

Now, the real deal for fake-meat fans is Beyond’s second sound bite of the day: The McPlant is back, baby!

Just like the Kentucky Fake Chicken announcement earlier this month, taste-testing for the McPlant was apparently successful — at least by Beyond Meat’s standards. (Mmm, my favorite flavor … salt!)

The slow rollout for the McDonald’s (NYSE: MCD) meatless mac started back in November of last year “so the chain could understand the impact on its operations” … presumably, whether or not people actually wanna eat this junk.

Even back when the McPlant was still a McRumor on the McDrawing Board, Wall Street was already at attention and salivating.

As Great Stuff noted last month: “Investment bank Piper Sandler thinks the McPlant is about to get a whole lot less exclusive and could undergo a nationwide rollout in less than three months.” Heck, said analysts were so hopeful for a nationwide McPlant rollout that Piper Sandler upgraded the stock in anticipation. 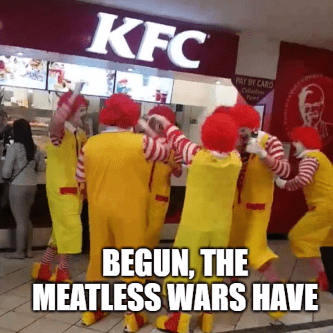 Well, speak of the meatless devil.

On February 14 — save the date! — the McPlant test will roll out to 600 more McDonald’s locations around Dallas-Fort Worth and the San Francisco Bay area. The faux burger is made of peas, rice and potatoes as Beyond further mocks the vegetable world for all it’s worth.

That was enough for the Street to swing back onto the Beyond Meat bandwagon, sending BYND shares soaring 6% today. But all you longtime Great Ones know the plant-based meat of the matter here: Hold your horses — and your hype.

Beyond can sign as many partnerships as it wants, test whatever meatless monstrosities it wants, and hype up BYND investors over and over again … but where’s the beef? The earnings? The rave reviews over taste?

None of these skunkworks projects ever lead to actual Street-satisfying earnings — just look at literally every time Beyond Meat has reported in the past. Yet Beyond keeps its hype cycle a-spinning, digging an even deeper hole for when Wall Street’s scythe of expectations comes back ‘round again.

I sure hope that the McPlant sells as well as Beyond hopes because, after a certain point, BYND investors need to seriously question: If these partnerships with the who’s-who of fast food and snack food don’t sell your product … maybe it’s not that good of a product?

I’ve said it once about the fake-meat trend, and I’ll say it again: “Customers want plant-based proteins if and only if they taste good — end of story.”

Compared to competitors like Impossible Foods, Beyond’s history in the “taste” department is lacking, to say the least — and so far, its earnings have only supported my anecdotal findings.

But hey, we’re just talking about my tastes in the fake meat market, right? Be sure to add your hot takes in the inbox — especially if you want a chance at landing in tomorrow’s edition of Reader Feedback.

So, go on and tell us what you think: Are you invested in Beyond Meat? Will the McPlant be a success? Will we all be eating pea, rice and potato burgers by the end of the year? (Boil ‘em, mash ‘em, stick ‘em in a … fake burger.)

No, not the McPlant — exclusive, first-look access to Ian King’s breakthrough strategy!

In his exclusive Banyan Hill presentation, “Profit Framing With Ian King,” he’s sharing it with you, too.

Ford, Out Of Focus 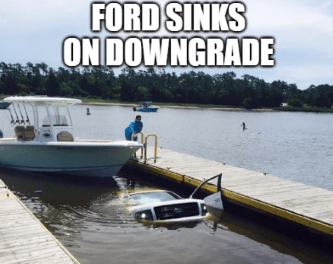 Even though Ford is hot on Tesla’s (Nasdaq: TSLA) heels when it comes to electric vehicle (EV) sales, analyst Philippe Houchois downgraded F stock from buy to hold while simultaneously raising his price target from $20 to $25 per share.

According to Houchois, Ford’s EV forays haven’t warranted its meteoric climb in share price, with F stock now up more than 100% in the past year. At today’s stock market valuation, Ford is left with very little upside potential … Houchois’ words, not mine.

Normally, I’d call today’s downgrade a buying opportunity for Ford enthusiasts … but seeing as Houchois’ hounding had virtually no effect on Ford’s stock, I’ll leave it to you to decide whether Ford is trading at enough of a “bargain” to buy in.

I personally believe that with a little more focus, Ford could become one of Tesla’s biggest contenders in the EV arms race … assuming it doesn’t “cautious” its way out of the running before the rubber meets the road.

The EV market is on an absolute roll as more cars go electric. But while everyone else is focused on the companies that make EVs themselves … Paul has set his sights on a far more lucrative profit story.

According to Paul, a brand-new market is forming that could be 10X bigger than EVs — and you can buy into it right away.

Never one to knock novelty experiences, Amazon (Nasdaq: AMZN) has decided to open its first physical clothing store in the middle of a Los Angeles mall … which I can only guess is for added nostalgic effect?

Called Amazon Style — oooh, so original — the store will sell, you guessed it: women’s and men’s apparel, shoes and accessories ranging anywhere from $10 “basic” items to $400 “timeless” pieces. Nothing says “timeless” like dropping beaucoup dollars on new digs that will disintegrate after three washings.

Of course, this is Amazon we’re talking about … so its Style showroom isn’t gonna be your run-of-the-mill retail store.

Aisles of overstuffed clothing racks are too pedestrian for the renegade retailer — instead, Amazon’s brick-and-mortar mart will feature digital displays with just one size and color of a particular product.

Customers can then scan a QR code on their phones that’ll show them additional sizes and colors of said item stuffed in the back of the store for safekeeping.

But the fun doesn’t stop there. After scanning the QR code, customers can click a button in the Amazon app to send clothes to a dressing room or checkout counter. Oh, you fancy, huh?

Personally, this sounds like an awful lot of screen time for an in-person shopping experience. Why go into a store just to look at a screen when I can look at a screen at home and save myself the trip?

What do you think, Great Ones? Is Amazon our new Style icon? Or is its physical clothing store just a passing faux pas? Let me know: GreatStuffToday@BanyanHill.com.

Membership Has Its Privileges

Brace yourselves, Great Ones: Social media subscriptions are coming … and we have the mother of all things Meta Platforms (Nasdaq: FB) to thank for it.

If you’re telling me I’m gonna have to pay $4.99 a month just to be angry with my family on Facebook, I’m gonna riot.

Calm down there, Three Days Grace. We aren’t that far down the social media hell hole just yet … with “yet” being the operative term. Nay, subscription access is coming for intrepid Instagramers who’re willing to pay for extra creative content from their favorite … well, content creators.

The move allows Meta to drive engagement among its Instagram users while also rewarding the people peddling products on its platform. For now, subscriber access will be limited to Instagram Stories, with exclusive offers appearing in photo or video posts that disappear after 24 hours.

Not only does this incentivize Instagram users to spend more time on the app — heaven forbid you miss the chance to save 20% on Target’s holiday mugs — but it also increases the earnings potential among Instagram’s content creators.

Right now, subscriptions will range anywhere from $0.99 to $99.99, which creators can charge at their own discretion.

As much as I despise Meta and everything it stands for, I can’t deny this is a smooth move on the part of the social media magnate.

After all, the more content Meta sells to users, the more money it makes in the long run … and Meta’s gonna need all the money it can get to deliver people into the digital metaverse that was promised.

Up, Up And Away 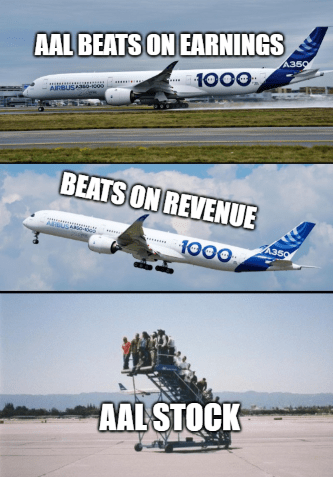 The airliner slipped into the earnings confessional this morning and delivered a surprise double beat, with both earnings and revenue coming in better than expected … if that’s what you can call a $1.42 per-share loss.

Still, analysts had deigned to be disappointed with a $1.46 per-share loss, and we all know that doing just incrementally better than the Street’s flimsy forecast is a “win” in most investors’ books.

For the quarter, American Airlines managed to make $9.34 billion in revenue despite raising flight attendant pay and offering bonuses to staff members just so they would show up to work.

Still, the real deal Holyfield for AAL investors is that COVID-19 concerns will continue to hamper profitability until flight capacity is fully restored — which could take the better part of three months, according to American Airlines aficionados.

For their part, AAL investors were reminded that when learning to fly, coming down is the hardest thing. And come down AAL did, sinking more than 1% on today’s topsy-turvy earnings report.

And on that note, we hand it over to you! Don’t forget to hit us up at GreatStuffToday@BanyanHill.com, and we’ll catch you in tomorrow’s Reader Feedback. 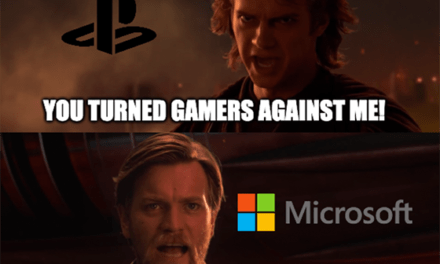 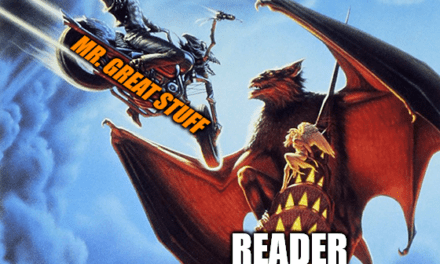