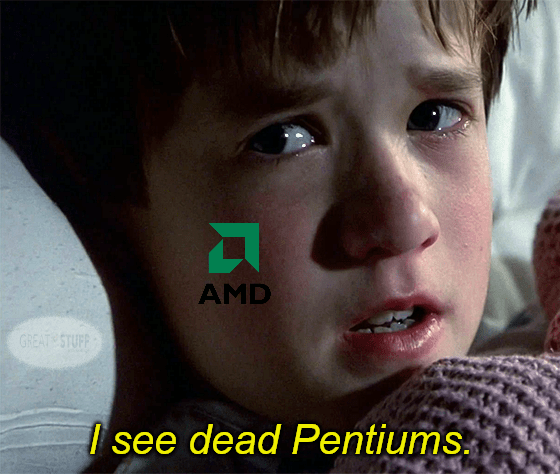 Great Ones, I absolutely love saying “I told you so.” It’s, like, my second favorite thing in the world. The first is, obviously, making you money.

So, when Advanced Micro Devices (Nasdaq: AMD) reported blowout fourth-quarter earnings and rallied more than 11% … I was ecstatic. I literally got a twofer.

Before I get all into gloating — too late! — let’s look at AMD’s report:

And all of this during a pandemic, supply chain issues, a semiconductor shortage and the Great Resignation.

You know what that tells me, Great Ones?

It tells me that AMD’s business is dominating.

The company is still siphoning customers from rival Intel (Nasdaq: INTC) and even giving Nvidia (Nasdaq: NVDA) a run for its money … but, mostly, Intel. After all, AMD’s Enterprise business — the one that makes server chips — saw revenue skyrocket by 75%!

Poor Intel. Let’s play “My heart bleeds purple Kool-Aid” on the violin for it.

Anywho, AMD’s business is doing so well that the company said it expects 2022 revenue to soar 31% to $21.5 billion, putting analysts’ estimates for $19.26 billion to shame.

Oh, and all those tales that analysts were telling you about the semiconductor cycle coming to an end? Hogwash. AMD expects $5 billion in revenue during the first quarter due to a continuing PC and server upgrade cycle. 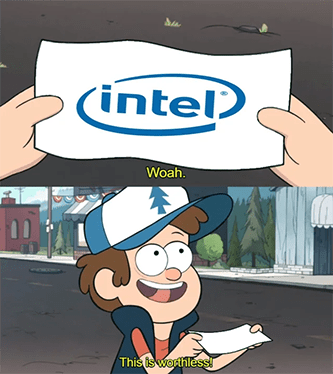 Honestly, I don’t know how analysts expect the semiconductor cycle to be over.

During the mad rush to upgrade to accommodate employees working from home, many businesses didn’t get the upgrades they were looking for … because, ya know, that whole semiconductor shortage thing.

That upgrade cycle is still in full effect, and AMD is cashing in big-time.

So, to all you out there who said I was crazy for recommending AMD again this January and complained that “AMD stock is down!” right after I recommended it … I told you so!

As you all know, the current market decline has absolutely nothing to do with AMD’s business.

And if not, be sure to give me an earful about it: GreatStuffToday@BanyanHill.com.

Not to mention, this stunning new technology is about to cut the cost of electric vehicle (EV) batteries in half … meaning by next year, an EV is expected to cost the same as gas-powered cars.

Alphabet (Nasdaq: GOOGL) released a fourth-quarter earnings report last night that most companies only dream of. Revenue climbed 32% to $75.33 billion on the back of blowout ad sales, while earnings came in a full $3.35 per share higher than analysts had hoped for.

And yet Alphabet’s earnings beat isn’t even what Wall Street’s buzzing about today.

Instead, all anyone and their mother can talk about is Alphabet’s 20-for-1 stock split, which will take effect after the close of business on July 15 (should shareholders give the split their seal of approval, that is).

The long and short of this story is that if you’re already an Alphabet investor, you’ll still own the same dollar value of GOOGL stock after July 15. But if Alphabet’s been beyond your budgeting means up until now … well, buddy, that stock price just got infinitely more palatable. 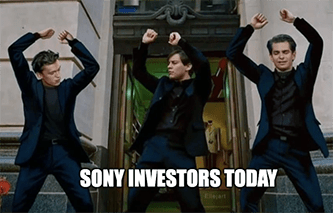 Name a bigger box-office hit in 2021 than Spider-Man: No Way Home … I’ll wait. Seriously, if you have other movie recs that can top No Way Home, I wanna see ‘em — stat.

For the record, Venom: Let There Be Carnage helped hype Sony’s performance, too … but even mentioning Venom feels like giving the goopy antihero a participation trophy at this point.

That said, while Sony’s movie division defied the laws of gravity, its gaming division snapped back to reality after continued chip shortages ate into PlayStation 5 profitability. Chip delays also caused Sony to cut its PS5 sales forecast from 14.8 million to 11.5 million units.

In other words, I’m still not getting a PS5 this year. And no, I’m not happy about that.

And then there was PayPal (Nasdaq: PYPL) … the antithesis of Alphabet’s astounding earnings.

Unlike its big tech brother, PayPal missed its “measured” guidance by a penny — oh, the horror! — and gave first-quarter non-GAAP earnings projections of $0.87 per share … well below Wall Street’s anticipated $1.16 per share.

According to PayPal, all the usual suspects were to blame for its poor performance, including “high inflation, the end of stimulus checks (wut?) and the impact of ongoing supply chain issues on cross-border volumes.” Oh, and eBay (Nasdaq: EBAY). We mustn’t forget eBay.

See, PayPal was once eBay’s trusty payment steed. But in the land of fintech competitors, eBay said sayonara to its old Pal in favor of “other payment methods,” … which, in turn, is taking a bite out of PayPal’s paycheck.

To make matters worse, PayPal is almost exclusively an online payment app in a world where tap-to-pay smartphone tech rules the roost. So, unless it dives deeper into these new-fangled fintech prospects, PayPal’s long-standing payment throne may soon be up for grabs.

PayPal investors are certainly feeling this innovation pain, with PYPL stock down 26% on the day. Ouch.

One small company has a patent on this new “bio-chip” — and you can take up an early position in their stock if you act right now. 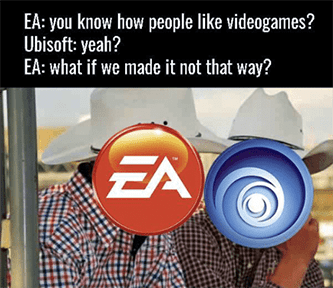 For the most part, video game giant EA’s earnings weren’t that bad. I mean, sure, non-GAAP earnings came in $0.03 shy of Wall Street’s expectations.

And, yeah, net bookings — a form of adjusted revenue videogame analysts love to look over — also missed their $2.67 billion mark, coming in at $2.58 billion.

But the real fly in EA’s earnings ointment? Surprise! It’s still Battlefield 2042 — the highly anticipated first-person shooter game that shot itself in the foot after an abominable launch last November.

Bugs, glitches, cheesy dialogue, lackluster features and weapons, a map you can barely read … this game had it all. As a result, EA CEO Andrew Wilson notes: “The launch of Battlefield 2042 did not meet expectations.”

EA has (allegedly) committed to “bring the game up to the highest standards that we all hold for the franchise.” Problem is, EA doesn’t hold that high of standards to begin with. Lucky for Wilson, EA investors clearly aren’t EA gamers … or the stock would’ve been in the red today instead of climbing nearly 2%.

Ahoy, there! Welcome aboard Great Stuff’s virtual submarine as we dive deeper and deeper … and a lil’ bit deeper still into the murky waters of the metaverse.

Since yesterday’s talk of the digital land rush was such a glowing hit with you all — by all means, keep ranting away in the inbox — we want your opinion on an all-new meta venture. Something a bit closer to the heart … or at least the haptic feedback suit.

You heard me. Great Ones: Metaverse dating is about to be a thing. 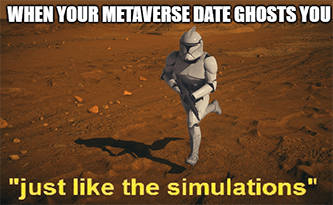 Oh yes! You can thank Match Group (Nasdaq: MTCH) for that. No longer content with just setting you up with bot accounts on Tinder … Match is exploring options for metaverse dating.

With last year’s acquisition of Hyperconnect, an augmented/virtual reality company in South Korea, the company now has the platforms and the tech to meet and mingle all across the meta world.

Maybe that private virtual island you bought for the digital clout will finally come in handy. Or better yet, online dating … in spaaaace!

So far, mum’s the word on this bizarre hybrid between OkCupid and Habbo Hotel, which leaves us all to imagine the endless possibilities of virtual reality hookups … whether you’re ready or not.

That brings us to today’s big debate: Would you go on a meta date?

And before the weird emails start flooding in, no, this is not a personal proposition … just a hypothetical question on how digital you want your dating life. Click below and let me know:

We wanted to know what you thought about General Motors’ (NYSE: GM) goal to overthrow Tesla (Nasdaq: TSLA) in the EV market — by 2025, no less.

GM is sure optimistic about its chances against the Big Red T. But your fellow Great Ones? Much less so … as in, it’s literally just 2.4% of you out there repping GM.

Of course, if you have thoughts you want to share about GM’s EV plight, AMD’s earnings delight or your metaverse dating gripes … share them now!

GreatStuffToday@BanyanHill.com is where you can reach us best. And here’s where else you can keep up with the Greatness all across the interwebs: 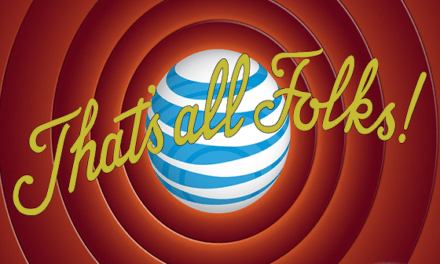 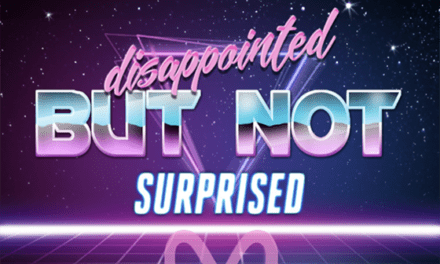