I really have no idea.

I’m not pulling your leg — I really don’t know.

With so much uncertainty looming, I’m not going to try to predict what will happen over the next several months.

Just three months ago, if you had told me that 33 million Americans would be filing for unemployment by the end of April, I’d have thought you had too many cocktails.

And if you told me the unemployment rate would be the worst in 70 years … fuhgeddaboudit.

Here’s my point: No one knows how the economy will react once businesses open up again, or what the rollout will look like.

Instead of trying to guess the unknown, I want to tell you what I do know.

So, today I share with you two stocks that should do well once the economy returns to normal.

Investing in these stocks could set you up for big returns over the long term.

Check out the complete details in the video below:

Unemployment And The Economy

Today I want to talk to you about the economy. I know what you’re saying: “Boy, Charles, it looks bleak.” And you’re 100% right. Thirty-three million Americans filed for unemployment since the COVID-19 outbreak. Insane.

Just in the last month, April, there were 20.5 million unemployed people — 20 million more in April than there were in March. So, the trend is picking up. The unemployment rate is now at 14.7%. Keep in mind, we were almost at full employment just prior to this, around 3.5%. It was tough for companies to find people. Now close to 14.7% are unemployed. This is the worst in 70 years of economic data.

All right, so how the heck can you find a job when the economy is shut down? It just makes no sense to me, and that’s why I think it’s going to get worse before it gets better. Never before in a period of time like this, and we’ve never even had a period like this in American history, so we really have no idea how the economy will react when it opens up again. We also don’t know if it’s going to be in phases or all at once. What’s going to happen? What’s the effect on unemployment? Business picking up, businesses closing down, we have no idea.

Years ago, when I was just out of high school, a good friend of mine — he was a teacher, really great guy — told me: “Charles, there’s an important kind of wisdom in knowing what you don’t know. Never be afraid to say, ‘I don’t know.’” I’ve gone through life with people who are just scared to say: “I don’t know.” They think they need to know the answer to everything. Unfortunately, that’s not really the case.

So, I’m not going to try to wow you with predictions or economic forecasts on what’s going to happen, because I don’t have a clue. But I can speak to you about what I do know, and that is certain companies in certain industries that should do very well when the economy returns to normal.

In the post-COVID-19 world, humans are still going to act like humans. One of the things they’re going to have to do is drive around. I don’t think that much is going to change, especially if you don’t live in a city where there’s mass transit. Even in cities where there is mass transit, people like to have their own cars to drive around. People still are going to need cars to get around, especially to go back to work.

Now, the thing about cars is they’re machines. They need upkeep, especially older cars, and they need constant maintenance. Now, the average age of vehicles on the road in the U.S. today is 11 years. Eleven years! These cars are going to need maintenance regardless, and I don’t see people going out after this pandemic — even when some of them get their jobs back — and buying new cars.

Heck, with 33 million unemployed and a majority of them hired back, my concern is that they’re going to be worried about putting food on their table and just getting a steady job, rather than going and spending money on a new car. It’s much easier to spend a few hundred dollars to fix up your old car than to buy a new one.

That’s why I like this auto retailer, O’Reilly Automotive (Nasdaq: ORLY). Now, what I’m looking at here is the same playbook that I saw back in the financial crisis in 2008. Right after the bottom in March 2009, the company’s same-store sales started to grow rapidly. It made sense. People were in similar situations, uncertain about the future. There was unemployment, people out of work, hours cut back. They still needed to drive and go somewhere or go to work. From the market low in 2008 to now, the stock has soared over 1,350%.

Auto retailers this year are down on the year, and that’s where I see the opportunity, the ability to get into a good company at a semi-decent price. O’Reilly should have a nice trend up for the next several years as people fix up their old cars while the economy gets back on its feet. The company has 5,000 stores, which is great because it has great distribution centers. It’s able to move. In retail, the name of the game is: “Turn your inventory over and over.” It has the ability to move inventory from one store to another. It is the 800-pound gorilla in this industry.

Off-price retailers did very well, and it makes sense. Why pay retail prices, department store prices or full prices when you could buy clothing at 40% off at off-price retailers? So, from the market low of 2009, this stock has soared over 500%.

What I like about Burlington is that it’s a retail business. People are still going to need to buy clothes and try them on, and they love the hunt of finding great bargains. The company has high inventory turnover and really strong relationships with its vendors — vendors that are dying to get rid of goods. So I see a galore of bargains, just the same way I saw in ’08.

Vendors have got to sell goods. Burlington’s going to be out there, buying them up and filling its stores. Customers are going to be lining up to get their 40% off in discounted prices, so the company should do well.

With Burlington, the thing I like about it is that its customer base is everywhere, from people with incomes from $25,000 to $100,000. There’s something for everyone. I do like Burlington for the long haul as well.

No One Really Knows…

The economy … I’m honest with you, I have no idea what’s going to happen. But human behavior won’t change that much for everyday things like driving cars and putting on clothes. People are still going to need to drive their cars, and they’re going to need to get them fixed and keep them longer. People are going to go fix them up instead of buying new ones, and O’Reilly’s in the sweet spot.

Same thing with dressing and wearing clothes, even though Zoom has taught us that you could be naked or only wear a shirt on the top — don’t worry, I’m wearing clothing. The thing is that, with the economic uncertainty, how the hell are you going to justify paying full price when you’re worried about putting food on the table? That’s the way I see this thing happening out. I see it playing out in a big way that you can’t beat Burlington’s changing selection and 40% off-brand prices. People are going to flock there, just like they did in ’08.

In order to profit off these industries, I find stocks that the market has mispriced and show my readers how to take advantage of them.

I first look for mega trends with long runways of growth ahead of them. Then I find the best stocks within that industry that are trading for bargain prices.

Basically, I do all the heavy lifting so that my readers don’t have to. 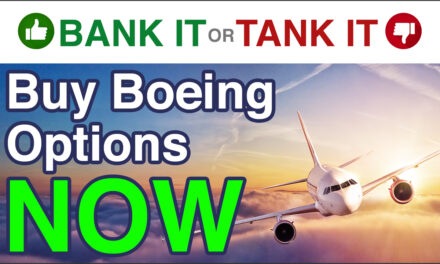