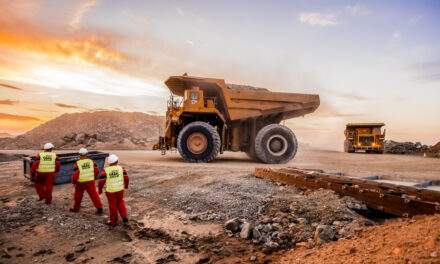 Today there’s a rare and irradiant metal that’s worth more than gold.

As tensions flare in the Ukraine, a potential boycott of Russian ore could send prices soaring.

In today’s video, I give you the inside scoop on this mystery metal, sharing the name (and ticker symbol) of the company that’ll profit most from it. Don’t let this rare recommendation pass you by.

Hello everyone, it’s Ted Bauman here, editor of the Bauman Daily with your weekly Friday video. I’m still in South Africa. I’m going to be here until next week and after that I’ll be back in Atlanta. But for now I am reporting from here. It’s interesting that I am because this country has the potential to benefit enormously from things that are happening in the global environment. So let’s start with why I think that. Here is a picture of a metal called palladium: 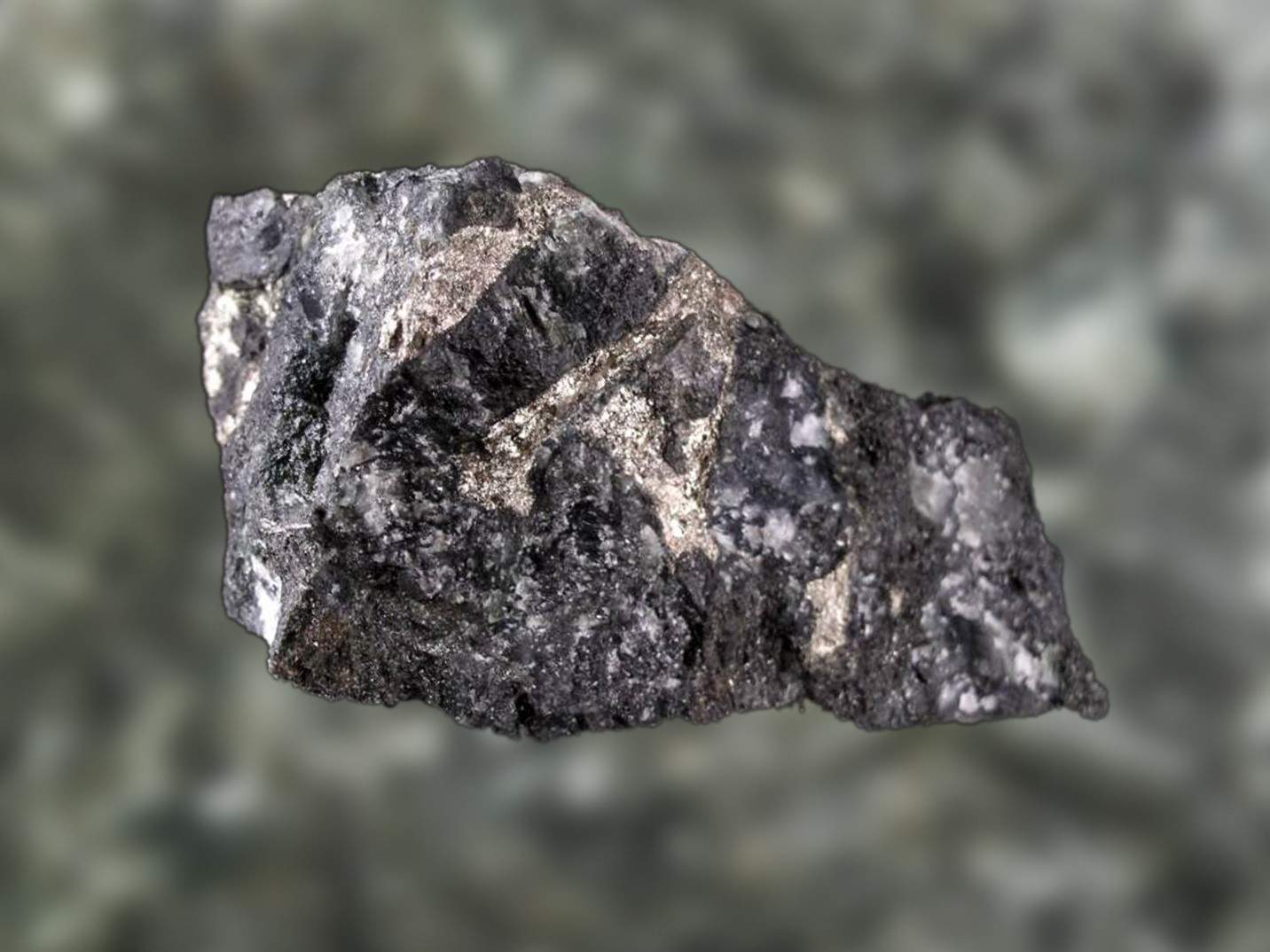 It’s been cut so that you can see how it looks on the inside. But essentially it is a critical way to try to reduce global emissions from the use of automobiles.

Now, why should that matter?

The Price of Palladium

Well, one of the key things about palladium is that it is produced in only a few parts of the world and those parts of the world include the one I’m in right now, but also a country, which is very much in the news. So let’s look at what’s happening to the current price of palladium. Now here’s a chart that goes back actually about 10 years or so, but palladium has been higher: 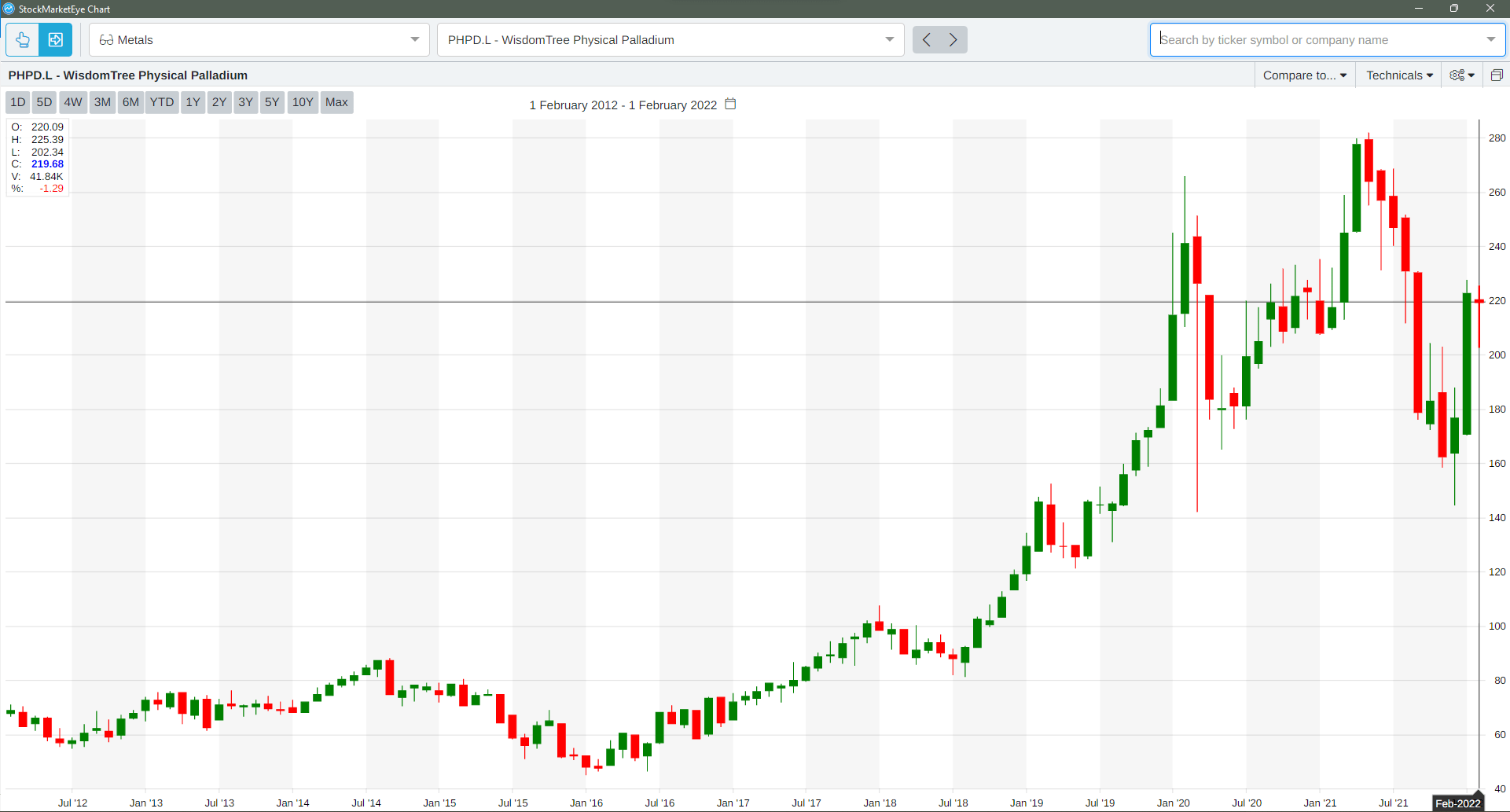 But look at that big green bar on the right-hand side, it has just jumped. That’s a weekly chart, it has jumped just dramatically in the last week or so. And the reason for that is going to become clear in a moment as I explain. Now, here is it chart that shows platinum, which is a related metal. This is a five-day chart going back five days, I’m recording this on Thursday: 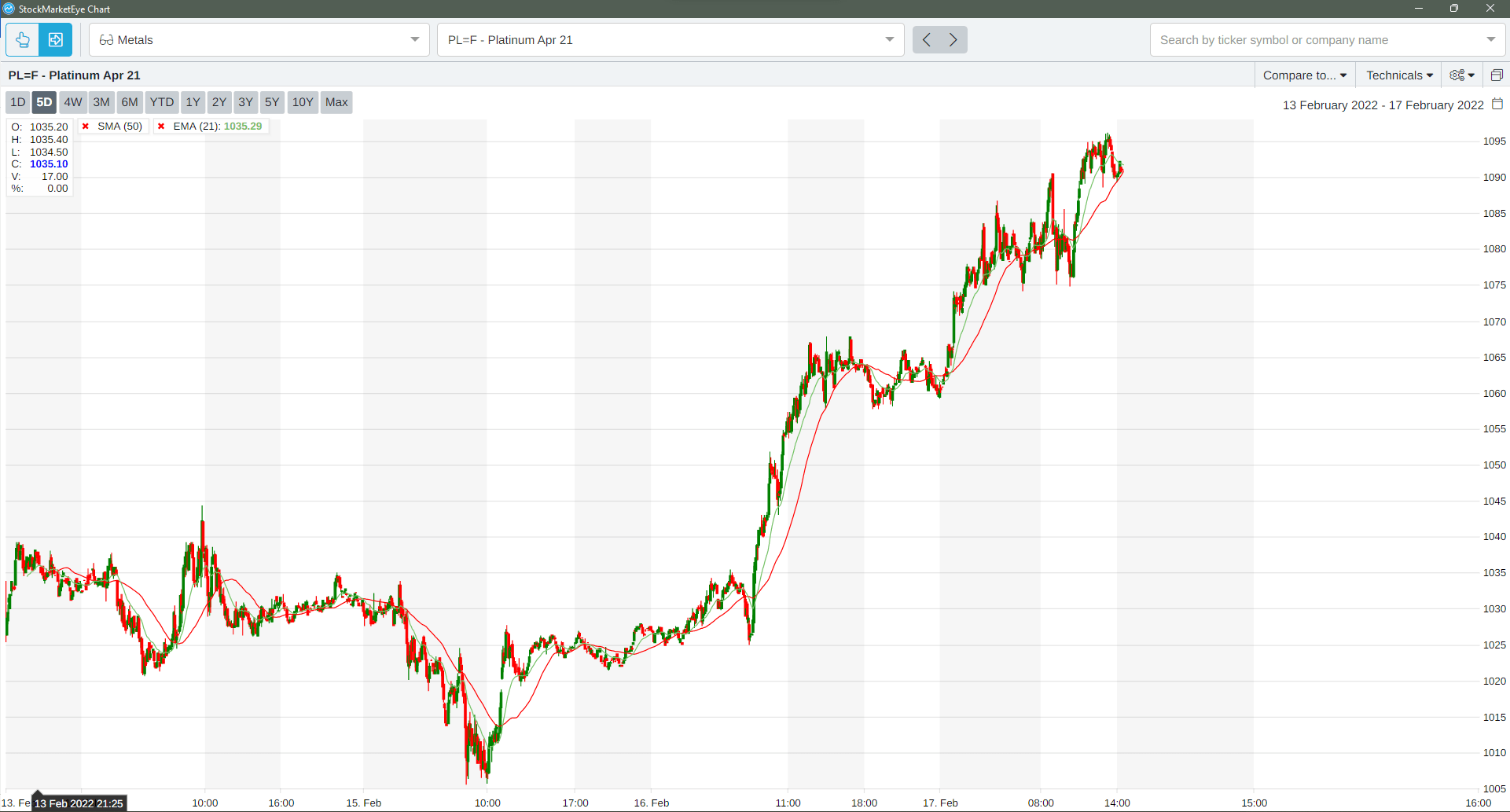 And again, you’re seeing quite dramatic increases in the price of what are called platinum group metals (PGMs). Now PGMs are only found in a few parts of the world but they’re very important to the global economy. No. 1, because they are used, as I said, in the production of catalytic converters, which helps to reduce emissions from conventional automobiles. Now, a lot of people have thought, well, because electrical vehicles (EVs) are going to become so popular in the future, maybe it’s not a good time to invest in these metals because they’re really not going to be in demand in the future. Well, there are arguments that these metals could play an important role in the EV sector, particularly with alternative battery technologies. But let’s leave that for another day. Critical thing is that the global geopolitical situation means that you could potentially benefit in the short term by investing in companies that produce these metals. Why is that?

The Top Producers of Palladium

Here’s a chart that shows the world’s biggest palladium-producing countries. The U.S. and Canada, on the left-hand side and on the top right-hand side, Russia is another, Zimbabwe and South Africa where I am that beautiful Y front flag as we call it is down there: 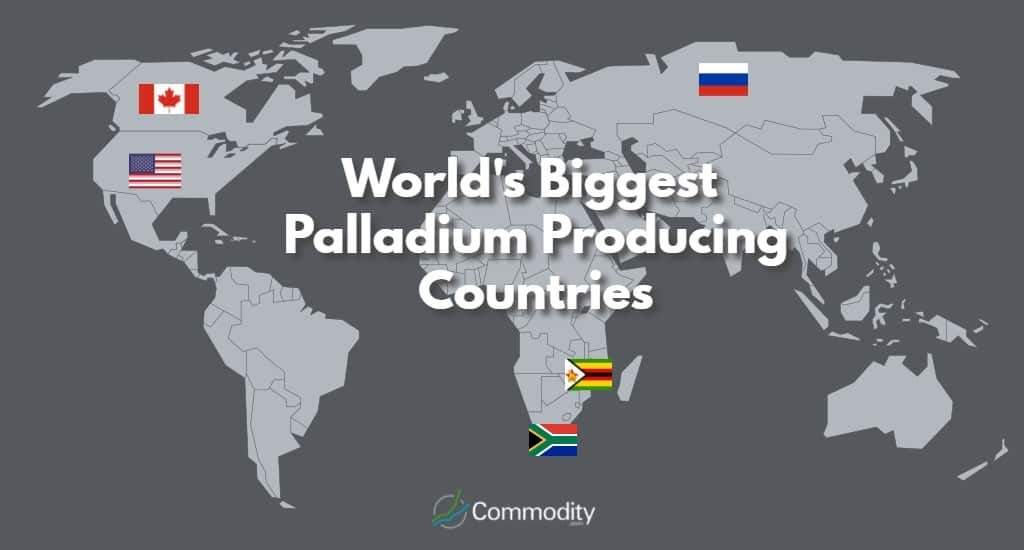 Now, why do I show you that? Well, here’s a chart that shows production of palladium and platinum:

Let’s start with platinum on the right-hand side, South Africa’s 78% of world platinum production, Russia’s 13%, others pretty much minimal. Now what about palladium? Palladium is the one that everybody’s interested in. Well, Russia produces 44%, South Africa 37%, USA 6%, others lesser. But the key thing is that as you’re going to find out that South Africa and Russia production is linked together. And if Russia invades Ukraine, that 44% of world supply might disappear overnight thanks to sanctions. Now, what would that mean for you?

If you were to invest in palladium-producing companies or even palladium futures, if you manage to find a way to do that? Well, let’s start with what’s happening here in South Africa.

Here’s a picture of Table Mountain taken from Table View, it’s a little suburb up on the west coast. I was there the other night, “having a jol” with some of my friends as we call it in South Africa. And some of you asked to know where I live. 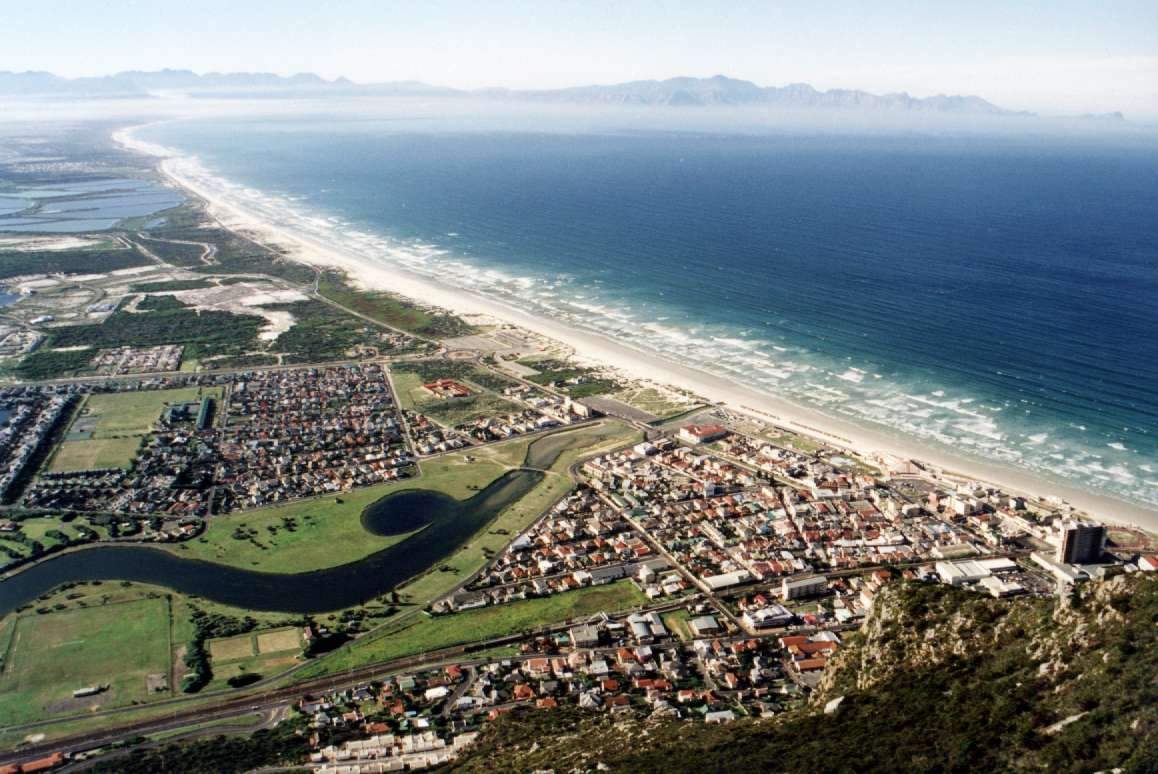 Well, my house here in South Africa, is in that cluster of houses on the bottom right-hand quadrant of the picture. I’m not going to tell you exactly which one, because somebody might want to shoot a missile at me, if I miss a stock pick and lose money on it. But anyway, I’m down there and here is a picture of my house taken from the balcony: 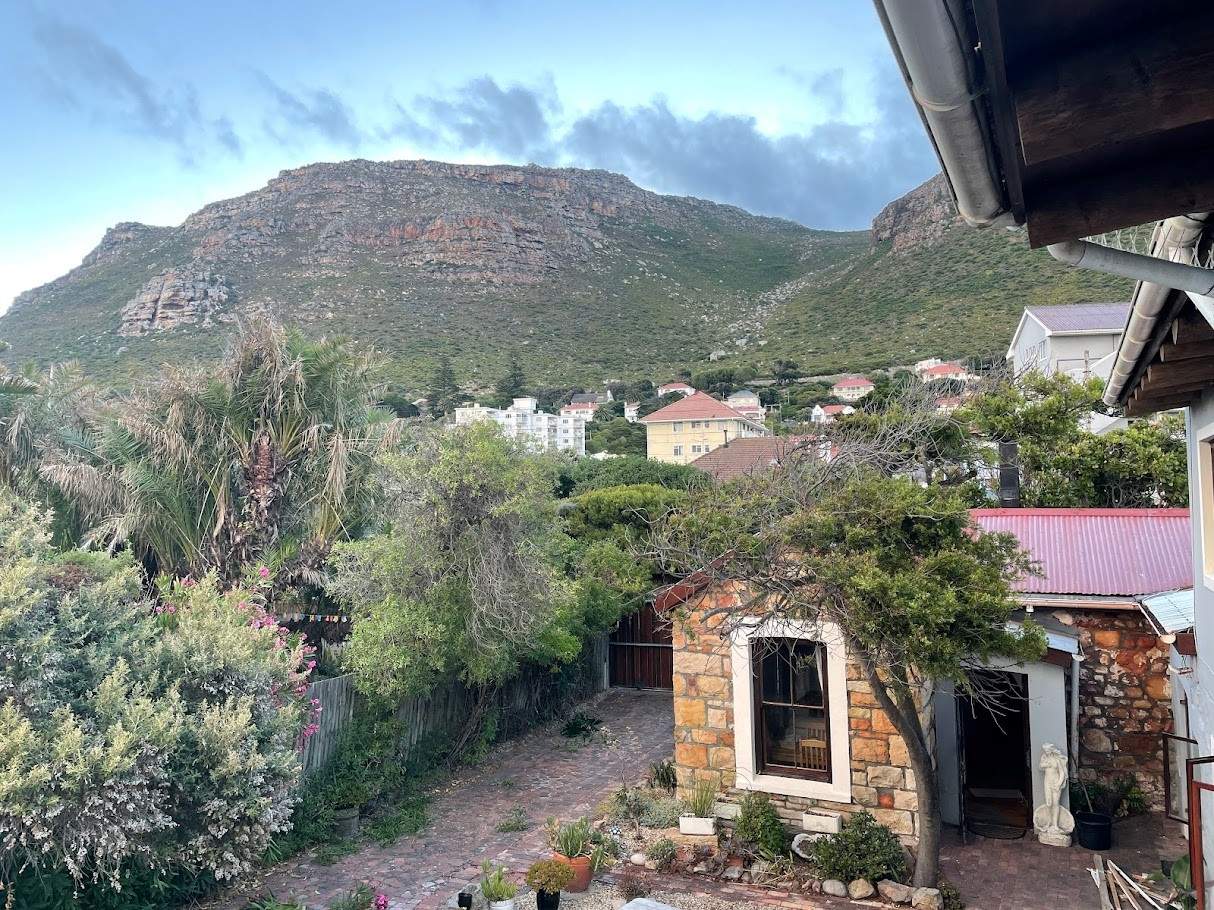 Some of you asked to see it and there it is. So that’s where I live. Now why am I going through all this? Well, it turns out that some of the world’s biggest producers of palladium are right here in South Africa and now is a brilliant opportunity to buy them as a short-term play on geopolitical conflict.

Now here’s what’s likely to happen… We know that over the last couple of weeks, there has been a lot of back and forth between the United States, NATO and Russia, about the situation in Ukraine. Essentially the argument that the Russians are putting forward is that they do not want the Ukraine to become part of the NATO sphere of influence. They don’t want NATO and American weapons to be based in Ukraine because it’s right in their underbelly. Now, whatever you think of that argument, the key thing is that if the Russians do decide to undertake military action against Ukraine, not only would it be a complete break with basically the whole world order that has existed since World War II and the end of the Cold War, but it would also result in probably massive sanctions against Russia, which would include cutting off their export ability or their ability to export things like palladium.

Now who’s one of the biggest producers of palladium in the world besides Russia?

The Company That Wins the “Palladium”

Well, it’s a company called Sibanye-Stillwater (NYSE: SBSW). It’s called Sibanye-Stillwater for two reasons. One is that the Sibanye is their key mine up in Rustenburg, which if I point roughly in that direction is where the mine is. Several thousand kilometers up that way. But also because Sibanye-Stillwater’s management, led by the inevitable Neal Froneman, bought the Stillwater mine in Montana, which is North America’s biggest producer of palladium and also platinum. And those two mines, basically the Sibanye mine, the Stillwater mine, are one of the biggest sources of palladium other than Russia. Now, if Putin invades Ukraine and sanctions emerge or slapped on Russia, I predict this company is going to go crazy.

Now here’s one of the key things about companies like that. They tend to be in a sense seen as commodity cycles. They tend to be seen as companies which benefit from the growth of the global economy. So they go up when the global economy is going up, they go down when the global economy is going down. They also tend to be seen as counter cyclical against a dollar. So there are different ways that you can play these things. But one of the things that you can very rarely do, but which we can do right now is potentially to invest in them, in the anticipation of a sudden supply shock on the side of palladium. Now here’s a chart that shows Sibanye-Stillwater: 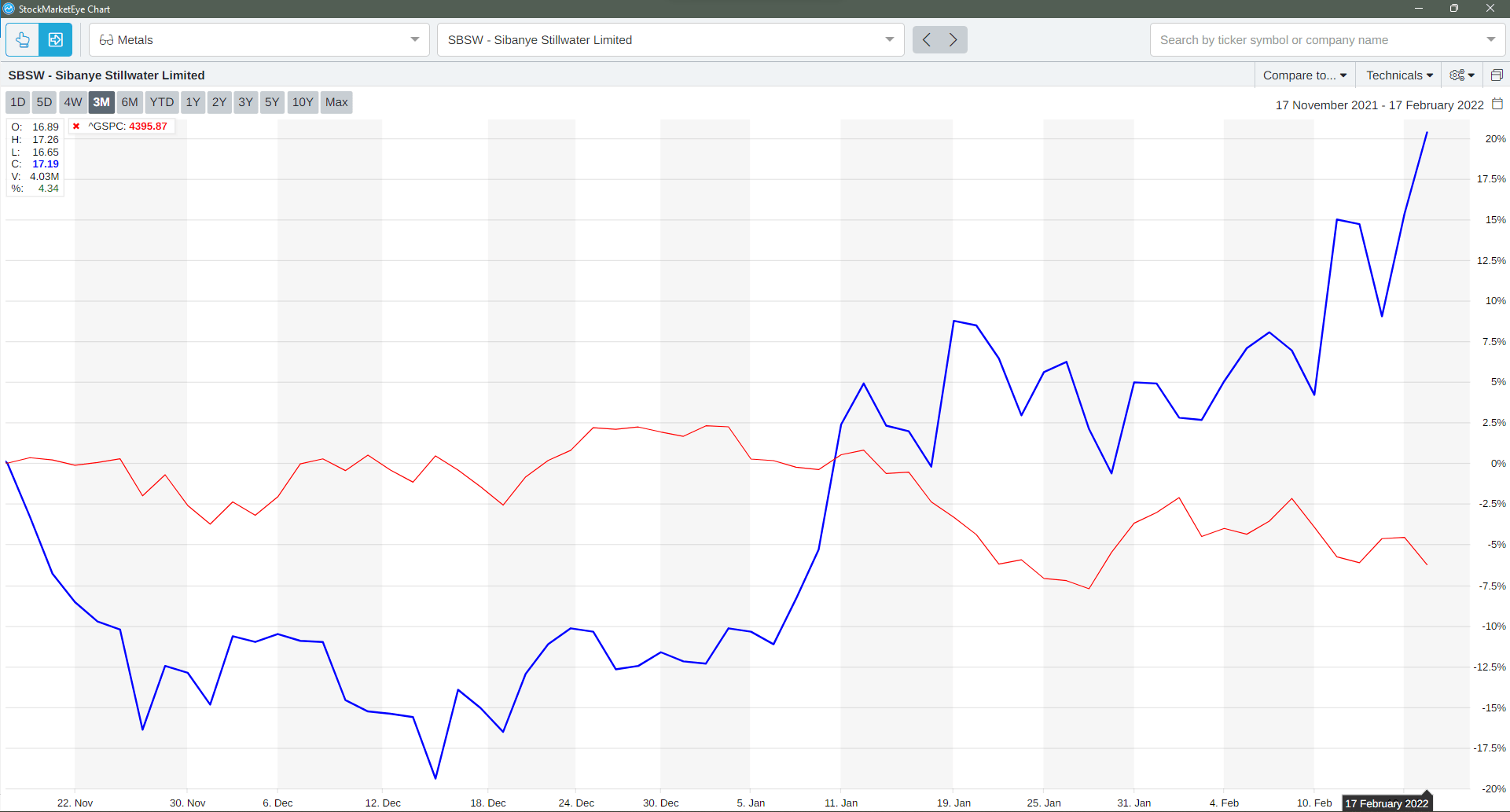 It goes back to its three months, but as you can see from mid-January when the Russian noises began to increase, when it became clear that there was something going to happen, potentially in Eastern Europe, the company’s stock took off. It has risen dramatically since then.

The red line of course, is the S&P 500. So if you’d invested in this stock at the beginning of the year, you’d be up very substantially. You would’ve beaten pretty much anything else in the market these days. Now here’s a chart that takes us a little bit further back. It goes back actually six months: 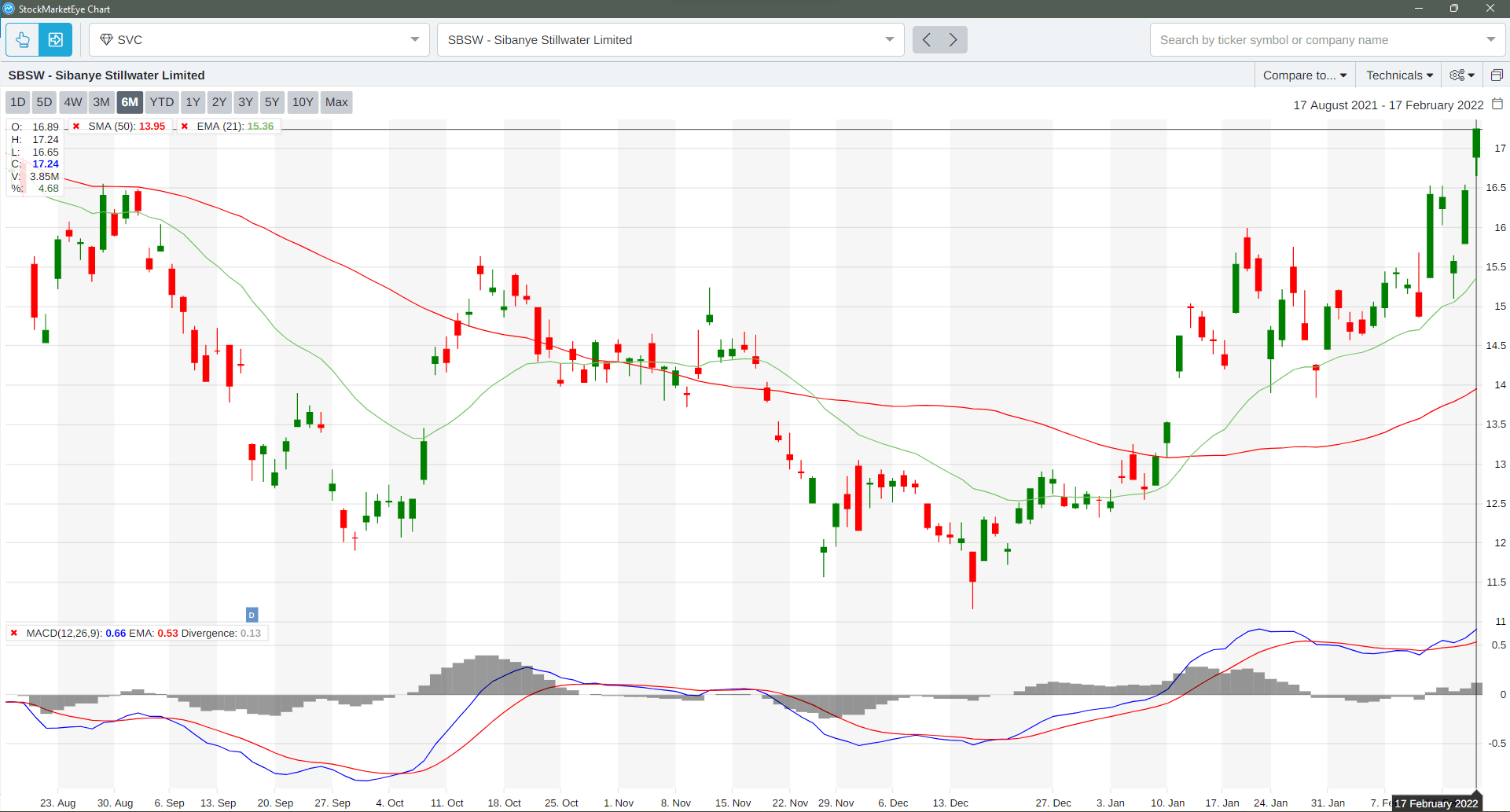 And the reason I’m showing this is because the momentum for this stock has increased very significantly. That’s the 21-day exponential moving average in green has moved well above the 50. At the bottom, you can see that the MACD, moving average convergence data, is very positive at the moment.

Now, it’s not rare that I give away or recommend a specific stock in my newsletters. And of course, I’m doing this as a free recommendation to everybody. So don’t blame me if it doesn’t work out. But I think right now is a very, very good time to be looking at Sibanye-Stillwater as a potential beneficiary. If Russia does invade Ukraine, I think this is a very good opportunity to grab that stock. You could make very, very good short-term gains simply because they are the only other place in the world that you can get large amounts of palladium, other than Russia. If the Russian supply disappears, this company could take off like a rocket and so could your portfolio, if you buy it now. Now not promising anything. And again, I don’t do this very often, but I think this is a good opportunity. And since I’m here in South Africa, since it’s a South African company, I’m very patriotic with this country. I think it’s a good time to consider doing that.

Now, one of the ways you could do it is to buy call options. I haven’t looked at the options market on SBSW’s stock, but I bet the action is very interesting at the moment, you might be paying a very high premium because clearly, I’m not the only person in the world who’s thought of this play. But I think buying SBSW and holding it for over a two or three month time frame could be very lucrative. Anyway, that’s me for this week. I will talk to you again next week, by which time I will be back in the United States, I’ll see you then. 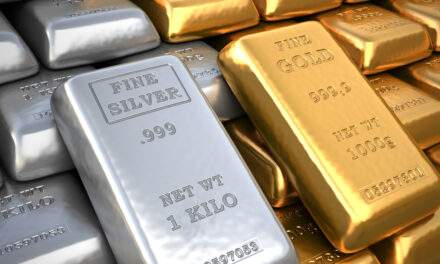 These 2 Assets Won’t Protect You From Inflation