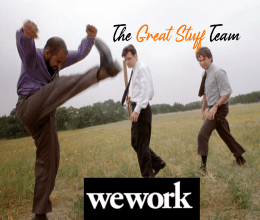 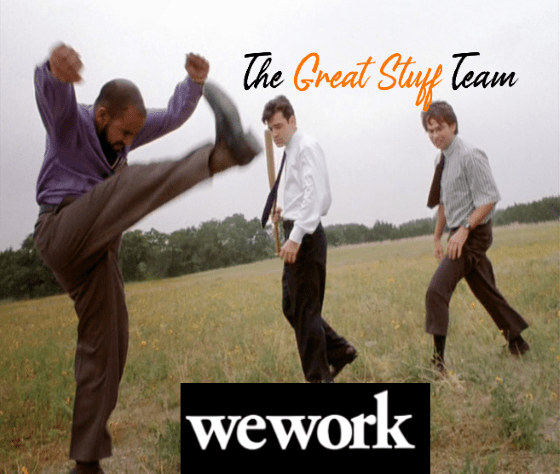 Sometimes I cannot take this place. Sometimes I need some office space.

For all you non-Korn-fed Great Ones out there who also need some office space … WeWork is back. (Back again.) The would-be WeCompany has reentered the chat, going public via a SPAC after its ill-fated IPO imploded almost two years ago to the day.

You’ve heard of software as a service. But WeWork offers space as a service — and no, not the “billionaire rocketeer” kind of space.

The company leases flexible (read: expensive) office space. That’s it. Throw in some minimalist desk furniture and a Keurig — wham-o, you have a WeWork.

I hear that some of said spaces are better-run than others, but that involves many remote workers leaving their already comfy living room offices, so…

Since going public any other way would draw the same investor and legal scrutiny as its failed IPO, WeWork merged with a SPAC — BowX Acquisition (Nasdaq: BOWX). Besides, a traditional IPO is too pedestrian for such a highfalutin and visionary company like WeWork, now, isn’t it?

Announced back in March, the SPAC deal values WeWork at about $9 billion — way off from the $47 billion that SoftBank valued it at. The giant Japanese fund still has a majority stake in WeWork post-SPAC … at least until its share lockup period is over in one year.

WeWork has shed CEO/We hype-man Adam Neumann — the shared-work-environment evangelist incarnate. In his stead is an actual real estate executive, Sandeep Mathrani, which shows WeWork’s new management has at least given up its “we’re a tech company!” façade.

While the uber-idealist tech-fawning might’ve died down for WeWork’s second time ‘round the market maypole … the memory of its seamy past remains.

Whatever turnaround play Mathrani has in mind to capitalize on WeWork’s “brand” must also overcome the fact that WeWork’s brand is also synonymous with massive losses, SEC scrutiny, no path to profitability and Neumann’s alleged self-dealing — leasing properties he owns to the company while borrowing heavily against the stock. 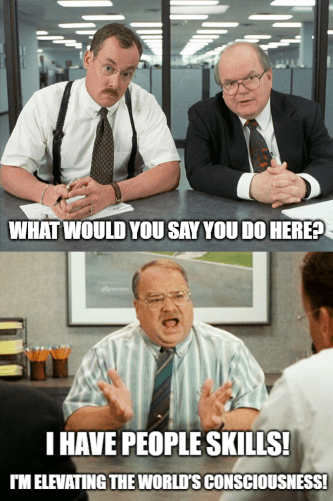 But that’s like … the past, man! Things are different now, apparently. With the labor market all topsy-turvy, WeWork could make bank! Or so I’m being told…

WeWork touts that it can “shave real-estate costs by around 25% per employee” when companies switch to its loosey-goosey office space system. It would sound great if WeWork hadn’t previously bragged up its 66% cost savings.

But hey, that’s back when it was still “elevating the world’s consciousness.” Never mind that the only thing elevated is the world’s real estate prices…

WeWork sold off a bunch of properties to cut down on its cash burn … well, after paying Adam Neumann $1.7 billion to go away. Its lower footprint should help the company adjust to lower demand for office space, right?

WeWork said its occupancy rate fell to 55% as of June 1 from 58% the same time last year because of a decline in demand primarily driven by the effects of Covid-19.

So, let’s get this straight…

WeWork saw declining demand this past year during the Great Reopening hokey pokey — a time when (some) folks returned to their offices and others continued on with the remote work life. By summer, more people were comfortable going outside — and maybe even working with their teams again.

Yet, during all this time that WeWork could’ve thrived amid the need for flexible office space … WeWork’s occupancy still fell.

WeWork’s own investor materials show this occupancy entirely underpins the company’s path to probability, with a 70% occupancy bringing WeWork to … drum roll … breakeven.

Think about that: WeWork needs to get its occupancy rates up by 15% just to turn profitable — never mind actually making substantial returns for investors.

It’s no wonder why WeWork suddenly decided to crawl back out from the WeWoodwork it was hiding in. Could it be for — gasp — a fresh injection of that sweet, sweet cash supply? WeWork’s song truly remains the same…

WeWork is still losing billions of dollars every year. Its last filing showed a $888.8 million net loss for last quarter alone. And with rent and real estate prices at stupid highs, I have to wonder how WeWork will ever make real money.

It had trouble before the real estate boom, and things have only gotten worse since. I’m not saying WeWork will fail tomorrow … lesser companies are surviving right now.

WeWork’s only way to survive is to capture lucrative businesses’ needs for flexible work environments — especially with the new normal brewing in the labor market.

But apparently, WeWork has trouble doing just that.

The work-from-home movement, the “Great Resignation” (people quitting all over the place for various reasons), the ongoing complications of pandemic life — these are forces that could potentially work in WeWork’s favor.

But it’s these same uncontrollable, now-unpredictable variables that could also be WeWork’s downfall as it struggles to literally keep the lights on.

When you combine that uncertainty with all the company’s prior baggage … all the storm clouds brewing in the broader market today … I’m not anywhere near gung-ho about WeWork Part 2: The Shared-Office Boogaloo.

WeWork is neither a “we,” nor has it ever “worked.” Just like with WeWork’s first jaunt into the public market waters … I can’t in good conscience recommend it.

And above all, remember what Great Stuff told you two years ago at the start of this very saga:

On Tuesday, October 26 at 8 p.m. Eastern Time — we’re going live with our first-ever Great Stuff special event. And, trust me, you don’t want to miss it!

My guest for this one-of-a-kind event is none other than Keith Kaplan, CEO of TradeSmith. Together, we’ll show you the powerful strategy that could let you unlock even bigger gains from The Final Run Up — as much as 6X bigger — from stocks you already own. 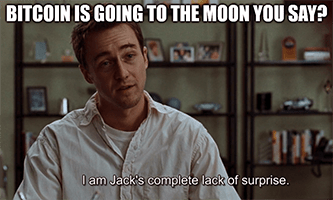 Don’t think we didn’t see your email regarding bitcoin’s bounce, Aron. We just didn’t have much else to say about the crypto that Great Stuff hasn’t already touched on recently.

As we mentioned the other day, Bitcoin’s boon is directly tied to the new bitcoin futures ETF that gives investors exposure — albeit very risky exposure — to the cryptocurrency’s underbelly. If you want more info on futures trading, you can read up on it right here. Just … be careful and don’t get any impulsive ideas.

Bitcoin futures aren’t for everyone, nor should they be. But that doesn’t mean the derivatives ETF isn’t something to celebrate. More money flowing into crypto products means more mainstream acceptance of Bitcoin and other altcoins in the market. And it gives investors hope that a direct-exposure bitcoin ETF is somewhere off on the not-so-distant horizon.

So, good news all around. Investors reacted according to the optimism, which is why bitcoin rocketed like a moonshot when the market opened for trading yesterday. All told, it’s a pretty open-and-shut case.

But don’t let Jack’s complete lack of surprise ruin your celebration … especially if you managed to snag some BTC back in July when it was trading in the $30,000 range.

Seriously, did any of you Great Ones hit the jackpot and snag some Bitcoin on the cheap? Are you planning your early retirement yet? Let us know: GreatStuffToday@BanyanHilll.com.

You’ll Have No Positivity From Me, AT&T 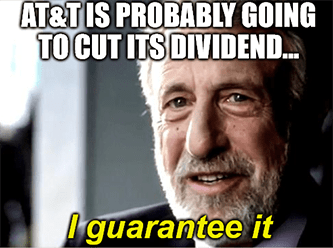 We’re right in the thick of earnings season, so we’d be remiss not to mention some straight-up earnings announcements. Brace yourselves … numbers are coming. (Noooooooooo!) Shush. It’ll all be alright.

AT&T (NYSE: T) started to teeter this morning after releasing its latest earnings report. While the telecom company experienced rising growth for its phone and internet services as well as HBO and HBO Max streaming, third-quarter revenue came in lower than Wall Street’s expectations. And we all know how much Wall Street hates to be disappointed.

Here’s a quick rundown of the important numbers:

Overall, it certainly wasn’t the worst earnings report we’ve ever seen. Too bad AT&T’s own investors weren’t moved by any of the positive news: T stock has been in freefall since the market opened this morning.

Why the tough crowd? For starters, AT&T has underperformed its competitors throughout the pandemic and even considered cutting its rather generous dividend yield. That’s a big no-no for people in the passive income party.

And then there’s AT&T’s weird on-again, off-again relationship with Time Warner, which ain’t nobody got time for … least of all its loyal fanbase. Will AT&T ever earn back that invaluable investor trust after so many fits and starts? Tune in next quarter to find out, but don’t get your hopes up… 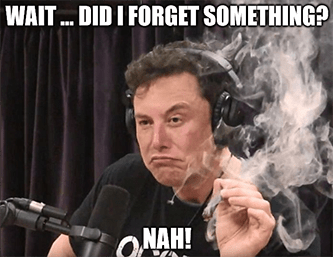 All right, that’s a bit of an exaggeration. But Musk was noticeably absent for Tesla’s (Nasdaq: TSLA) latest earnings call, which marked the first time the Muskman skipped out on Wall Street’s quarterly reporting ritual.

Don’t worry, y’all … Elon will live to Tweet another day. You can release that collective breath you’ve been holding.

Back at the ranch, Tesla’s earning’s call was considerably drier than normal without its fearless leader. However, the electric vehicle (EV) maker gave TSLA investors plenty to munch on: Third-quarter revenue hit $13.8 billion, just shy of analysts’ $14 billion estimate.

Meanwhile, Tesla doubled its deliveries year-to-date despite the ongoing semiconductor shortage, which continues to hamper EV production operations. When asked how production capacity will fare in the future given the ongoing chip crisis, Tesla CFO Zachary Kirkhorn answered with this helpful statement:

In other words, Tesla has no idea what kind of production output it will have in the future … and it’ll remain that way until this supply chain crunch gets under control. Play me a song I haven’t already heard a million times before.

Hopping & Bopping To The Croc-odile Rock

Name a better duo than comfy clogs and consumer casualization brought on by an 18-month-long pandemic — I’ll wait.

There’s a reason why Crocs (Nasdaq: CROX) blew away quarterly earnings expectations this morning. Revenue is up 73% to $626 million from $362 million a year ago — and it’s not because of the 26 different color variety of Crocs Classic Clogs available online.

I know there’s at least one of you Great Ones out there rocking those Lime Zest monstrosities. Tell me, where did it all go wrong for you?

Anyway… You remember those supply chain catastrophes running amok across the land? Amok! Amok! Amok! Well, they aren’t affecting Crocs like some other big-wig companies I know:

Globally, our teams are managing through the supply chain disruptions to mitigate the impact on our business. Despite the temporary disruptions, we expect 2022 revenues to grow … fueled by the strength of our brand and consumer demand globally. — CEO Andrew Rees

I guess everyone who said they’d “never be caught dead wearing Crocs” had a change of heart when the rubbery sandals met the road … or something like that. Either way, Crocs stock is up almost 6% today, which should put some pep in CROX investors’ step.

Finally, I know the week is almost over, but if you have any lingering, burning questions … go see a doctor. But if you have random stock market questions or rants, share your thoughts with us at GreatStuffToday@BanyanHill.com.

You never know — your random tomfoolery could wind up featured in tomorrow’s Reader Feedback! 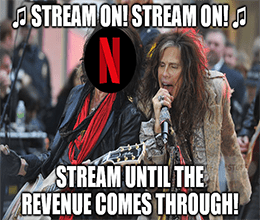 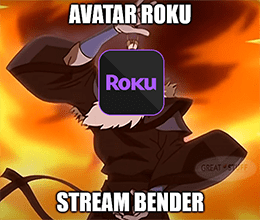