Home » Social » Voting Protects Our Rights and Ourselves

Voting Protects Our Rights and Ourselves

I was first elected to the U.S. Congress from Maryland’s Chesapeake Bay district in a 1973 special election. A local county newspaper editor disdained both candidates, but generously concluded I was the least harmful.

He entitled his reluctant endorsement: “Hold Your Nose and Vote!” That could well be the national motto for Americans in 2018, yet another disappointing election year.

Frederick Douglass, my fellow Talbot County, Marylander, and a leading black American abolitionist, wrote: “Find out just what any people will quietly submit to and you have found out the exact measure of injustice and wrong which will be imposed upon them.”

For much of the last century, both major U.S. political parties have competed in testing Douglass’ theory — and too many Americans seem oblivious to this charade.

We hear laments about the need for “bipartisanship” in politics. But many of the most damaging acts inflicted by Washington, D.C.’s political elites were enacted on a fully bipartisan basis.

Included on this infamous bipartisan list is the invasion of Iraq, and most of the post-9/11 civil liberties abuses of the Bush-Obama era (which President Donald Trump has accepted), including the onerous Patriot Act; all results of a continuing coalition of political convenience that imposes “injustice and wrong.”

Your Vote Is Your Voice

The late cartoonist Walt Kelly created Pogo, a sensible, sensitive possum, as the lead character of his long-running (1948-75) daily comic strip bearing the same name. Syndicated in hundreds of U.S. newspapers, it was set in Georgia’s Okefenokee Swamp, where social and political satire was voiced by its animal characters.

Indeed, Pogo gained such a cult following that in 1956 a boomlet developed when the possum mused about running for president. (I still have my “I Go Pogo” button with his furry likeness.) 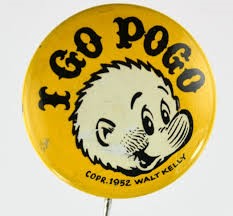 Perhaps the most quoted line ever to originate in a comic strip came from Pogo when the disgusted possum surveyed an environmental mess made by his fellow swamp denizens. He intoned: “We have met the enemy, and he is us.“

Walt Kelly was asked to explain what he meant by that.

He said that he had tried “to explain each individual is wholly involved in the democratic process, work at it or no. The results of the process fall on the head of the public, and he who is recalcitrant or procrastinates in raising his voice can blame no one but himself.”

I disagree with some of my libertarian friends who argue that voting makes no difference and is an endorsement of a failed system.

Even if we don’t vote, we get the government the majority who register and vote imposes on all of us. Humorist Will Rogers put it another way: “Be thankful we’re not getting all the government we’re paying for.”

We all should be concerned about the continuing destruction of our rights. All who qualify should vote to protect our rights and ourselves. Your vote is your voice — the only person who can silence your voice is you.

Unfortunately, too many Americans stand mute as freedoms die around them. Feeble public awareness needs to be converted into true understanding of events and into decisive action that offers true change and real hope.

My fellow Marylander, the late H.L. Mencken, once described democracy as: “The theory that the common people know what they want and deserve to get it good and hard.”

Look in the mirror now, and again on Election Day, Tuesday, November 6, 2018.

Ask yourself: Was Pogo correct? Have we met the enemy — and is that you?

Should You Lease or Buy Your Next Car?