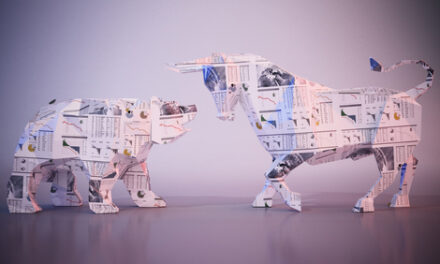 Another week, another round of Unusual Options Activity.

A crash on Monday… A rally on Wednesday and Thursday…

And like magic, at the end of the week, we’re right back to where we were a week ago!

That’s the magic a volatile market can create.

I talked about this on Thursday, how market volatility can whipsaw a trader around. It’s why we want to stick to key levels and profitable strategies in our trading — so we don’t give into the market emotions.

During this volatility, we also want to keep our eyes open for trades on both the upside and downside. Because even though stocks wound up nowhere last week, they spent the week making big moves.

So this week, we’ll kick things off with a few big-money bets traders were placing amid the volatility.

Two are bullish, one’s bearish, and they each could be right regardless of what happens in the overall market.

Bold UOA Moves From the Bulls and the Bears

These trades came as the stock dropped even more on Tuesday than it did on Monday, resulting in an 8% pullback from its September highs.

They’re looking for a quick snap-back rally of at least 10% over the next two weeks. That would get them back to breakeven.

It’s a bold bet. My only concern is the stock’s still weakening based on my “Profit Radar,” the Relative Rotation Graph. Lagging (in red) is the expected next area for the stock to go, which would signal a bit more of a drop from here. 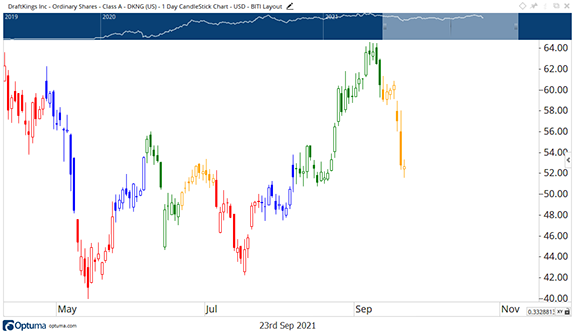 Watch it closely early this week. If we get a move above $55 per share, then I’d follow some of these bullish UOA moves.

Let’s not sugarcoat it… they’re looking for the stock to do a complete 180 over the next two weeks. They need the stock to pop double digits before they can lock in a profit.

It just so happens this coincides with Best Buy having — for the first time ever — actual stock of the latest gaming consoles. Consoles that some kids, mine in particular, have been eyeing since last Christmas.

This will benefit video game makers like Activision Blizzard big time, as consumers rush to get the latest games for their brand-new consoles.

It’s going to be a strong holiday season for them if these consoles can stay in stock, and after the sharp drop the stock has seen, a quick bounce almost seems inevitable. This looks like a decent bet. 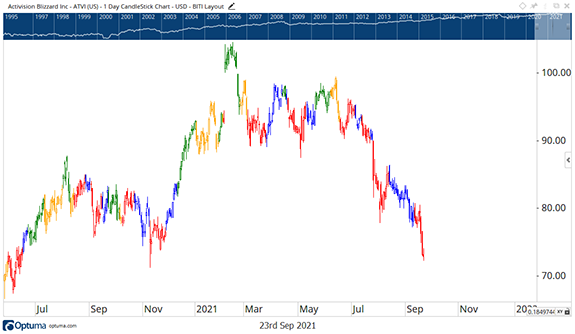 Since we had a volatile market last week, these trades are going more or less with the flow that we were seeing — more selling pressure.

But, when we look at the price charts, it’s clear a support needs to break before this trade will become a big payday.

This unusual activity is in two parts. But it’s still likely one trader, because they used two different expirations, but kept the strike prices the same.

And for them to make any money, they need to see a 15% decline in the stock.

The good news is they have plenty of time, compared to those bullish bets. With two to three months left, a 15% move can happen. They just have to be right about the direction.

Following the wedge pattern will be key to knowing when the breakout occurs and this move will be in play.

Until then, I’d watch it patiently. 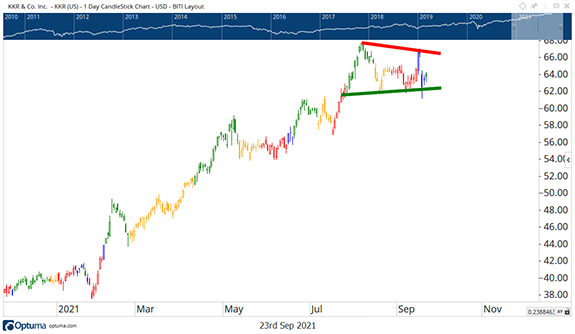 These big-money bets are great to watch… Unusual options activity helps us track and determine the best possible trades.

But remember, these traders likely have money to burn. That’s why they can afford to make big bets like this.

That’s why we never risk more than we can afford to lose on any given trade.

Even though the market has shown some bounce from last week’s dip, I don’t think the volatility is over yet…

So continue to watch both bullish and bearish trades like we highlighted today, and be selective in your positions.

Chart of the Day:
New Highs Ahead for
This “Forgotten” Stock 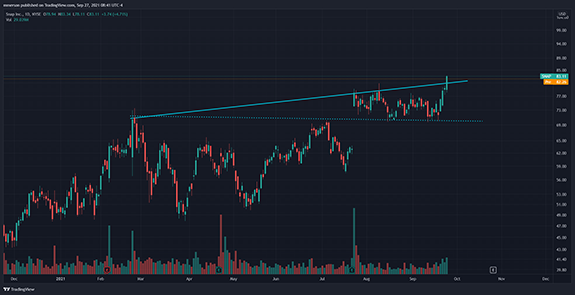 Remember Snapchat? I do… sort of. It was absurdly popular for a long time, but it seems like TikTok completely ate Snapchat’s lunch over the past couple years.

Yet that hasn’t stopped SNAP stock from being a market outlier lately.

While the rest of the market wound up nowhere, as Chad pointed out, SNAP spent the last week quietly racking up gains and trending toward new highs. Then a strong breakout on Friday, with similarly strong volume, put it at new all-time highs with ease.

Now, you might be tempted to rush out and buy SNAP stock or get long some call options. But regular readers will know what I’m about to say…

When you get these huge breakouts, it’s common for the stock to come down and retest the former resistance line as support. That’s exactly what happened with SNAP’s earnings breakout in late July. The price opened well above the former resistance (blue dotted line), turning it into support, and then revisited that support line in the weeks that followed.

The trade now, in my view, is to bank on SNAP revisiting its new support around $81 in the coming weeks. But that’s not a huge move from today’s levels — only about 2%.

So instead of trying to trade this small down move, it’s likely better to use that as an entry to get long on a continued run higher. 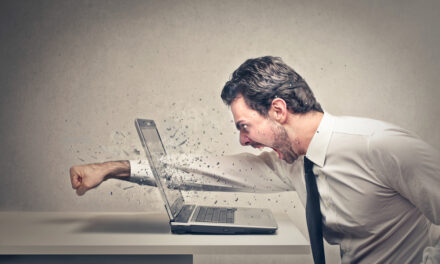