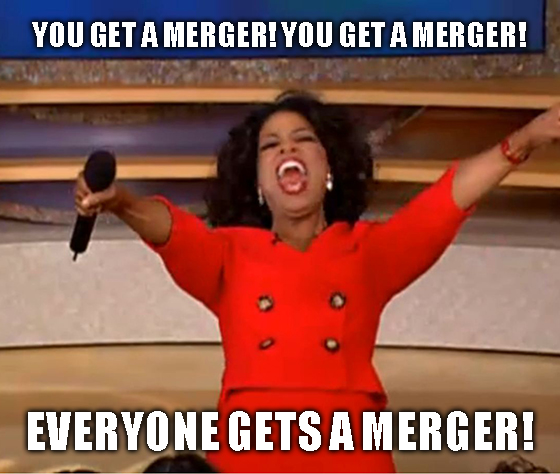 Corporations are gobbling up oversold competitors like your grandmother’s homemade biscuits. And they aren’t going easy on the gravy, either.

Headlining this merger Monday is The Charles Schwab Corp. (NYSE: SCHW), which has officially agreed to buy TD Ameritrade Holding Corp. (Nasdaq: AMTD) for $26 billion in an all-stock transaction. If this is new information to you, check out Great Stuff’s recent rundown of Schwab’s master plan.

Next up, Novartis AG (NYSE: NVS) announced that it’s acquiring The Medicines Co. (Nasdaq: MDCO) for $9.7 billion. Novartis is angling for Medicines’ experimental cholesterol treatment drug inclisiran — which has shown it can lower bad cholesterol in even hard-to-treat patients.

The acquisition also gives Novartis another key Medicines cholesterol drug, Repatha, which is expected to hit blockbuster status by 2021.

It’s like Novarits just made a $9.7 billion bet on the world getting fatter. Hmmm…

Finally, LVMH Moët Hennessy Louis Vuitton (OTC: LVMUY) is adding yet another luxury brand to its stable. The company finally reached a price that Tiffany & Co. (NYSE: TIF) felt was acceptable: $16.2 billion, or $135 per share. Tiffany rejected LVMH’s earlier bid of just $120 per share back in October.

I wonder if LVMH will change its name to LVMHT Moët Hennessy Louis Vuitton Tiffany … we’re bordering on the ridiculous at this point.

There’s quite a bit of optimism running rampant on Wall Street today.

Last week’s U.S.-China trade war love fest helped boost that confidence heading into the weekend, and today’s round of corporate mergers is inflating it further.

Days like today are exactly why you don’t want to be in full bear mode, despite continued warning signs that a correction is in the cards. There are always pockets of opportunity. Today, those pockets are running deep.

The bottom line here is that you need to keep your head. Don’t buy into the hype on either side of the bull/bear argument and remain prepared for anything.

Lucky for you, Banyan Hill expert Charles Mizrahi knows all about keeping a level head when investing. His groundbreaking Alpha-3 Approach is a research system that can be beneficial for everyone, regardless of how much money you have, your investment acumen or your risk tolerance.

So, if you’re ready to leave the hype behind, get started with Charles Mizrahi’s Alpha Investor Report service. 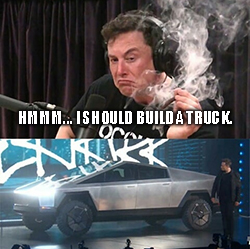 Elon Musk is at it again.

The Tesla Inc. (Nasdaq: TSLA) CEO tweeted out some astounding figures over the weekend, claiming that the new Cybertruck received 200,000 orders. I didn’t know there were this many Tesla fanboys with a spare $100 lying around.

Seriously, the Cybertruck looks like that truck I drew in third grade. Maybe that’s the real appeal? We’re all just longing for our childhoods, and Tesla has found a way to tap into that longing? (Naaah … couldn’t be.)

Still, we need to take this claim of 200,000 orders with a grain of salt. The $100 reserve price is far below the $1,000 reservation price for the Model 3, and a far cry from the $2,500 deposit needed to secure your place in line for the Model Y. In other words, these are soft orders for that big metallic trapezoid on wheels.

We need more actual data before we pass judgment, but that lack of data isn’t stopping TSLA from rallying today.

Meanwhile, Musk also tweeted out info on his new Hot Wheels wannabe design choice. Specifically, the Cybertruck (I’ll never get used to that name) looks like a poorly rendered Pontiac Aztek because it’s made of 30X cold-rolled steel.

Typical vehicles are made of aluminum, which can be bent and pressed on all modern automobile manufacturing equipment. But try pressing the Cybertruck’s steel into an eye-pleasing form, and you break your fancy tools.

“Reason Cybertruck is so planar is that you can’t stamp ultra-hard 30X steel, because it breaks the stamping press,” Musk tweeted.

The Bad: Anarchy in the U.K. 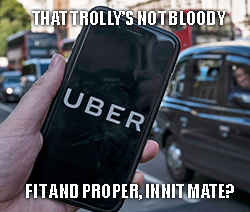 As of today, London is no longer calling Uber Technologies Inc. (NYSE: UBER). The company has been stripped of its ability to operate in the city.

In short, TfL said that Uber was “not fit and proper.”

I don’t know if you’re familiar with the intricacies and polite formalities of the Queen’s English, but “not fit and proper” is tantamount to saying: “Your service is shite.”

Uber called the decision “extraordinary and wrong,” and promised to keep operating in London to support its 45,000 licensed drivers and 3.5 million riders.

Still, TfL’s decision — and the threat that it may spread to other European cities — has investors worried. 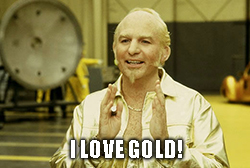 Not everyone is happy this merger Monday. Kirkland Lake Gold Ltd. (NYSE: KL) investors have tanked the company’s shares following news of a $3.7 billion acquisition.

Kirkland is buying competitor Detour Gold Corp. (OTC: DRGDF) in an all-stock deal. The company believes the acquisition will expand its operations in northeastern Ontario and generate pretax savings of $75 million to $100 million per year.

It all sounds good, especially with gold prices climbing about 20% in the past year. However, Kirkland investors have sent the shares down more than 15% on the news.

It’s a bit understandable. After the acquisition, Kirkland shareholders will only own about 73% of the combined company, with Detour Gold shareholders owning the remaining 27%.

A $1 billion short bet on the market?

It’s more likely than you think. On Friday, The Wall Street Journal reported that hedge fund Bridgewater Associates did exactly that. Almost immediately, however, the fund’s founder and co-chairman Ray Dalio denied the report.

Well … he kinda, sorta denied and confirmed it. Dalio didn’t deny that Bridgewater made the $1 billion bet — with put options that expire right after the Super Tuesday primary — but he did say that the Journal misrepresented the bet.

“We have no positions that are intended to either hedge or bet on any potential political developments in the U.S.,” Bridgewater said in a statement.

The disparity between the actual $1 billion bet and the statement led Banyan Hill expert Michael Carr to quip:

An interesting aspect of this news is that the put options expire in March, as the results of the Super Tuesday primary are known. It’s almost certain we will know what the Democratic convention will look like after those primaries.

Impeachment history shows us that politics makes trends more volatile, so it’s clear he sees a downtrend. He might also be trying to move the market a little since his bet seems like a small winner if the market drops just 5% to 7%.

But I must be wrong about that, since large hedge fund managers would never talk their book and try to increase profits through CNBC appearances.

And remember, if you want more of Michael Carr’s wit and wisdom in your market research, you need to subscribe to Precision Profits now.

It’s the battle of the century!

In a battle that is sure to dazzle your eyeballs, The Walt Disney Co. (NYSE: DIS) is taking on Netflix Inc. (Nasdaq: NFLX) for the right to rule your living room TV.

You’ve heard me rant about the virtues of both companies, but today you’re getting a different view on the battle for your streaming dollars.

Charles Mizrahi has weighed in on the Disney versus Netflix war and the changing landscape of the streaming market. I urge you to check out his article on the topic: “Disney vs. Netflix: Which 1 Has the Edge in This Streaming Service Battle.”

Or, better yet, watch Charles’ latest video on the great streaming service battle:

And, when you’re done watching, don’t forget to sign up for Charles’ Alpha Investor Report. 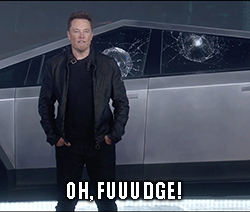