When it comes to so-called emerging markets, I walk the walk. I have investments in South Africa, and I’m considering more in South America.

I say “so-called emerging markets” because they’re not really emerging. They’ve been around for a long time. South Africa, for example, has played a key role in the global economy since 1652.

Consider Turkey. The region has been at the center of the world economy since ancient times.

After the collapse of Rome in the fifth century, the Byzantine Empire was one of the wealthiest and most powerful places in the world, with only China to rival it. When the Ottomans took over in the 15th century, their power made Europe quake in fear.

There’s a crucial difference between those days and now, of course. When it was the seat of empires, Turkey’s currency was the “gold standard” in international trade.

Those days are long gone … and modern Turkey’s currency woes are going to affect people like you and me dramatically.

Turkey Is in a Classic Downward Spiral

I have a couple of foreign exchange alerts set up. Whenever one of them triggers, I send some U.S. dollars to my account in South Africa to take advantage of the favorable rate.

Lately I’ve been doing that more often than usual … and it’s all because of Turkey.

Turkey’s currency is in freefall. The lira fell by 20% against the dollar last week. Monday morning it fell another 6.5%.

But even before the current crisis, the lira was the world’s worst-performing currency, dropping by half against the dollar in the past 12 months.

Turkey is a classic case of the vulnerability of midsized open-market economies. It’s running a current account deficit since it imports more than it exports.

Private and public sector debt is high, with $350 billion of it borrowed in dollars from foreign banks to take advantage of low interest rates. Inflation is over 15%, five times the average for the country’s peers.

Much recent borrowing has gone into property and construction, leaving borrowers and local banks at risk of default.

Making matters worse is the country’s president, an authoritarian nationalist who named his son-in-law as finance minister. He has instructed the central bank to issue as much credit as needed to Turkish banks so they can maintain the foreign currency reserves required by international banking conventions. And he refuses to raise interest rates.

That is putting more pressure on the lira … a classic downward spiral.

But Turkey’s problems are about to become yours … and an opportunity for foreign investors like me. Here’s why.

If Turkish borrowers begin to default on their loans, those banks will suffer just as they did when Greece, Italy and other countries faced similar problems after the financial crisis of 2008. 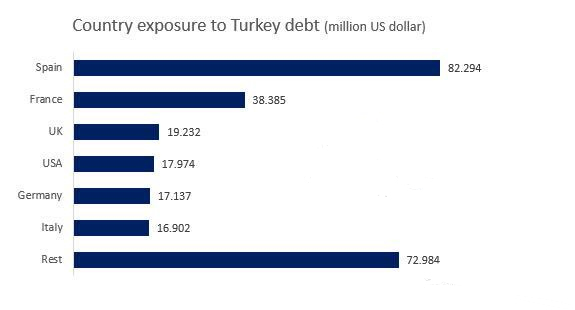 The threat to European banks has already sparked a global stock market sell-off.

Foreign market troubles are a threat to U.S. markets as well. Although I’m writing this before the markets open, I fully expect to see steep losses today.

And as always, Turkey’s problems are having an immediate impact on other midsized economies. The Russian ruble, Australian dollar, South African rand, and the Mexican and Argentine peso are falling fast as investors looking for a safe haven flee to the dollar, Swiss franc and Japanese yen.

And that’s why there’s an opportunity for folks like me.

There’s nothing wrong with my investments in South Africa. They still retain their fundamental long-term value. But the weakness of the South African rand versus the dollar means I can buy more of those assets cheaper right now.

The same is true of assets in every country now suffering because of contagion from the Turkish crisis.

That’s why crises in global “emerging markets” are opportunities. That’s how I look at them … and so should you.

The Tech Revolution Nobody’s Talking About