About a month ago I spotted a little-known opportunity for profit.

The play involved an outfit that had been mismanaged for years, but still had a lot of underlying value. They were due to choose new leadership in mid-December. The outgoing board had their slate; the reformers had theirs. I gambled that shareholders would go with the reformers, and markets would reward the outfit’s price accordingly.

That prompted me to go back and look for similar plays over the last year. There were plenty of them. But very few people benefited from them.

On average, over the last 12 months, making these sorts of investments would have earned you a whopping 70% more than the S&P 500 … and I’m convinced they’re going to repeat that performance in 2018.

The “stock” I bought in mid-December was the iShares MSCI South Africa ETF (NYSE: EZA).

My other home country has been badly misruled for a decade, but as I expected, the ruling party chose a solid reformer as the next president. Markets reacted accordingly, and I scored … but only because I pay attention to this particular emerging market and got in early.

You should be doing the same in 2018. I predict that emerging markets (EMs) are going to be one of the big winners of the year. 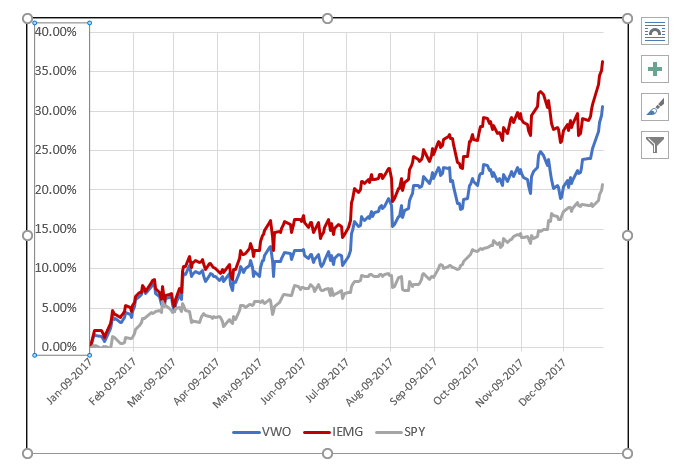 Part of the story is that the U.S. dollar in 2017 posted its worst annual performance in 14 years. That boosted foreign-denominated EM stocks in dollar terms. Indeed, there’s an inverse relationship between EM valuations and the dollar.

It wasn’t all just about the dollar.

2017’s EM performance was based primarily on strong corporate earnings growth. There’s no reason for that to stop. In fact, the consensus estimate is that EM companies are expected to deliver over 13% earnings growth in 2018.

There are plenty of reasons to expect that to translate into stock price growth in 2018, and by extension, growth in EM ETFs like VWO, IEMG and the iShares MSCI Emerging Markets ETF (NYSE: EEM).

Third, although much of 2017’s EM performance was due to a rebounding Chinese market, other regions are poised to join in. India is looking good, and Brazil and South Africa are coming off extended periods of weakness and are significantly underbought.

In other words, like my South African ETF, EMs are classic value plays right now.

It’s great that U.S. stock markets are at all-time highs.

But it’s a lot greater for people who bought into them a year or so ago. It’s highly unlikely that we’ll see another year of 20%-plus gains. Even if we’re not at the top yet, the rate of climb is slowing. It must.

Most institutional analysts see 10% to 12% growth in overall U.S. index valuations this year.

But it’s entirely likely that we will see another year of stratospheric gains in EM equities and ETFs. Last year, they beat the U.S. market by 70%.

If I’m right about EMs … and if the big banks and financial analysts are right about U.S. markets … investing in EMs this year could produce excess returns of 200% over the S&P 500!

You might have missed the start of the Great U.S. Bull Run, but there’s no reason for you to miss the next one — offshore.

Editor’s Note: Early investors in lithium mining companies made an absolute fortune when lithium was all the rage, turning every $10,000 invested into $100,000 or more. And if you invest in the little-known company that recently discovered a new deposit of a “magic” metal, you could see similar gains. Even if this company only grows half as much as the lithium companies … it’d be more than enough to change your life. To find out why this new supply crunch is even bigger than the one that caused lithium stocks to rack up massive gains, simply click here now.

Get Ahead of 2 Big Tech Rallies Now

Tomorrow’s Supercomputers Will Blow Your Mind