Home » Investing » Emerging Markets Are Safer Investments Than You Think

Emerging Markets Are Safer Investments Than You Think

I’m training my son to be a value investor.

He’s a little young to be buying stocks on his own just yet. But remember a few years ago when Sports Authority went out of business? When the store near us had its liquidation sale, guess who found a $300 youth league carbon composite baseball bat … for 15 bucks, flat?

His baseball team buddies still don’t believe him. He proudly shows them the receipt.

It’s the same thing with the stock market. By nearly every measure, our stock markets in the U.S. are about as expensive as they’ve ever been.

These days, where do you find the best value for the price of a stock?

Where to Find Value Now

Emerging markets are about as cheap as I’ve seen them in many years.

If you use a popular measure of value, like the CAPE ratio (short for cyclically adjusted price to earnings) pioneered by economist Robert Shiller, here’s how it stacks up:

The table speaks for itself. If the U.S. were a stock, it would be a solid blue chip. It’s high-priced, but with average gross domestic product (GDP) growth of 2.8% over the past four quarters — slow-growing.

Meanwhile, a market such as India is like a Nasdaq unicorn: fast-growing and full of promise for the future. Its economy grew at an average 6.6% quarterly rate over the past year.

Yet (for the moment) investors assign Indian companies a value nearly one-third less. Other emerging markets are in much the same boat.

That’s an important reason why emerging markets have such value right now, as institutions and hedge funds pile out en masse.

And sure, the Federal Reserve seems intent on raising interest rates yet higher. Higher interest rates mean a stronger U.S. dollar, weaker foreign currencies and lagging growth in their economies.

But how much longer can the Fed keep hiking rates without cracking the U.S. economy, as already-indebted American consumers buckle under the weight of even higher interest payments?

On that basis, emerging markets — with cheaper values amid overly pessimistic expectations of the future — are less risky than U.S. stocks, not more.

A Plan for Trading Emerging Markets

So let’s presume I’m right. How do we profit from this trend?

If you’re investing on a long-term time frame, an exchange-traded fund (ETF) like the iShares MSCI Emerging Markets ETF (NYSE: EEM) should make a good choice over the next two to three years. It’s down more than 15% since January: 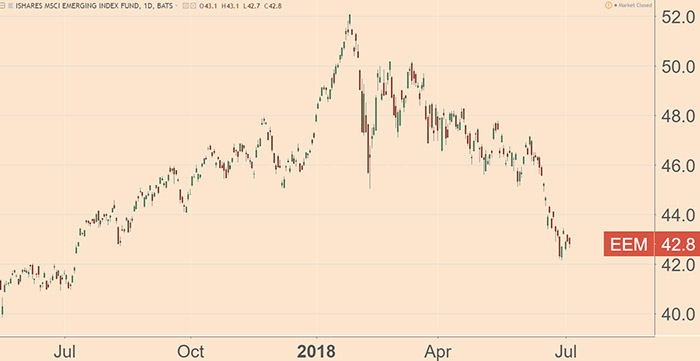 But from a shorter-term time frame, I would bide my time just a bit.

Presuming we see some kind of face-saving resolution to the ongoing trade wars situation in the next few months, that’s likely to encourage even more buying in U.S. equities heading into the end of the year.

The U.S. economy and equities markets are also still bathing in the afterglow of the Trump tax cuts, which means more bullishness for U.S. stocks for the time being.

But come the beginning of next year, the U.S. corporate tax cuts will be old news. The U.S. economy will also be facing the start of some tougher quarterly growth comparisons.

And the one thing that won’t change at all is the expensive nature of U.S. equities, relative to their emerging market brethren.

There’s just no getting around it. At some point soon, Wall Street will decide that even the FANG stocks — Facebook, Amazon, Apple, Netflix and Google — are just too expensive to own. When that happens, emerging markets will turn hotter, with higher prices to boot.

How CD Ladders Work Better Than Other Income Strategies