Tesla Topples, Ford Focuses & What A Load Of Croc

Great Ones, I’ve got some truly shocking news:

OK, so Buffett doesn’t “own” BYD Motors … he just controls a 7.7% stake in BYD through Berkshire Hathaway (NYSE: BRK.A). But it is very telling that the Oracle of Omaha didn’t take that same stake in Tesla.

Apparently, Buffett knows something that Musk does not … a lot of somethings, I’d wager.

But the proof is in the pudding, as they say. Q2 auto deliveries are starting to roll in, and Tesla finds itself shockingly behind BYD Motors for the first time ever.

And it wasn’t just a minor overtaking, as you can see below:

For those of you who like pretty charts, here’s one from Investor’s Business Daily that puts things in perspective: 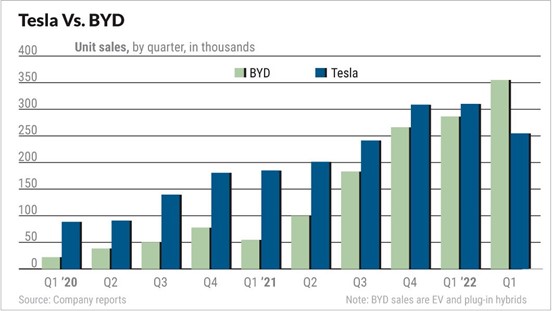 Making things even worse is that BYD Motors is just starting to expand beyond the Great Wall of China. More than 70% of BYD Motors’ sales come from the Greater China region. If Tesla doesn’t do … something … this situation is going to get even worse.

Now, I know that some of you Tesla fanboys are already frothing at the mouth:

This isn’t a fair comparison!

You’re not wrong. Tesla is still the leader in pure EV sales.

(Read that again and take a breath before you write in.)

However, you don’t just convince a gasoline-addicted consumer base to switch to all-electric cold turkey. Range anxiety is a very real thing. It’s the No. 1 biggest concern for potential American EV consumers — even though most daily commutes and travel plans fall well within standard EV ranges.

Furthermore, Tesla’s production during Q2 was limited due to the closure of its Shanghai Gigafactory.

And if you’re wondering why BYD Motors wasn’t similarly affected during the quarter, it’s because BYD Motors’ main production facilities are located in Shenzhen — a much less densely populated area of China with lower COVID-19 shutdown risks. 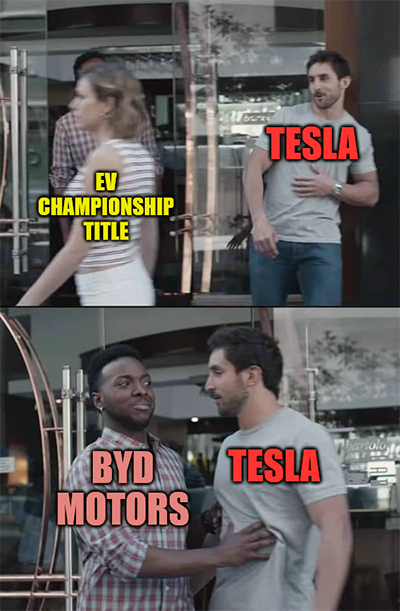 The real problem for Tesla will emerge when BYD Motors finally ramps up enough to go fully global.

By comparison, Tesla is slashing hundreds of jobs and will be shutting down its Berlin factory this month for retooling and upgrades.

In short, Tesla probably won’t regain its “King of EVs” title — in terms of deliveries — anytime soon. Certainly not in Q3, at least.

This is just the beginning, Great Ones.

As I’ve said before, automakers like Ford, General Motors, Volkswagen and Toyota all have considerably more robust manufacturing facilities and supply chains. When these global auto leaders finally go all-in on EVs, they will eat Tesla’s lunch.

Right now, Tesla is like pre-pandemic Netflix. It has very little serious competition, but numerous potential competitors with longer histories in the market. Netflix is now dealing with a flood of competition, just as Tesla eventually will.

And if Tesla doesn’t do something to solidify itself as the de facto EV maker in the U.S. soon, it’s gonna have a very, very bumpy road in the future.

So what’s an EV investor to do at a time like this? I mean, unless you’re comfortable with venturing into the over-the-counter market, BYD is out of reach for many investors. And unless you’ve got Buffett kinda money, you probably aren’t wanting to buy Berkshire stock.

Check this out instead: A former Tesla employee, who you could call the “father” of the electric car revolution, has recently created a device that is about to make world history. And it’s NOT a battery, solar panel or any clean energy you’ve ever heard of before.

He was one of Tesla’s original employees and the little-known secret behind Tesla’s massive success. But it turns out his new company holds the key to an explosive new energy revolution.

It’s no secret that car companies have struggled to shake off a seemingly never-ending series of drawbacks this year — whether they be from supply chain disruptions, COVID crackdowns or just plain ol’ inflationary fear.

Even the dons of Detroit have had to downshift into second gear as the new car market collapsed and penny-pinching has come back in vogue.

But fear not, Great Ones! Automotive investors can rest a little easier today knowing that rumors of one Detroit carmaker’s demise were greatly exaggerated.

Ford (NYSE: F) shocked Wall Street with surprisingly strong June sales figures that grew 31% year over year — even as Ford’s stock dropped to a new 52-week low. (You just can’t please anyone these days, can you?)

Remember, Ford recently added the F-150 Lightning and Mustang Mach-E to its lineup, which honestly couldn’t have come at a better time now that gas prices are going gangbusters.

As more people start to wean themselves off that tantalizing Texas tea, I expect Ford’s EV future to look very bright indeed. 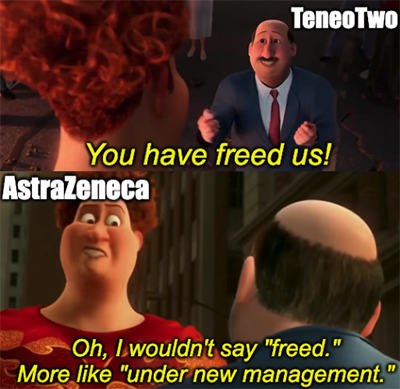 Biotech behemoth AstraZeneca (Nasdaq: AZN) has a serious case of the munchies. And the only thing that can satisfy its hunger is a hearty helping of TeneoTwo this fine Tuesday morning.

If the name doesn’t ring a bell to you, don’t worry. TeneoTwo is an early stage research company that makes antibodies designed to sniff out — and snuff out — cancer cells.

The way AstraZeneca sees it, TeneoTwo’s experimental tech will pair nicely with its already robust repertoire of blood cancer treatments — including its holy grail therapy for non-Hodgkin’s lymphoma.

AstraZeneca ain’t slacking in its buyout offer either. The company’s dropping $100 million on TeneoTwo to start, with potential payments totaling up to $1.27 billion based on different milestones it hopes to reach with the deal.

Investors tend to get nervous when companies start doling out large sums of dough all willy-nilly, so AZN stock dropped a bit on today’s biotech news. But this pullback should be short-lived, especially if the hype surrounding TeneoTwo’s pipeline is to be believed.

Wired magazine called this new tech “The Genesis Engine.” And McKinsey says it could create $40 trillion in new market value over the next decade.

It’s already helping over 30 million people worldwide. And as many as 2 billion people are projected to use this tech by 2025.

What exactly is it? Click here to find out. 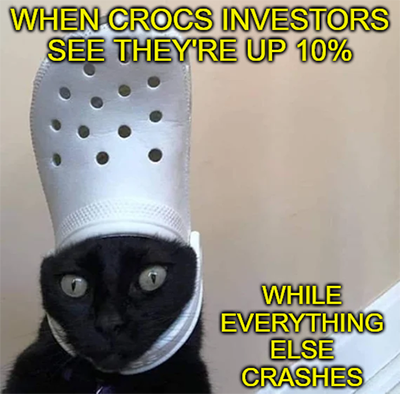 Please don’t tell me those rubbery monstrosities are the “best” part of today’s news. Please. Give me hope, man.

Umm, ackshully … I’ll have you know that Crocs are made of a proprietary material called Croslite™, which was custom designed for a lower carbon footprint. What is this, amateur hour?

I kid, I kid. As you can tell, we’re all about our Crocs (Nasdaq: CROX) here — the stock, that is, and only the stock. No, we just write about the cursed clog creations — not wear them. That’d be absolutely ludicrous.

But nevertheless, Crocs have not only survived the pandemic but thrived in it. And it just earned the stock an analyst upgrade, since so many folks out there are gung-ho about their clogs. (I see you, line cooks and dental assistants. I see you.)

At the time, we conceded that the combined Crocs/Dude company — say what now? — fit consumers’ need for comfy, easy-to-slip-on shoes. Granted, comfy shoes are vital, pandemic or no pandemic, but when your virtual coworkers don’t see above your waist … you’re a bit lenient on ugly footwear.

According to Loop Capital, the Hey Dude buyout is about to pay off … just not in terms of street cred.

Loop Capital upgraded CROX stock to a buy “despite the dodgy macro environment,” which I’d say is an accurate enough description of the current market kerfuffle. And since the sell-off has fried most of the market to a crisp, CROX is now attractively cheap, unlike literally any other shoes you want to buy.

But do you want to buy Crocs stock? I mean, really think about it: Do you?

Let me know your thoughts on Crocs the clog cobbler, Tesla versus BYD and the best of biotech buyouts in the inbox. Drop us a line at GreatStuffToday@BanyanHill.com! 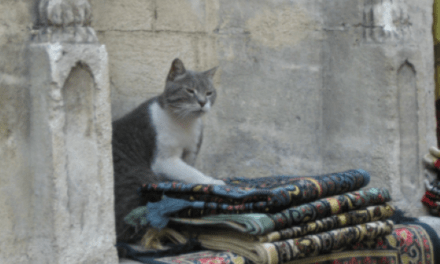 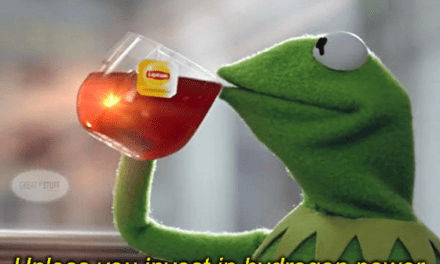